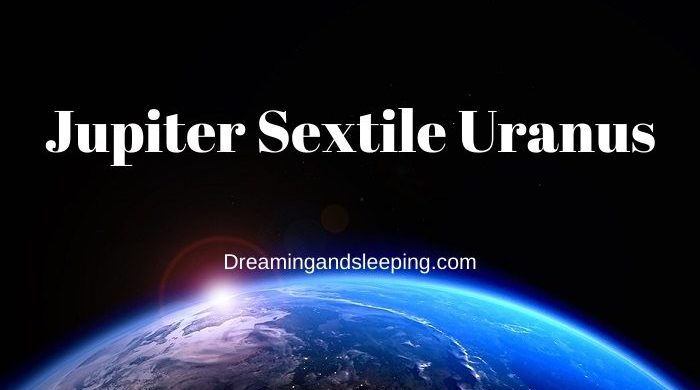 We will tell you that you need to look for the sextile or trigon positions in your natal chart so that you find out what are your personal strengths, and what the best time is for certain things.

Today, we will dedicate our time to one interesting aspect – a sextile position that is formed between planets Uranus and Jupiter.

This is an aspect that points to last-minute rescue situations, through the synthesis of Uranus, which is synonymous with kindness and Jupiter, bringing happiness into the aspect of altruism.

Think of this connection and all benefits that it can bring on every level.

This sextile is very interesting to look at since this transit is best seen in the lives of the people who have set their minds on a goal; these are humans who are ready to relate to the willingness and open mind that will lead them to the desired goal.

They are often driven with the altruistic motives, and even if this does not seem like it since they can lead lives that are filled with sins, they are able to help people or to lead them with their example.

This sextile effects in a way that people who are affected by it are prone to unbiased thinking and modern understanding by adopting modern ideas and innovative approaches that can provide progress – this is true whenever Jupiter and Uranus are together. 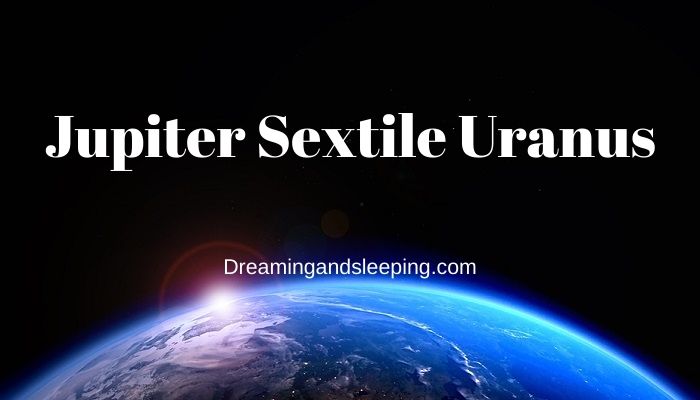 Of course, all of this depends on other aspects in the natal chart, but if things are aligned in a positive way, they can use this sextile in the best way possible.

The sextile position that is created between planets Jupiter and Uranus means the occurrence of complimentary chances or sudden luck so that there can be sudden upheavals in many fields of life during this period.

This is the time when many changes on better could occur, and on a personal level, people could use their inner strength for making life better than ever before.

Even if they are fighting with their inner demons, they are able to give themselves to others and to help them overcome any difficulties in life.

These people are happy and blessed with the incredible amount of knowledge, and they live in a wealth of new ideas and plans, there is also a desire to reform existing business levels, a desire to travel, an extremely fast understanding of situations and efficiency in solving them.

It is not maybe an easy task to follow them, but it is always interesting to do so.

People who have this aspect are prone to the sudden confessions, and they are often seen in times when they are saying something shocking about themselves, all in the attempt to use their honesty to make life more clear.

For some, this aspect of their personality is not so positive, and it is maybe better to keep some things hidden, but they cannot help it.

As we have said in the previous section, people who have this aspect in their natal charts are able to have a duality in lives – they can live sinful lives that are filled with secrets, and to provide amazing work or help others with their issues.

Some of them, if other aspects in a personal horoscope are bad, can lead tragic lives that are filled with doubts. What is even worse, they can be tormented with the past, even if they are doing everything to reach the future.

In life and love also, people who have this aspect could be drawn to some extreme behaviors that are completely unexpected for the majority of people.

They are passionate people who want to discover as much as they can about their own personality – but this also means that they can fall into some more difficult perspectives in their lives.

They often seem like those who are in a constant opposition in love, and it seems like they want to calm down, while in others, they are crazy and cannot be settled.

In life and love, those who are under this sextile position have light-dark, warm-cold, conscious-subconscious, passion and pain, and everything is mixed and therefore interesting and problematic at the same time. But, it is never boring, be sure of that.

It’s hard for them actually to choose sides, and we want to say that they should follow their heart because here is the point that they need to balance. It is the hardest part, but no one said that this aspect could not be a difficult aspect.

When they are following a path toward something or someone that they think they need to be with, it usually leads them toward separation. And here, we use this term very deliberately, since it has many layers and all of them are equally relevant for the understanding of their personality.

Not just that that can “separate” from their loved ones, it is also possible for them to separate from their emotions and true self – what is not chosen is usually suppressed, denies. And that doesn’t go away mostly just what is wanted even more.

The main thing is that these people do not choose their careers with their minds, to do it over rational; they need to listen to their inner voice.

In this sense, people who have Jupiter in the sextile position with the planet Uranus must choose a side anyway.

The other one is usually suppressed, ignored or something and it can lead them to failure, to a situation of isolation, isolation, there is a feeling of rejection and the like.

The best possible scenario for them is to follow their inner voice and to develop even more their talents or their passion.

They can truly make in it in any business they choose since they are blessed with the revolutionary ideas and prone to reformist change, so here Uranus creates a rewarding trigger with Jupiter, creating the intelligence of a modern scientist or constructor.

Unusual and unexpected events that cannot be predicted bring about sudden favorable changes in life, whether it is an unexpected inheritance or a long-awaited scholarship, but more importantly, this is an aspect that can bring about a positive outcome in every risk.

With this aspect, it is not possible to make big plans without risk – it is always involved in the picture, and it is always a part of the road, but will it be paid off is another matter. And what is even more important they are more than ready to take that risk, because they do not see it as danger.

This is an aspect of human happiness, so anything that is risky improves the material situation.

It is a long-lasting aspect that some astrologers describe as the Santa Claus that brings you gifts, and even if you have not been too good, you will “receive” something from this aspect.

So, when the sextile between Jupiter and Uranus is active, those are the best times for travel or foreign trade, and you can expect profit. It is said that this is a time that is especially a fruitful period for writers as it brings success in negotiating with publicists.

This is the aspect that is best used for those who crave a drastic change in attitude towards life, and their ideas could be unexpectedly and suddenly expanded thanks to other people’s experiences, which will motivate them to engage in socially active issues and fight for others’ rights.

You could imagine how much potential this aspect carries, and it is up to you will use it, and it all comes down to the personal initiative.

This is the aspect that will reward you if you are open to new ideas and are always ready to learn.

How will you know what to do – you intuitively feel your life opportunity.

During the aforementioned period in the culmination phase, you should be open-minded and take on all the new challenges. As we have said, the risk in this sextile is no danger, it is the chance to reach something where you have never been before, and the only thing that you should “worry” is the idea that there you will be alone.