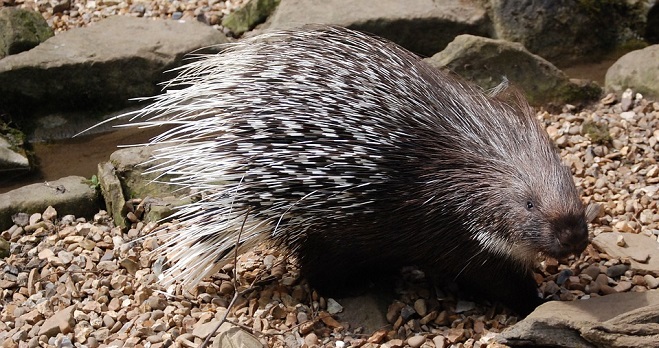 Porcupine is a small mammal that inhabits Europe, Africa, and Asia. They have been interesting to people because of the quills they have on their bodies.

These quills protect them from predators and other dangers in nature.

Because of its interesting looks, porcupines were often used as symbols or totems in different ways.

They are considered to be symbols of strength, protection, and kindness. In modern culture, they are still very popular and their symbolism hasn’t changed too much.

Strength – Porcupines are strong little animals that can endure a lot of things. Quills on their outside protect them from getting injured in nature and also help intimidate predators.

Deception – Even though their quills look dangerous they are not very harmful to other animals. They are still far away from blades and sharp spikes, but they serve their purpose.

Fearless – Porcupines are quite fearless and they don’t let larger predators to intimidate them. They will spike up their quills and try to scare away an animal twice its size. This helps them survive in nature and in life.

Porcupine as a totem

As totems, porcupines are very interesting symbols. They are symbols of strength, fearlessness, family, deception, and humbleness. All of this traits combined together, form a very interesting personality that is both courageous and kind.

People born under this totem are very tough. This toughness is something natural to them and it comes out in their behavior and appearance.

They have a bit strong approach to others but this doesn’t mean they are not good people. They are simply not sweet and mild in their everyday encounters.

People born under this sign are also very protective. They are always there to take care of people they love and make sure nothing happens to them.

Protecting their own lives and everything in them is another thing they feel obligated to do, so anybody who wants to disrupt their life would have to work hard.

Porcupines are also symbols of family and mating. They usually have large families with a lot of children and they enjoy a quality time with their family members.

As totems, porcupines represent kindness. They are genuinely kind and sweet people, even though their outside says something completely different.

When you get to know them, you won’t be able to believe that this is the same tough person from before.

Porcupine people are also symbols of deception. This means they can often seem like tough and unapproachable people but in reality, they are kind and gentle. All you have to do is get to know them and get past their “spiky” outside.

Porcupine totems symbolize humbleness. This means you are not someone who flaunts around with things you have, and material things don’t really make you happy.

You enjoy simple things in life, like spending time with your friends and family or taking a nice vacation. You are a hard worker who appreciates other people’s efforts.

This makes you a good friend and partner.

Warrior behavior is something natural to them as well. They will fight for what they believe in and nothing can stand in their way to success.

They have a strong character that attracts a lot of people and makes them fall in love with their beautiful souls.

Porcupine as a symbol in a dream

Porcupines in our dreams can have different meanings. They can bring us positivity and happiness and in other cases, they can warn us about the upcoming disappointments.

If you saw a porcupine running towards you, in your dream, then this dream is a representation of enemies that lurking to get you.

These enemies have made plans to destroy your reputation and success.

If you saw a dead porcupine in your dream, then this dream is a representation of a victory you are about to experience. This victory can be of personal or business nature.

Either way, you will be extremely happy and thrilled about your success.

If you saw several porcupines in your dream, then you feel an incredible amount of power and strength in life. You feel like there is nothing that can stop you in life and you are on a safe road to success.

Porcupine as a symbol in different cultures

Porcupines in different cultures have similar symbolism. They are mostly symbols of strengths, family, humble way of life and toughness.

In North America, porcupine quills had an important meaning. They were used as materials and Native Americans made bowls and trinkets from these quills. Jewelry and decorations were also made out of porcupine quills, as well as baskets.

Porcupines were also considered to have medicinal powers. Eyak people used porcupine soup to promote lactation. Porcupine oil was often rubbed on infants in order to ease off their cramps.

In popular culture, porcupines are mostly used as characters in cartoons and movies.

Even though their popularity is not as big as some other animals, they still carry a strong symbolism within them. They are often used as tattoos and the symbolism of these tattoos is the same as the one in totems. They symbolize strength, a power of will and family values.