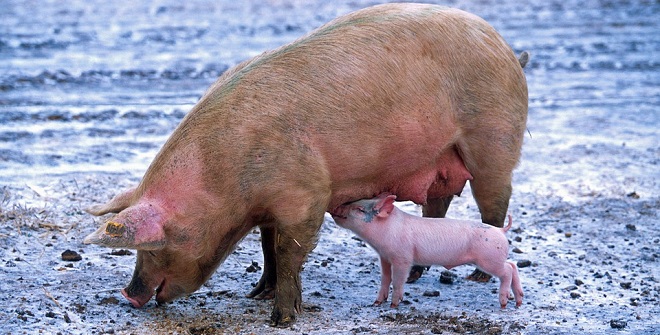 Pigs are domestic animals. They have been people’s companions for centuries and without them, humans would have a much harder time to survive.

Even though pigs are often just seen as a source of food, they do have a strong symbolism attached to them.

Being next to people for such a long time influenced the development of their symbolism.

In popular culture they are every bit as popular as they were in the past and meaning of this symbolism varies from culture to culture.

Intelligent – Even though pigs are only used as a source of food, they are very intelligent animals. They seem to have a higher intelligence than other domestic animals, which only makes it harder to imagine what must be going through their minds right before they got turned into food.

Laziness – Pigs are extremely lazy. This is actually the reason why people were able to domesticate them. The one thing they enjoy in life is food, so it wasn’t hard to lure them to us. Pigs spend their lives just roaming through woods searching for food or simply eating what we offer them if they are domesticated.

Omnivorous – Pigs eat everything. This means they can eat anything you put in front of them and they will be happy. This makes the job, of taking care of them, easy.

Pig as a totem

As totems, pigs are symbols of good luck, laziness, lust, finances, and fertility. People born under this totem or protected by it are very lucky in life. They tend to get the best jobs, best partners and overall their health is quite good. 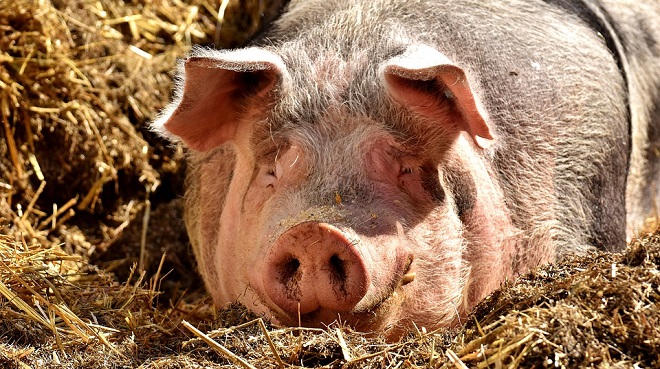 When you see someone and everything seems to be going in their favor, then this person is probably protected by this totem. These people are also very money and business oriented. Their biggest accomplishments in life are their careers.

This is the main area of focus in their life and they invest a lot of time and effort into it. Everything is perfect when this love for work is normal boundaries, but when they cross this boundary they can become greedy.

This is considered to be the worst characteristic they possess. Greed is something that is natural to all people born under this totem, but some of them can control it and others can’t.

Pig totem is a symbol of fortune and fertility. They enjoy having big families and a lot of children. Some might even consider this to be a fortunate way of life, so their luck spreads both ways.

Something that I quite interesting, considering their wealth, is that people born under this totem are lazy. They simply don’t like working. Instead, they use their intelligence in life to make connections with the right people and climb their way to the top.

So, while others are working hard to achieve their dreams, pigs simply have to be at the right place at the right time (and they always are).

Having this kind of luck in life is often hated by others. They can’t let go of the fact that these people seem to have it all. That is why people born under this totem can develop a lot of enemies along the way.

Another negative side to these people is that they can easily give into their desires. These desires will either take them to high places or completely ruin them.

Overall, people born under this totem are well protected by divine forces and they seem to be born under a lucky star.

Pig as a symbol in a dream

Dreams about pigs can carry a valuable message. If you saw a pig in your dream, then this dream represents something positive that is going to happen to you. This can be related to your career or personal life.

If you saw several pigs in your dream, then this dream is a representation of unpleasant situations that are coming to you in the near future.

These situations could carry a valuable lesson so make sure you learn it.

Dream about a pig and piglets is a symbol of victory. This victory could be related to your work or personal life but either way, you are going to come out of it as a winner.

Dream about pigs in the mud is a representation of unorganized and messy life you are leading. Perhaps you are unhappy with it yourself but you don’t know how to get out of this situation.

If you killed a pig in your dream, then this dream represents something positive that is going to happen to you. You might even get a promotion at work or a new work place you have always dreamed about.

Pig as a symbol in different cultures

Pig is a very positive symbol in many cultures, and it is mostly related to wealth and fortune.

In Chinese culture, pig is one of the symbols of the Chinese Zodiac. Pigs in China symbolize prosperity, luck and fortune. Pig statues and small figurines are often used in Feng Shui to attract positive energy and money into people’s homes. When you think about it, it is no wonder that we all have “piggy banks” to keep our money in them.

In ancient Egypt, pigs were related to the goddess of fertility Isis. This was one of the most important deities in ancient Egypt so pigs were considered extremely valuable.

In Native American culture pigs were considered to be valuable as sacrificial animals. Sacrifice to the gods could only be made with something that was very important to the tribes. They would sacrifice pigs to the gods and prayed for the rain to come.

But, pigs weren’t considered valuable in all cultures. In Islam, pigs are considered to be dirty and their meat is forbidden to the true Muslims.

They portray pigs as greedy and filthy animals and her only purpose in life is to feed and sleep.

In George Orwell’s novel “Animal Farm”, the pig is portrayed as the leader and the wise one.

However, more people use the word pig to describe personalities that are lazy and not so praise-worthy.

No matter how pigs are seen by certain cultures, they can still teach us valuable lessons in life. Pigs are ambitious and confident animals.

They know how to enjoy life to the fullest and take what belongs to them. Their symbolism continues to change into something negative, even though we owe these animals a lot and should be respecting them like our ancestors did.