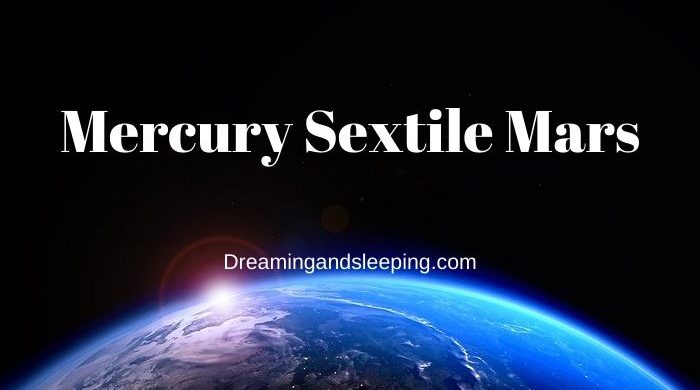 As you already know, the sextile in a horoscope is not the main aspect, but it could be truly influential if positioned in a certain way (between certain planets); in this case, we will speak of the one that is created between Mars and Mercury.

For the start of this story, we must speak a bit more about the Mercury, the hot planet, that is radiating so much energy, since it is closest to the Sun, and it bears the name and embodied archetype of the youngest Olympic deity – Hermes, or Mercury, as this god of knowledge and wisdom was called in ancient Rome.

This is reflected the people who are connected to the planet Mercury in any way, but here that impact is even stronger and with the incredible amount of energy.

The planet Mercury is the symbol of everything that has to do with the communication, information, and here it is connected in mostly good combination with the planet Mars, that is connected to the powerful energy and strength.

You can only imagine how strong this combination is, and what kind of effects this sextile brings into the lives of those who have it in their natal. Of course, even the sextile is positive in general, and it can bring to the surface some negative traits, that are not as bad as such but could lead to some negative actions.

So, you should look at Mercury as it is the sign of all communication, and here it is connected to the planet Mars, so the astrological symbolism of all aspects is certainly under the influence of this planet.

In some ways, the aspect that these two planets create is advantageous ones and his potentially challenging aspects that create images in the lives of many.

Such aspect provides the essential images of the given aspects, which in the life of these people who have it, can be expressed in a mitigated and reduced form if indicated by other planetary aspects and horoscope indicators.

Here we can see the energy along with the strong verbal expression that rules their lives, and in this sense, you can look at this people as the ones that when they speak, their words are cutting to the core. 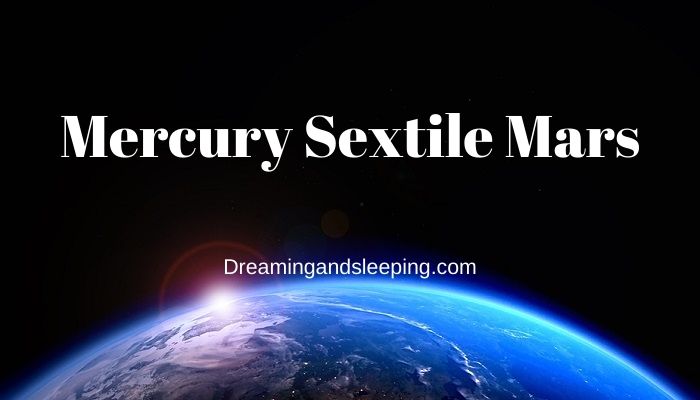 Some say that their words cut like a baled and that sometimes, they very accurately capture the most sensitive places of the human soul.

We can call them verbal surgeons -they cut when others do not have any courage to do so, and in this sense, this is their strongest and weakest trait.

In the beginning, we will tell you one thing that you should use as the double-edged sword.

On the one hand, mental processes are accelerated, sharpness, ability, quick reactions and resourcefulness are accelerated, but on the other hand, the unpleasantness of verbal expression, ferocity, manipulability and some other, much less malefic things can be encouraged.

The main thing in their lives is to find a balance, so that the good aspect never falls short, and that they do much better things then bad ones, even if they do not have bad intention in the beginning.

There are so many good traits that are connected to the character and life of these people – they have a great speed of thought, practicality, and a sharp mind.

Whatever they think and whatever they want to do, they have brave and daring ideas that unlike some others, they can turn into reality.

The fact is also that those who have this sextile in their natal charts are people with a lot of courage in the decision-making process, but also the ease of recognizing others’ weaknesses that they can use, but in their heads, this is for the greater good.

In many cases, these are the people who came from rags to riches and who can learn all others how to live in this way, how to make a life worth living, by overcoming all obstacles.

From a negative point of view, we could say that these people are those who speak and think too quickly, and at times sometimes they could not be understood.

Also, they could become such an irritating and over the top persons who do not ever shut up.

It is true that they have intellectual sharpness and speed give him the ability to process a lot of information in a short time – but this also means that they could never be dedicated to just one thing at the time, but they are giving their energy to many different places at the same time.

Not good, and in this sense, this sextile may color this personality with bickering tendencies that he does not spear anyone, and they are not loved because of it.

Also, these people are adorned with the high impulsiveness, irritability, impatience, and intolerance of others’ opinions and criticisms.

You should choose one of these people to be your lover if you are interested in being in love with people who are very lively, naughty and restless. They could be hyperactive as well, so sports activities are very important for their physical development in order to learn to channel the excess energy they are endowed with – if you are in love with them, count that you will spend some time outside and you must love sports games.

They need someone who will alleviate their fiery nature, and who can deal with their strong sexual energy- the bed is one of the most important places for them, and you have to meet them with all of the things that they deserve or think they deserve in this area.

Having said all of this, you could guess that these are the people who have lightning reflexes, fast movements, they love to be involved into some fights, competitions, and they can become boxers and athletes.

The hands of these people are very skilled, so these can be great craftsmen, modelers, but also exceptional painters and sculptors.

Some of them like speed and general aspects in life that take some risk into it, so they see everything as the adequate sporting discipline in which to achieve great results.

Those who know say that people with this sextile position have a great mind of a brilliant strategist and planner, who are able to lead others with their initial ideas.

The speed of words and thoughts gives lightning ideas but also the need to enter into controversy with dramatic charge.

This aspect is also evident in the speed of movement, but it is certain that it will also affect others who are close to them.

The love of excitement imposes on them a passion for speeding, but in this case, the bad aspect of Mercury and Mars will bring potential traffic hazards, as well as frequent penalties for misdemeanors and speeding

Some of them are so dedicated to hard work that their mind is working at high speeds, which is why insomnia is certain in their case.

They do not like to sleep, and they like to spend most of their time “doing” something that will help their careers.

You could see, there are both good and bad sides to these people – in the natal chart Mars connected to the planet Mercury could and usually is contributed to the great impulsivity, selfishness, intolerance, harsh and quarrelsome words, cynicism, impatience, anger, hatred, mental aggression directed at others, arrogance, as well as making reckless and impulsive decisions.

In fact, these people have the biggest problems when they make hasty decisions that will most often blame others, which leads to an unending cycle of debate, strife and inactivity.

In the worst-case scenario, these people are portrayed as thieves and cheaters, which do not exclude the possibility that the owner of this aspect possesses the character of a latent criminal in him (and if other aspects of the horoscope indicate it).

But the advice is that they should reduce this tendency to the minimum and that this phase is reserved for the certain stage of their lives, not to be their habit and a way of life.

These people could be extremely sensitive with this aspect, because during it they themselves can be exposed to roughness, beatings and torture, as a result of which they themselves move through crime.

Beats and injuries to the body and head are an integral part of their growing up, and during their lifetime they can suffer from severe migraines and be at risk of stroke and high blood pressure if the rulers of the 6th house are covered by this aspect.

A person with this aspect can also have a large circle of friends among people from the margins of the law, which can serve as great couriers in dirty jobs.

Now, when you know what kind of bad and negative things are there as a possibility in the lives of people with this aspect, you know that you do not have to go with this road and that you can transform it into something worth living.

You can use all that you have been adorned to make your life worth living, mainly if you help others with your negative experiences.