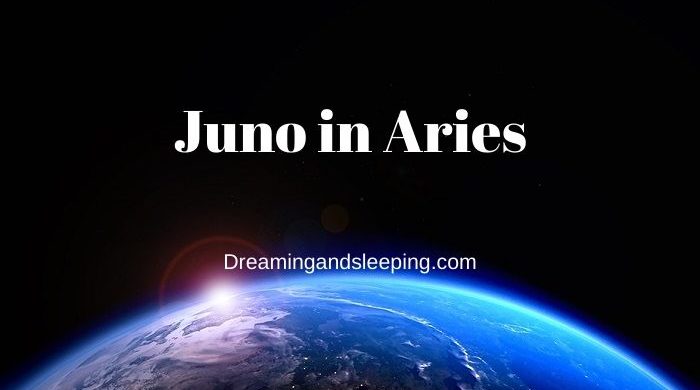 Juno position in the personality field pressures you to form a community and to be in a couple, but this opportunity is often hindered by your strong individuality, the need to impose your personality and various love challenges.

Unless you get married early and abruptly, your choices will be pretty positive when you have a little life. This position signifies a kind, enterprising, active and ambitious spouse.

Such traits can lead him to business success, especially if he is pursuing a solo job.

His poor trait is impulsiveness, which can provoke conflicts, as well as the need to impose his views and dominate, which can be a problem in your marriage.

Therefore, he needs a degree of independence and freedom in the relationship as a solution to these challenges.

A partner can be active in sports because he has such talents, or in his business he wears some kind of uniform. Juno strong need to establish harmony in emotional relationships forces you to align with your partner.

It will not always be easy, because you are guided by the sign of Mars, which values ​​freedom and independence, so you too may struggle with the need to impose your will.

So, it depends on how much you integrate with your partner and whether you manage to be flexible and adaptable.

The zodiac begins with the Aries sign. This sign symbolizes a newly born individual who needs tremendous energy, vitality and strength to grow. 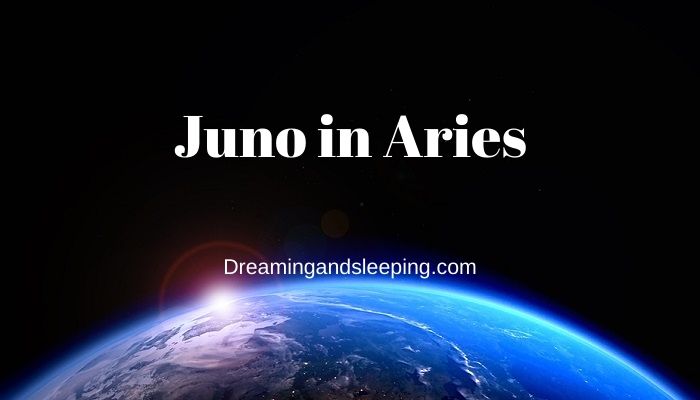 Awareness of being the first determines both the psychological and physical life of Aries.

Namely, at the deepest foundation of his being, Aries believes that he is predisposed to a leader who has no right to error, and therefore behaves in accordance with this belief in life. There is no impossible goal for him, giving up and withdrawing are words foreign to his nature.

His ruler, daily Mars, urges him to violently and uncompromisingly overthrow all obstacles, in an effort to realize his ideas. Even when destructive, Aries is not vindictive.

In the eternal observation of new actions, he does not have time to over-analyze the motives behind the behavior and actions of the people around him.

He is like a newborn baby, most often to all those who try to slow his rhythm, or challenge his life postulates, react with noise.

Like a child, he doesn’t think much about the past; his gaze is always directed to the marvelous distances of an ideal future of which he is, of course, the bearer.

Because of the natural openness, people born in this sign can very often be indiscreet and may conflict with more sensitive and subtle zodiac subjects. Interestingly, Aries rarely notices that he has hurt anyone, except in cases of direct conflict with him.

If you become silenced by the insult, or look at it desperately and sadly, they will not understand what it is at all. Intuitive sensing and recognition somehow go wrong with this overly optimistic and dynamic nature.

But if you tell him directly that you have been hurt, Aries will still, even astonished, stop and even reconsider his actions.

It is a true art to endure his anger. Fortunately, dictatorial outbursts of this kind pass away quickly. Behavior in the style of “who endures well and who doesn’t care” can bring a host of enemies to life for the rams.

Therefore, it is of great importance to teach them compassion and compassion from an early age. In any community was possible.

You will recognize it by its looks, it looks dignified, whether it’s quiet or noisy. He is direct, self-centered, self-loving, conspicuous on the outside, mostly tall, in love, intolerant, self-confident, ambitious, doesn’t like complicated life situations.

With him it is better to avoid conflicts, he can be very rude, but also very delicate if it is in his personal interest, or if he is explicitly motivated, especially in love.

He likes to travel, socially, the type of athlete, though on the team he has to be in charge.

He is excellent at what he does, especially if he is fortunate enough to deal with something that suits him best.

If he gets a job in a workplace that he is not interested in, he is inert and free-spirited. Fortunately for him, he mostly fights for his place under the sun.

No matter how open-minded you are, you are never sure what he really thinks, because despite all the impulsiveness, he can be careful as well, since he has a strong defense mechanism, more on the mental than the emotional plane.

You hardly settle for second places, if you’re not the first option for him or her, it’s ruled out. You are not interested in a super planned or pompous marriage, as long as it fulfills the ritual and legal function it can be an express marriage and you would feel good about it.

If Juno is retro you probably have some phobia of marriage because you cannot stand the idea of losing your independence that can even make you fond of banned or impossible couples because they are “safe ground.”

Finally, in your marriage the leadership role will be notorious whether you assume it or project it in the couple, one of the two will always be the one who takes the initiative.

Aries is the most aggressive of all the signs of the Zodiac, which is not surprising when we know that it is dominated by Mars – the god of war.

The energy of the persons born in this sign is well distributed at all times: to lead and to prove itself constantly.

The most striking character traits of this character’s people are the simplicity and naturalness that surely guide them through life. Mostly for Rams, the situation is black and white, yes or no!

They are leaders, not only because of their example by encouraging others to follow them, but also because they have an innate need to be at the center of events, above all others. “First me!” – This is a common thought of Aries.

And all because of the overwhelming need to lead, and to impose some!

On the other hand, they have a strong need for freedom. They cannot function if prohibitions and conventions exist.

For them, this situation is just unbearable and they are ready to do something to get rid of the clamp.

But they are quite cautious about others. They try not to jeopardize the needs of the people around them. Because of this feature, it is quite difficult to keep them at home.

When Aries wants something, they usually get it. Their selfishness is similar to that of young children. Their harmlessness mitigates their aggressiveness. Rams go straight to the core of things.

There is nothing hidden or complex in them, no trace of tricky fraud. They remain so for the rest of their lives, believing in all their hearts, falling and rising fearlessly to try again. The rams are easily exposed when they lie.

He is not subtle, tactful or humble. Honesty, directness and honesty are his main attributes. It’s not harsh. With a little modesty, his creativity, ideas and intuition could guide his environment.

Rams have a difficult nature, but their anger quickly gives way. They tend to react quickly and make conclusions and move constantly. Tiny things bother them.

They are also prone to humor – usually with a dose of satire, but one that relaxes and soothes tension.

Holding them gives off a lofty ego and confidence. Deeply vulnerable, it will take some time to recover – but be sure they will!

Although Aries is fearless and bold, enterprising and full of initiative, he does not endure physical pain. The doctor is his last friend.

Because of strong optimism, he is rarely susceptible to chronic diseases. In love, the Rams are sensitive and extremely passionate.

They do not let their partner restrain them. And in friendship they are persistent but very demanding. They do not want to adjust, but they require it from others.

Aries is the first sign of a horoscope, fiery element and cardinal quality. The Ruler of Aries is Mars, the planet of energy and action, which is credited with being strong, ambitious and eager people who want everything and this as soon as possible.

They are best when they come up with an interesting idea, the detailed realization of which they will gladly leave to other patient characters.

They have enormous energy and work force, often work in police, military or inventors. It’s good to have him as a co-worker because he will always be happy to come in to help you and will certainly never work behind you.

Aries rule the head area, so members of this sign are often prone to migraines, headaches, sinus problems, and often they also have difficulty seeing.

They are prone to inflammation, viruses and injuries, and often have heart, cholesterol and high blood pressure problems.

Stress and fat-eating diets are devastating for them, so they should lead a healthier lifestyle and find an exhaust valve to counteract the accumulated negative energy and frustration.

They pair best with other fiery characters, Leo and Sagittarius. All three are energetic and courageous people who love new experiences and together enjoy a rich social life and many fun activities.

Scales excite and attract them, Capricorns are too serious, and Crabs are considered too sensitive.

The connection with Scorpio is marked by fierce strife and tumultuous reconciliation, while with Taurus they can find happiness if they both control their stubbornness.

Gemini and Aquarius are both ideal life companions and loyal friends, while Pisces is interesting, but over time, they may be bored by their over-emotionality.

When Aries wants something, they usually get it. Their selfishness is similar to that of young children. Their harmlessness mitigates their aggressiveness. Rams go straight to the core of things.

There is nothing hidden or complex in them, no trace of tricky fraud. They remain so for the rest of their lives, believing in all their hearts, falling and rising fearlessly to try again. The rams are easily exposed when they lie.