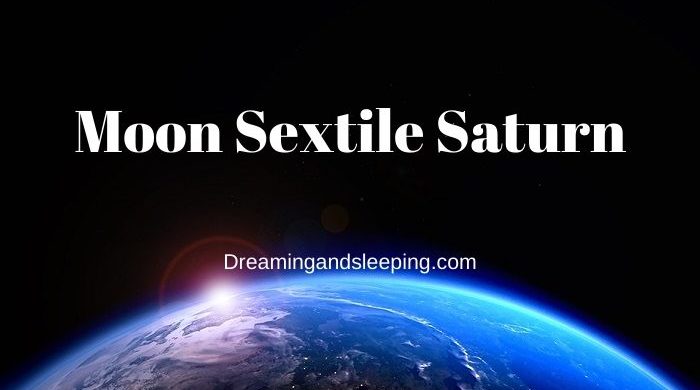 Any contact that Moon makes with the planet Saturn could be seen as a difficult one (this comes from the fact that these two planets have different energies, one is mild and sensitive, other rigid and cold) – but in the natal chart, this is the aspect that is also seen as important since they can determine many relevant aspects in a life of a human.

We know that the sextile is a positive aspect that brings out on the surface many positive.

But in the case where the Moon is in the sextile position with the Saturn, then, such traits may need some time to get out on the surface, or they will do it with some difficulty.

Here, we will speak more about the planetary aspect sextile – between the Moon and Saturn, and if you have such an aspect in your chart, read this piece very carefully.

In some general way, such an aspect responds to the existence of psychological anxiety, challenges in emotional feeling, alienation into self, insecurity, lack of vision, embarrassment, lack of trust, restraint in showing sentiments (or exaggeration), and also it could speak about the emotional vulnerability.

As you can see, all of this speaks of emotions, just like the Moon in the personal chart is always connected to the inner being of a human, to his or her soul.

Otherwise, there is clearly an over-emphasis on duty, without warmth and spontaneity (all this comes from one and the only planet Saturn).

The relationship with people could be very complicated, and there can be a lot of misunderstanding, but it is also an aspect that could be overcome. It is not a death sentence, but the road is long and hard.

To some extent, the sextile aspect is considered favorable because it helps the person to build the confidence needed, but on the other hand, its negative impact can be seen in the health field (as you could imagine the jeopardy of health comes from the inner cause, nor an outer). 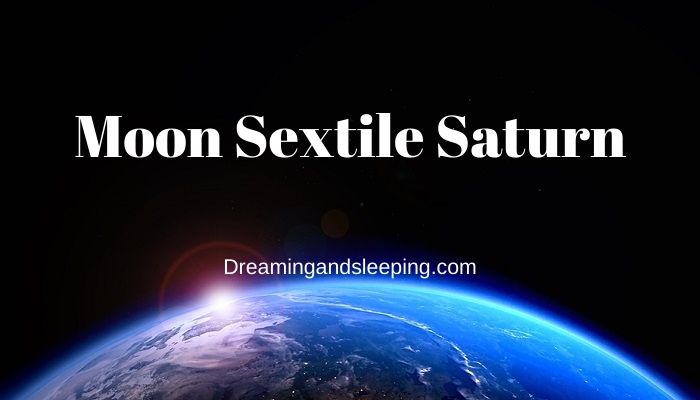 Although this aspect is in astrology considered favorable, the Moon in the sextile Saturn can give some problems.

You must have in mind that the Moon that is seen in the natal chart is the one that represents that indication about your own emotional security, caring for others, while Saturn rejects everything unnecessary, striving for self-discipline, which makes it too rough for the tender and emotional Moon.

But, when other aspects are in a good position, then such a combination can bring good.

You can see in the example of Frida Kahlo and Amy Winehouse how the road can be tragic, besides all the talent that they have.

Even if others may look at them as people who are usually behaving in a gentle way – but we are saying that this is not a bad thing, on the contrary, it is a good trait.

And even if we know that the Moon and Saturn represent two completely different energies, they can give the best one from another, and one can calm down the other, etc.

The Moon aspect in the sextile with Saturn is characterized by the expressed power on the way to the goal achievement – the power that the Moon itself lacks.

What is even more, this sextile will provide such conditions that can teach persons (who have it in their natal chart) how to develop their endurance, be more patient and emotionally stronger – this is the stage in their lives that may come in mature years of their lives, but when it comes they remain very stable.

This is an aspect that encourages responsibility and a healthy approach to life, and if you start building your life from this basis, only the sky is the limit.

On some deeper level, right after a classic natal explanation and commenting on good sides of this sextile position, this is the aspect that brings high sensitivity, and whatever these people do, it will stay like that.

And for that matter, these people who have this aspect in their natal charts are seen as distasteful and usually do not hide the cold part of their hearts that is in fact, their shell and protective armor.

In the intention to make up for this denial, they are ready for anything – which is the reason why they, at times go to the extreme, as you can see in the biographies of the famous people, like for example Amy Winehouse.

Here, the principle of Saturn’s overcompensation is most visible – otherwise, this aspect contributes to a person’s cold response in some situations- even with the people who are close to them.

And this shame, since deep inside there is one warm and tender heart that hides and wants to be loved.

Saturn represents new experiences, and its role is to “impose” pressure and numerous lessons in order to receive reward and wisdom – everything that is connected to bring a reward, but the one that comes after pain.

The Moon, unlike Saturn, refers to the emotional field, our feelings, our kindness, and how we find consistency in life – this is true even when males are in question.

The Moon always receives other people’s influences, and that is where the biggest problem lies – these people can have a problem in love since they fall in love and stay with lovers that are not suitable for them, and they take some bad habits from them, they lose their identity.

What these people need in love is someone who will hold gravity and establish order when that order is broken, so they lose that inner feeling of losing ground under the feet, there is no gravity.

Likewise, all that help in life must come from someone.

The biggest problem is that most people do not let other people into their lives but restrict themselves to their world and do not want to see the light of day. That is why depression, psychological problems, isolation from the world most often occurs.

The main thing is that the Moon, when connected with the Saturn, can bring long-lasting relationships, a sense of attachment and strong sensuality – you can imagine how these people can show love.

This aspect gives the potential to build stability, readiness for commitment, mutual support and focus on achieving common goals. This aspect always a hint of emotional stability and practicality because Saturn in sextile supports whatever the Moon wants or desires.

So, the stability and comfort in the love zone could be overcome only after some time.

In order for these people to have some success in their work, and to avoid all difficulties that their life path can bring to them, the two planets must cooperate, Moon and Saturn.

One needs the other, the Moon can provide creativity, but the planet Saturn must give some seriousness that is necessary for success, for some serious and dedicated work.

However, there cannot be any denial, and these are the people who need external help; otherwise, they will not be able to bloom.

It is like the planted seed, if it does not receive the necessary water or light, and the earth is too hard and dry for the seed to sprout.

In this case, the only thing that can help is the influence of others, that in the case of the work can be really positive and even inspiring – the best art, in this case, is produced by love inspiration for example.

They do not have to be artists, but they could draw their inspiration from their lovers.

Although symbolically different, Saturn is largely associated with the Moon in terms of developing a certain form of protection for human, that is, his emotional and mental development -if this relationship is not in the balance, then these people who have in their charts will suffer badly.

Unless there is a good correlation between the two planets, a person rejecting certain principles and systems (Saturn) takes himself into a state of spontaneous distress, lack of security and reasoning and a lot of restlessness (the Moon).

Whenever you see that this aspect is active, pay a lot of attention to your emotional state, are you happy or not, do you feel calm or restless. There is always a reason behind it.

In the life of the people who have such an aspect, they have a great deal of diligence in daily life, sobriety, good reasoning power and developing successful ideas – and in the split of a second, they come into something else.

The Moon connected with the planet Saturn helps these persons to build a solid and stable foundation in terms of achieving their own desires and ambitions.

The Moon rules the area of ​​home and family relations, while Saturn represents discipline – it is a good combination for all those who want to become dedicated parents.

The sextile of the Moon in the natal chart brings short-term impacts – and when on the other side you see the planet Saturn, then such a combination triggers the evocation of old memories of a former lover and the past.

The advice for all you is to look once behind your shoulder and resolve that one issue that you left in the past and you that you did not resolve. What is considered to be the most important in this transiting aspect is good organization and planning in order to produce as productive results as feasible.

Use this sextile smartly, and primarily try to resolve all past issues, and leave them there, do not take them into the present moment, cause it will mess up your mind.