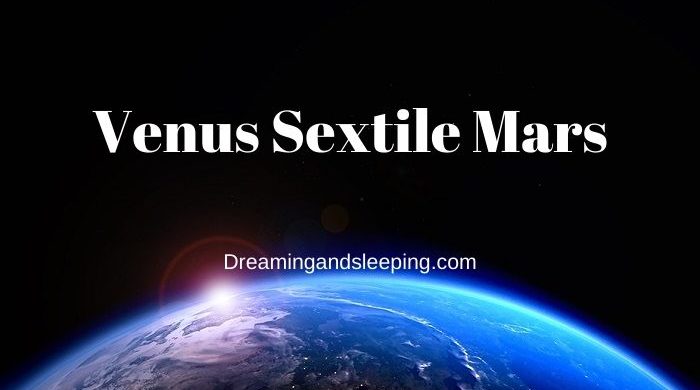 Venus and Mars are in the sextile position in the natal, and it comes to that place via transit, progression, and direction, then this is a convenient period for couples to bond in an emotional relationship, whether it is marriage or a free emotional relationship. Or people could do some good job, regarding their business through discussions of important common issues and plans.

In these moments, you will have a better than usual understanding with your partner in many areas of life, and you will need to support one another, plan for common goals and pursue common interests.

Here we meet one very interesting sextile, and the reason why it is very interesting lies in the fact that, by the judgment of many, Venus and Mars are the two planets that are totally different one from another.

They represent the two different principles in life, and to confirm this idea, and we will remind you of one saying that goes something like this – women are from Venus and men are from Mars.

The symbolism of Venus and Mars describes precisely gender characteristics in women and men.

Mars is the primary active polarity, symbolizing the driving force and energy and is penetrating. Venus symbolizes primarily passive polarity, our physical senses and their refinement and is receptive.

But, we have to point out that here, in the sextile (and we know that this is the positive aspect) these two planets should cooperate so they could bring the best possible results for the person who has them in the natal.

It is important to note and accept that Mars and Venus are the primary representatives of opposite polarities in nature, and that at the level of humanity they represent the symbolism of opposite sexes – man and woman.

Everything that is usually said in the realm of Astrology is connected on some level with this idea, and it is not far from the truth. Look at it as the two different types of energies that can work together very well, just like in this positive connection, like the sextile. 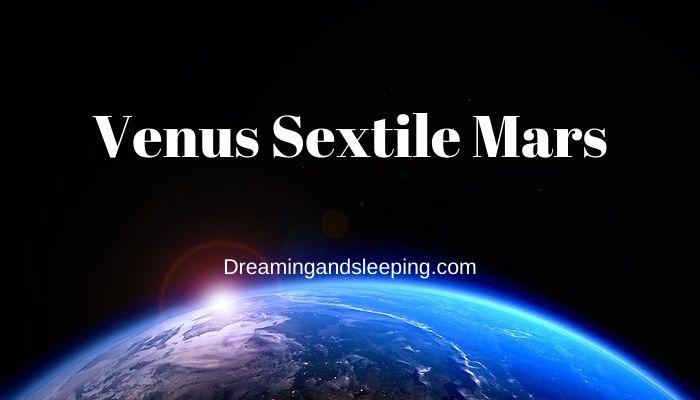 In this sextile, both energies are distributed so that Mars represents a male or active polarity and acts initially.

These people could seem like those that take the initiative and the leadership, which assigns them with the role of protector. And they gladly take this role, they love to be in this role, even if they have some problems in dealing with all obligations and stress that it carries, but they are heroes of some kind, even when they suffer in the privacy of their bedrooms when no one looks at them.

In love, and in all other relations that they are in, these people must learn to think, speak, and respond in an appropriate way; they need trust, acceptance and respect in their relationship with people, and this is not applied only on love connections.

In return, these people will provide his strength and skill here to do something that makes their loved ones feeling satisfied and honored.

On the other side of the sextile, we meet the planet Venus that is the representation of the feminine or passive polarity that accepts what is being provided.

So if you have from one side a person who provides, but on the other, this is the person that receives, creates life and nature.

Its primary role is to sustain the processes of development of life and life forms in nature, and we could say that this is the role that is much more dominant in some ways.

Of course, this sextile gives these people a certain attraction (they have a nice appearance and beauty, and are very sensual)

Mark David Chapman, Pamela Anderson, Ronald Reagan, Joe Pesci, Joanna Lumley, Gordon Ramsay, Omar Sharif, Harrison Ford and Robin Williams all have this position in their natal charts. Take a good look at their biographies and take a look at their lives – how much of this sextile position affects their lives.

So, if you want to speaks with the simple words, these are the people who can lead a diverse life, for example, have families and do a job that is out of the ordinary, and to shock public or to have an affair.

But, you should look at them from a perspective that their primary role in life is to provide and indulge, they have an inner need to prove that they are more than capable of supporting those who are close to them, like family or lovers in every way.

And here we come to the most amazing part of their personalities – they can do it from the two different angles.

For example, they can prove themselves through some works, through certain types of activities by which he would draw attention and suitability. In the end, this could be their ultimate goal, to take good care of their families – the feeling of comfort makes them feel big.

Maybe the best way we can describe the lives of those who have this sextile is that they want to maintain the balance in life and to have it all.

They want to provide and to be stable, but they also want to give a complete relationship that is not only at the level of emotion but creates the possibility of merging the two halves into one wholeness, which is actually the meaning of the emotional relationship, which reflects the Venus part of this story.

People who have this aspect in their natal horoscope are able to wisely choose the person with whom they enter an emotional relationship, have a good sense of their partner’s needs, and know how to set themselves so that they can resolve any problem they might have.

We must not forget the aspect of Mars, that drives these people to compelled to weigh in with competition in the form of a contest or fight – this is true for both males and females, and this particular comes to the surface if they have children (they are always looking what the other family is doing, etc., there are constant comparisons that do not bring any good to anyone).

Sometimes this competitive nature is more than anyone asked, and they can become so irritating that people gladly avoid them.

At times they can sell themselves for petty gifts and are not able to solve practical questions, especially regarding the functionality of a shared home, and to share their most intimate feelings.

They demand respect by all means, and they demand to be understood completely, or they will walk away from any connection in question.

In short, these people can be overwhelming, they can be intense, and not everyone, even their loved ones could turn their back on them, making them even in worse condition than ever before.

Some of them could develop some serious mental issues that come as a consequence of too much stress and suppression of problematic emotions.

But there is no doubt, these people, even if they are not blessed with the conventional beauty, they have an amazing magnetism and are adorned with the charisma.

In this sense, these people do not have to compete to do anything to make people fall in love with them, and they already feel its strength and abilities in their appearance.

If we want to look deeper into the sextile between Mars and Venus, we must say that this aspect is an indication of good sexual compatibility, passion and excitement.

They can learn from their lover’s new things and show a willingness to experiment temporarily.

Although the attraction is not so pronounced at the beginning of the relationship they start with someone, over time, this closeness and sexual chemistry become stronger, and they can start a family that will stand the test of time, for sure.

In some general way, this is the aspect that indicates an expanded requirement for unrestricted interpretation of emotion and tenderness in love, and only this is what will complete them in love. Also, this passage accommodates to make it easier to meet their expectations in love.

These people have a good understanding of the person with whom they are emotionally connected and are able to build mutual trust, most often through honest communication and agreement on all that is important for the proper functioning of their emotional bond or marriage.

At times they are the people who have such an active nature that they seem like they can rule the world, they are those who have amazing ideas and who approaches and initiates the formation of the business.

Many of them are driven by making a lot of money because they feel the need to support others that are close to them; they love to see themselves as the providers of the essential necessities of life.

But, one thing must be added here – their families must be ready in return to take of them to support them, and to put up with them in times when their usually private business does not go too well.

They can have ups and downs in their jobs, and they too need a lot of support.

They also have a good sense of nature and are able to cope with contact with living nature, and they adore when they can work in the wild and when they can do an activity outside, so the fact is that these people need a job that will help them be on the move.

Aspects between Venus and Mars represent a combination of opposites. When aspects are harmonious, then Venus and Mars complement each other, and when challenging, it often happens that they find themselves in conflict with each other.

In this case, when in sextile, Mars and Venus support each other and cooperate with each other.

The forces of nature can be represented by the symbolism of Mars and Venus. Mars represents the initial capsule that in Venus initiates the processes of support for nature that lead to the ultimate materialization.

You need to know that this aspect means, when people have it in their natal charts, that the time is right to take the initiative and enters into a bond of any kind that will suit them at a given moment.

These sextile initiates the processes of development of their common outcome.

The main thing is to be, in the next period, open up, begin to build communication with confidence and share what you feel, so sextile allows Venus and Mars to plan and organize their relationship, be on the move, active in their pursuit common goals because at this stage one can easily understand and find similarities with one another.

All of these aspects could be used for the improvement of your relationship.