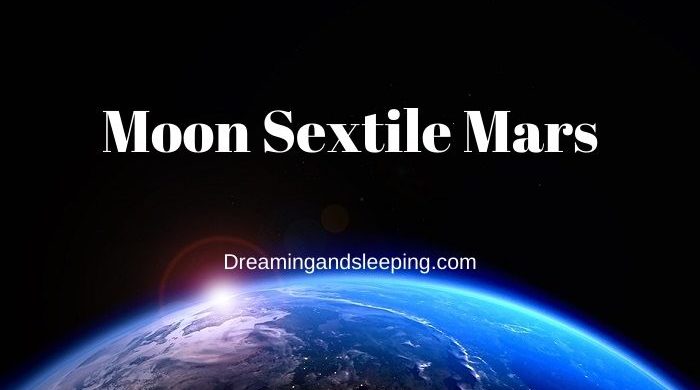 Sometimes these angles are accurate in degree, and sometimes there are small deviations, and those who are more experienced in astrology readings know how to calculate and “read” the natal chart, so these exceptions do not make a big difference. Astrologers tolerate variations.

Differently, the most common being 5 to 10 ° degrees. The closer the planets are (0-5 °), the more intense the aspect, this is clear even for beginners.

The effect of both planetoids increases, their powers unite, but depending on which planets perform it, it can be beneficial or harmful.

Here we encounter one very interesting sextile position since we know that the planet Mars is the planet that is connected to the action, and when it is in a good combination with the Moon (like in the case of sextile position), it gives the fighting spirit, a person who needs to compete but in a positive way.

In this example, you will be able to clearly see how important is to have this position, since it can reveal so much in the natal chart, and in this case, the Moon that is in charge for the emotional, and hidden part of our personality is connected to the active energy of the planet Mars.

Courage, passion, a far greater and better need for regeneration and struggle than when it comes from the Sun is the best way you can describe lives of the people who have a sextile position between Mars and Moon. Have this in mind when you are thinking of these people.

These are persons who enjoy working, fighting and this is more because they do not come (usually) from the stable state of happiness, but from some volatile background that is more determined and dominant toward them. 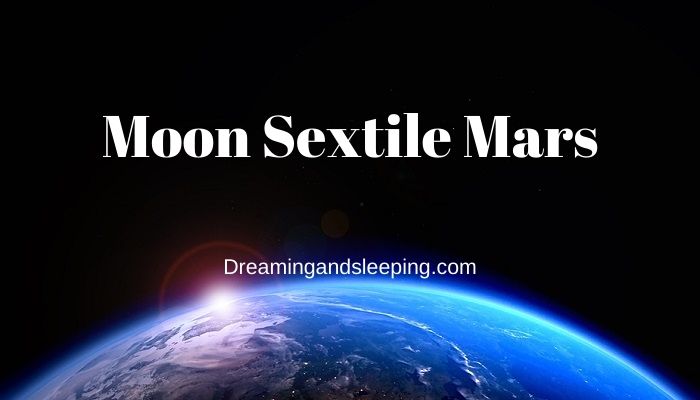 Always have in mind that the planet Mars is deeply unconscious, it operates from an unconscious level, an animal element in a man who has a door here through which he can enter and express feelings and a person feels that energy and passion.

Of course, this is the passion that can go both ways, and the good thing is that here Moon, as much as it gives a somewhat volatile nature, it also calms down this energy that is almost like a volcano eruption.

As you can see, there are numerous successful and over the top talented people in this group, but also those who have tragic fates.

Having said all of this, you could see for yourself that this aspect in the natal chart gives these people a great amount of courage, particularly for actions that they feel deep inside their minds and hearts are right.

They are attracted to all things where they have a set of rules, and there they want to be the best they can be; they are fast and hardworking, dynamic and passed the energy to their environment.

What is even more interesting is that they are able to direct positive actions to others, which in this aspect also gives them a certain level of confidence to deal with her problems faster and easier than others.

Even more, this is the aspect that can serve as the encouragement tool for a person who has it in its natal, to be able to make greater efforts and in terms of strengthening their internal motivational power to help them reach their desired goals.

Also, this aspect can often have the effect of magnifying self-control as well as making a better impression on others in the business environment.

But of course, this is just an option, and there is no assurance that they will make it.

Looking at things from a different perspective, people who have a sextile between the Moon and Mars means that they are those who have unrealistically great expectations, idealizations and illusions – in sometimes they cannot direct their energy realistically, but they are more wasteful than anything else.

It is truly important to know how to use energy, and these people learn it all of their lives.

To do so, and this is the hardest lesson they learn all of their lives, and some do not learn it even then, is the one where they daily sow their plans and desires, through the images in the head, or make a plan on paper.

It is good that there are an inspiration, optimism and positive ideas for this now, but in order for them to come true, it is necessary that they believe in these desires unconditionally.

All the time, without any exception because only then, they will be able to correct their flaws.

Moon and Mars in the sextile position, this is the combination that “smells” a lot of sexual energy, passions and love feelings that are abundant.

All of this is connected in their case, they are able to feel for another, and this is what is called a complete passion.

They will always approach the person who treats them favorably because that is what they are looking for; more it requires circulation of sexual energy than anything else.

These people have what is called fatal love stories, and there is nothing ordinary in their lives; the worst part is when they have doubts about what they should do now and which path to take, it can lead to loss and failure in love.

Therefore, it is advised for them to strengthen their faith, and take advantage of the positive influences of the Moon and Mars combined – it is the force that enables them to reach the goal through cooperation, diplomacy, alignment, and of course, through truth and justice.

All of these traits must be applied to life in two, with the person they choose to be their lover – a lot of compromises, and diplomacy in conversation, along with a lot of passion.

All in all, they are amazing lovers, care and “harsh” when necessary; they can be an entire package.

The Moon in sextile aspect with the planet Mars carries a personal enthusiasm and therefore increased energy, the possibility of playing sports, which will again depend on other aspects, the houses in which the planets are located and the strength of the aspect – whether it is applied.

Possibility of wearing a uniform or friendship with uniformed persons. This aspect generally carries health, value and speed if it is perfectly placed in signs, homes, and if it is applied.

Since the Moon can be seen as a changeable aspect in this sextile, but the Mars is the fiery sign that brings movement, activity, increased dynamics, travel, sports, and requires some focus, so it is a good idea to be one in the realization of their plans.

They must not waste their energy and should pursue their careers while they are young. Such aspect is especially good for changes related to new travels and knowledge, new horizons, and changes in the intellectual and spiritual plane, and those related to ethics, morality.

They can do whatever they want in life, and it is clear that they have talents and energy for everything they choose to do.

As you could see, there are numerous positive aspects of this sextile position – among all others, and we notice enthusiasm and optimism, as well as great attention for the purpose of achieving great goals.

These people work best when they are genuine – then such actions can lead them to the achievement of great goals and ideals. But the tendency towards megalomaniacal aspirations is common for them also, as well as their tendency to waste energy on some irrelevant things.

Advice for them is to wait the time that will bring more moderate aspirations, and those succeed in being dedicated to other persons, can relate to some common accomplishment, socializing, travelling together, or taking exams with the help of others.

They should try to pursue something that is realistic, stable and lasting, but also something different, and it is advised that it would be good to insist on doing something our own way patiently.

They should strive to the good exchange of energy, as this sextile could bring responsibility, wisdom and experience, which will come well to fulfill our aspirations, while the Moon brings serenity through relationships with others and cooperation, connecting with others.

But, they must be careful since all of their lives are connected to the unrealistic view of things or an aspiration to escape from reality.

If they overcome it, then it would be best through creativity, listening to music, creatively creating something, or editing a beautified reality, for example, by introducing a sense of fairytale and illusion in life.

The new Moon could be the time that is especially good to start with something new, as successful changes can occur (maybe there will be some sudden and rapid changes and unexpected opportunities). Accept them!

The sextile between Moon and Mars speaks of the beginnings of change, accompanied by a great sense of responsibility, seriousness, weight, worry and disposition.

But the sextile of the Moon and Jupiter will still be less felt, especially if we pass it along with others.

If you can try to get less tired and rest more, especially your eyes, and make plans for the next period, then from tomorrow, go boldly to the new day with faith that everything will be great.