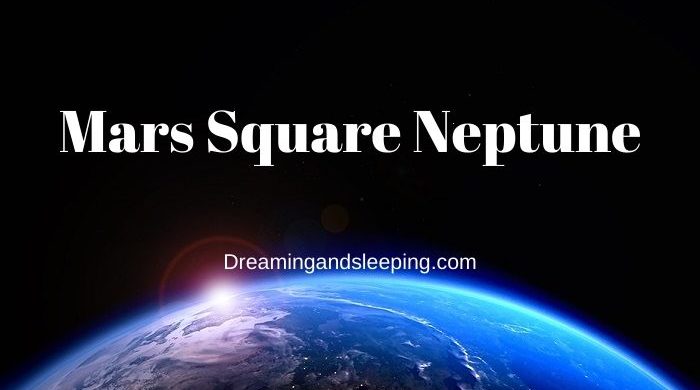 In any astrological analyze, it is ok to look at every aspect and every planet positively, even if that transit brings so many negative things.

Despite the challenges and the awkward moments, in each and every aspect you can find the positive part, but in the difficult ones that hardest part can pass and good can come out of all the pain.

This is true in all aspects, and since the square position is very hard by itself, you should be as positive as you can if you have it.

Mars is in a square position with the planet Neptune, and we already know that Mars represents our strength, mobility, engagement and action.

Neptune is a planet that loves to fantasize, dream and live some of its life only known to it.

The two of them know how to bring many beautiful things, and in the best-case scenario, these two will give a person a great startup imagination that can be used in life later on.

In the case of Mars and Neptune in a square position, they are at the intersection of energies, combativeness, speed and power of Mars and the dispersion, foggy and abstractness that comes from the Neptune.

Mars needs to reach its destination as quickly and as promptly as possible, moving and breaking through all the obstacles it encounters.

Neptune moves radically, spreading in several directions like fog or haze and in its path has the ability to roll wherever possible. 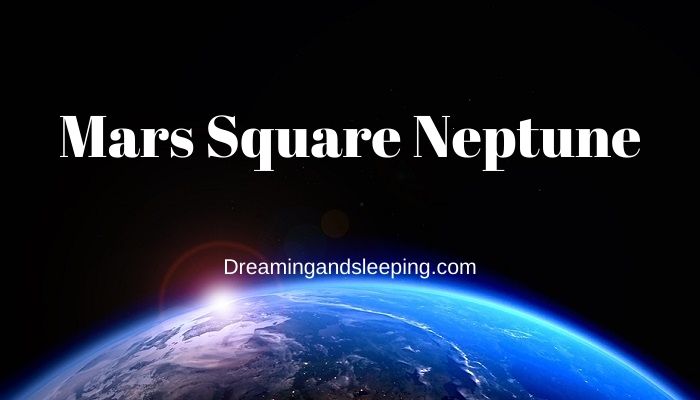 In a general way, when Mars and Neptune are found in not so fortunate combination, it often happens that people who have this aspect are prone to fantasy, which is not a big problem if they stop there (they usually do not stop).

The problem arises when they start to idealize someone or something, and they are the ones that do not know how to stop it, and this is what is making the trouble

This is the most challenging aspect that two so different planets can make, and although they may know somewhere in the back of their mind that what they see is not a realistic image, the square is too strong, and they continue as the time goes.

Then they tend to go over anything and everything, because in every possible sentence or view they like, they seek confirmation of their fantasy.

But, we promised that we would be very positive, and in that sense, we will say that this does not mean all bad because sometimes the fantasy when it is properly guided can have benefits.

Some of the famous people with this natal position are Henry VIII of England, Andy Warhol, George Moscone, Ian Charleson, John Wayne Bobbitt and William McKinley.

This aspect has its good points, and it allows people who have this position in their natal charts to plunge into the depths of their own psyche and see actually how strong it is, because who gets out of this aspect becomes even stronger than he was, and this is true for the people with this aspect.

They are the ones that are constantly struggling with their inner being, and the good thing is that they will always find that good that they will get hold of because the imagination from such events infuses their energy of idealization.

The good side of the square is that it enhances our willingness and ability to defend ourselves against danger and also encourages the development of our consciousness by which we can overcome our animal nature.

It is the nature that scares us, but we are able to overcome it.

It is not at all easy to get out of that surge of mist that comes with this square position.

Sometimes it may take many times for them to be seriously disappointed and suffering to see where the problem is finally, so in some way they are prolonging the pain and suffering.

In fact, they should recognize the problem in time and cut it to the root before its very conception.

The only way to do this is to be aware of them and to be the most important to them. That way, they will be able to can hear and see a thousand melodic calls hand you won’t answer any.

In Synastry, this is the aspect that is very interesting, and first and foremost, in no relationship should the words of the lover hurt so much, or get tired of talking to that person or possibly have the need to remain silent in order to maintain contact (and this is what is going on if this square position is found in the Synastry). It doesn’t matter if it’s a relationship with a friend or a partner.

It also can indicate that lovers do not feel defeated or broken, even when the love connection is not good, and it does not work well. It is an instant alarm that something is wrong in the relationship and that it needs to be terminated.

When it comes to these people, one thing is clear, and their love connections should always be very supportive because, in times when their lover criticizes them, they should feel that criticism as his or her desire to be better, not as an insult. In this way, people are able to create healthy relationships and do not allow Mars and Neptune square to push into slippery terrain.

The best advice for all of us, if we ever find ourselves in such position, in Synastry, is always to follow our own sensations and inner feelings, and sometimes the ratio is not needed.

Don’t go down and change for the sake of another person to keep in touch. It is one thing to be sensible and think about what the other party is saying and see if it is right and something else to go against yourself for the sake of maintaining relationships.

The aspect of the square between Mars and Neptune in astrological symbolism is a challenge for planets that find themselves in this relationship to treat one another carefully and in a way that varies to some extent from their primary nature.

The aspect of the square symbolizes the entrance of fast-moving energy from both of these planets, and it is just like an intersection where two vehicles going in different directions and at high speed meet at the same intersection where their roads intersect.

This is a dangerous situation where two vehicles can easily collide, but sometimes from that blow, there can be so much crash energy that it can produce something good.

When you go beyond this lower level of the square, you climb to a higher one where your imagination is doing everything and helping you creatively. Dream, but don’t dream. Imagine but do not idealize. Love it, but don’t obey by all costs – if they are able to find a balance they are able to do everything they want with their talent.

We call this aspect challenging because it, on the one hand, provokes a person to take action, an instant one – and as you know this could be a good thing, mostly in a business world.

What we most often miss out on in the square aspect is to act thoughtfully, and in this sense, it is a good idea that people of this aspect work something creative, like art.

When they have a hit of creativity, they should see it as a warning signal and do not have time to think, but react instinctively – or counteract what we are seemingly endangering or fleeing.

This is why the aspect of the square in practice in us provokes a reaction of anger or fear and leads us to react abruptly and instinctively, and this is the reason why we would not recommend these people to have any risky job, where someone will depend on them.

Most people feel an aversion to the nature of this square aspect because we know from everyday life that the very squares in our natal horoscope have strangled us and still cause quite a bit of difficulty in the areas they cover.

But, right away we assure you that every square is good because it leads us to action in the sense of overcoming and changing the unwanted state, and the same case is with this formatted between Mars and Neptune.

This is the time when all of us should be able to grasp immediately and evaluate the situation we are in. The more aware we are, the more alert our consciousness is, the faster we think and the easier we can find the best ways to resolve the situation.

In this way, we will at least be able to mitigate the potential casualty if we were able at the moment to assess that we could not avoid it.

If we react unconsciously and instinctively, the chances are greater that the consequences will be more severe, because in that case we are overcome by fear and do not clearly see the situation in which we find ourselves.

The part that is worrying in this square position is the one where we suddenly find ourselves in a thick fog where our visibility is quite limited.

This immediately puts us in a dangerous situation where we are confused and disoriented, and this is the scary part of this square position, and it can even happen that our senses are numb and weak.

Illusions that come from the planet Neptune does not allow us to see clearly, we cannot clearly assess the direction from which we hear certain sounds other than the immediate ones, and even when touched everything becomes a danger.

If we are in a hurry and hectic, it can easily happen that we run into the fog of something we do not see, encounter slippery pavement, stray, and never to find our true path.

What most often causes this kind of situation in us is nervousness and emotional anxiety. We want to regain our orientation as soon as possible and calm down, but the fog is getting thicker, and there is no way out of it.

The square of Mars and Neptune just causes excessive emotional anxiety, almost unbearable, followed by disorientation and a lowered threshold of waking consciousness, and the average person reaches for something that will reduce the panic he is feeling.

And since each square asks the two planets to mix their meanings, in the case of a square holding two completely different elements in the same container, this leads either to the neutralization of the resources of those components or to a destructive reaction.

So, in the end, one can help the other to give the best out and to suppress the negative one.