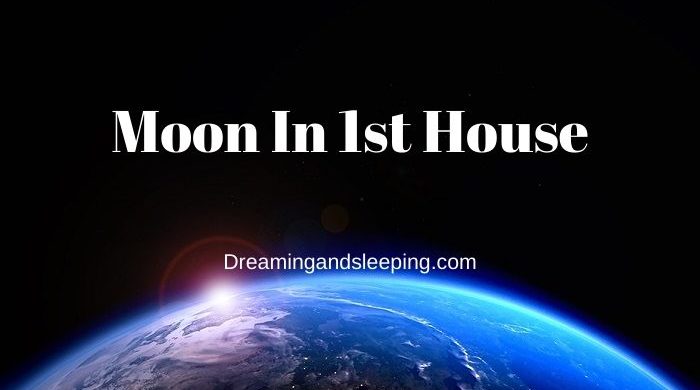 The planets Chiron, Uranus, Neptune and Pluto run so slowly through the zodiac that they only represent generation aspects and can only be interpreted on the personal level practically only in the house.

The positions of the sun, moon, mercury, Venus and mars have a relative meaning with regard to their sign position and are therefore considered to be so-called “personal stars”.

Nevertheless, the interpretation in the house is also a priority for them.

If there is a star near the next house, this can be interpreted in both houses. As a rule, one sixth of the house size can be assumed in arc minutes.

If a star is in the immediate vicinity (a twelfth of the house size or closer) in front of the next house, then this must be interpreted completely in the next house, this applies especially to the main axes 1st, 4th, 7th and 10th house, that is AC, IC, DC and MC. This effect is called “moving in” or “conjunction with the top of the house”.

People with the moon in the 1st house are strongly guided by their feelings. They are particularly emotional personalities who not only express their own feelings but also receive the emotions and needs of others. They benefit from their outstanding intuition, which even borders on media skills.

Her personality was shaped above all by early childhood experiences. They are particularly tied to their mother or appear to be a motherly type who likes to take care of others. Challenging aspects of the moon can be difficult to bond with the mother.

You are usually very loving and try to get personal recognition through an appropriate demeanor. You need and want contacts to be able to reflect. Your own emotional power and feelings are intense, as is your sensitivity to the feelings and expectations of your fellow human beings. 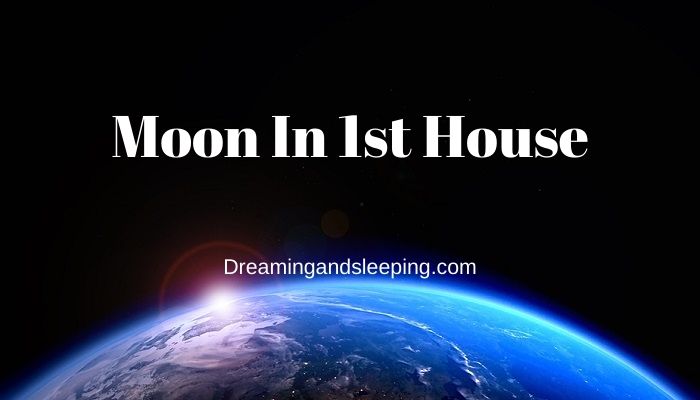 Moon in the 1st house is an indication of a particular sensitivity to the behavior of others, so you tend to react rather than act.

Perhaps you tend to overreact due to your sensitivity. Many people with the moon in the first house were strongly influenced by their mother. Sometimes this means a problematic mother stamp.

So you could not have the experience of growing up in a protective environment (screaming children).

This could lead to fear of loss, which can be a reason why you tend to adapt too much and sometimes find it difficult to stand by yourself. Of course, your mother stamping didn’t have to be negative. The above example is valid when difficult aspects fall on the moon.

But either way, you absolutely want to look likeable, which can give you a restless, unbalanced trait. Maybe you want to find everything in yourself, sometimes you are happy and friendly – sometimes dark and peculiar.

You are impressive and it is not easy for you to maintain a reasonable distance from the environment. This can also mean that you quickly make contacts that become so close in a very short time that your counterpart might feel overwhelmed by it.

From a psychological point of view, the inner restlessness can be compensatory in showing an exaggerated independence. Work and performance then become your replacement for emotional warmth.

The strength of this position is that over-zeal or hypersensitivity can be reduced and thereby more emotional balance is achieved. Then the initiative comes back and it is easier for you to stand by yourself, even if you no longer hide or exaggerate your sensitivity.

So people with a moon in the first house are loving beings that should be met with tact. Women usually have a very feminine look.

Men look less male, which of course doesn’t make them less interesting. Fine men in particular are often preferred. But since they are anything but rip-off types, they are unfortunately all too easily overlooked by the seekers.

People with the moon in the 1st house are very sensitive and have fine sensors to capture the moods in their surroundings. They are considered to be very caring and helpful, which can rarely deny others’ wishes.

It is extremely difficult for you to say “no” in order not to look into disappointed faces. This is how they put themselves in trouble when they are under the pressure of expectations from the outside world, but cannot identify with it spiritually.

Challenges of Moon in 1st House

On this occasion, of course, they don’t skip dessert, because one of their biggest hobbies is eating good food, which is often made noticeable by a few kilos too much.

Most of them also have a matching rounded face. Such people are very restless and try to gain recognition from the outside, especially in difficult family relationships. You need emotional balance so that you can stand by yourself.

Therefore, they do everything to make a good impression on new acquaintances. However, they tend to make them happy. In contrast, due to their impressive nature, they can often be influenced and exploited by others.

On the other hand, you exude a lot of good mood when you can identify 100 percent with your tasks. Most of the time, they rely entirely on their gut feeling. This sometimes leads to very irrational decisions.

Many people with the Moon in the first house, while caring for their exterior, strive to nurture their “inner beauty” at the same time by developing virtues, cognitive abilities and emotional intelligence. They want to be fully accomplished, confident and strong in every segment of their lives.

In order to achieve greater personal fulfillment in adulthood, proper emotional maturation and emotional balance in childhood can also play an important role.

If certain “jerks” occurred more frequently in childhood, it is possible that later in life, this manifests itself in various ways through different forms of egoistic behavior towards others and through a lack of empathy.

In the field of love, there is also a desire to make the best impression with a view to realizing love wishes. In love, the subconscious need to acquire a dignified and strong personality with solid character traits can be emphasized, which can provide security, support and be a solid support in life.

Also, in order to achieve harmony in a loving relationship, a mutual protective attitude is required. As far as the family is concerned, on the family plane, this individual shows a great deal of interest in the household, likes to consider himself the pillar of the house, striving to put his needs and interests first and to impose his authority.

The lunar position in the first house, which is a fiery and angular (angular) house, in many situations, also emphasizes violent emotional reactions and fiery temperament, which often causes a person to be easily aroused and to plan in an instant, to be very passionate and fighting for it.

Sometimes he can be very impatient, stubborn, fierce and timid. He also often expresses the need to be first in everything.

The moon in the first house often indicates a marked desire for openness and a direct approach to behavior and communication in interpersonal relationships in their environment. This is a personality who usually does not have the need to hide his emotions and his mood.

Most often, she is not afraid to let everyone know clearly and in a straightforward way exactly how she feels, and in this respect she is very honest, expressive and temperamental. Such openness symbolizes a gallery of feelings that can be made available to anyone.

The attainment of spiritual bliss can to a great extent depend on the presence of a sense of satisfaction with one’s outward appearance, as well as on the ability to leave the desired (positive) impression on others from one’s environment.

If there is a more frequent feeling of greater dissatisfaction with one’s appearance and / or if the inability to make the desired positive impression on other people from the environment is more often present, in such situations the melancholy and pessimistic mood is often triggered, which can often be very obvious to others.

In many situations, the need to appeal to others in order to give the best possible impression on their environment can be emphasized, and for that purpose a great deal of effort, time and energy is invested in improving their appearance.

Guided by this, during her life she may repeatedly wish to make some radical changes in her appearance in order to refresh, rejuvenate and beautify.

Often, from childhood, he expresses his leadership and competitive spirit, trying to constantly push his limits in order to realize the desire to prove his abilities, skills and talents. At times, it can seem like she is competing with herself. In many situations, even harder competition can be seen.

He has the predispositions to achieve greater life success in many fields of life due to the strength of his will and stressed persistence, energy, enterprisingness and due to the always present high readiness for action.

Throughout life, she often struggles with herself, learning from her own mistakes, striving to preserve her dignity and integrity, as well as to build her solid independence and independence.

People who have their Moon in the first house have a peculiar personality. It is good to know what you can expect from this person and how you can interact with them in the best way possible.

Their characters can be difficult at times, but at least you know what you can expect from them at all times.

Their honesty and straight forward personality is going to be a refreshment in your life, and if you are born with this position, then you were able to know yourself more.