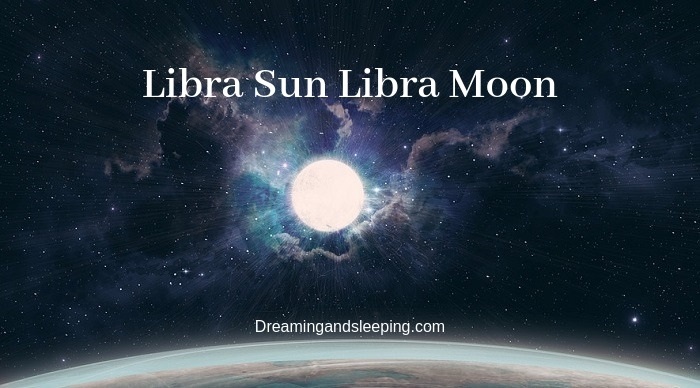 If we are familiar to the position of the Sun in the personal horoscope is not hard at all since we all know that it lingers in each of the zodiac signs for a month’s time in its yearly transit as seen from the Earth. This is one of the most significant aspects of a personal horoscope, and it is the representation of our character.

But when it comes to the Moon, it is not so easy to determine the relative position of this luminary (and the same case is with the other planets within the zodiac system). You should not be concern about this, and today many programs are free and online that can calculate the position of the Moon ion your chart (the problematic comes from the fact that the orbit of the planets are irregular and contrast considerably in pace).

If you have calculated that the Sun and Moon are positioned in the Libra sign, then this article is for you. Read all about this topic and make your conclusion.

There is a general feeling or impression that this person must be directed toward the realisation of his projects because only it can lead to a triumph over the indecision that is so prominent here.

This is also the person who is inherent in this simultaneously spontaneous nature, turned to others, thoughtful and concentrated, and he is always seeking the ideal solution for all problems that are in his and others life. This attitude is the thing in his character that gives him balance, and when he is in harmony, he can be happy.

Another thing that we must say is that in the person who has Sun and Moon located in the same sign, and in this case Libra, both sides of personality are equally pronounced – reason and emotions, both principles are mixed up and cannot be without one another.

Additionally, we must say that in the case of this person every quality is doubled and enlarged here – he is often a person who lives exclusively from the refinements, of all those small things in life that mostly outweigh the viewers of other self-aware values.

This is the person who is guided by his feelings, and his behavior just follows this guidance – he always tries to balance things mentally and emotionally though he is ambitious, but not ready to “cross over the dead” to achieve his goals.

When we are talking about the flaws that are connected to the person who has luminaries in Libra sign, we must say that in everything he does and thinks off, he sees both – what is positive and what is negative, so it’s difficult for him to take a position. He is the one that constantly measures “for” and “against”, effectively and loyally; therefore he acts indecisively.

Even worse, this is the person who can make so many wrong choices and worry later about it; and also he is the one that will miss out on many opportunities just because he cannot make a right choice.

And instead of finding a way to make that choice, and straightening his position in this sense, he opts for this – finding people who will make these “terrible” choices for him. And he does not have a problem in finding people, who will help him in this sense, and he has a double dose of charm that he has; he is the one that will easily attract someone who will decide for him.

When it comes to love, first we must say that this is the person who is under the rule of the Venus (it is the planet that is in charge of Libra) and this means that love and beauty are really important for him.

He is a tactful and peaceful lover who has a peace of mind, a sense of justice and the development of relationships with other people – this is the area where the one that has Sun and Moon located in the Libra sign.

Also, when he wants something in life, and to really get something done, something big, he needs a partner. And a love partner could be the one that will follow him around and will be an excellent analyst when the time for decisions comes.

You must know that the person who has luminaries in Libra sign does everything with the sense of highly developed aesthetic, and this often becomes the rule for his life: in the sense of feeling, work and home, but primarily when it comes to his love life.

As we spoke so many times, his lovers must meet certain conditions, both in their appearance and their personal beliefs, and everything in between.

Occasionally this is the person who sometimes can seem for others as a snob who will never be with someone who is beneath him or to compromise himself in some sort of dubious relationships, before considering everything that is not elegant and that his obsession is not in composition with harmony.

But this may be the only problem that this person might have in love relationship, not counting their indecisiveness that may ruin his love life. If he manages to find someone who will be a perfect lover and in his level, then things are great, and everything works perfectly.

So, we can say for sure that this person is the one that is passionate in love and in his life there is a clear necessity of effective life and sentimentality, as well as the need for independence.

Thus, it is possible to give a simple definition of this nature as “different” in its spontaneous acceptance of certain phenomena in life, nature and these persons themselves, recognising those values, above all aesthetic values, which are rarely observed by more realistic persons.

One cannot go without the other, he needs to be independent in love, but at the same time he must have proper support in his lover, and only a strong person can deal with such issues.

The perfect match for the person who has Sun and Moon located in the Libra sign is one and only Aries lover. He is strong and dominant in every life situations and remains like that in a love game. He conquers with superior firepower, directly, without any disturbance and our candidate can deal well with such power.

Although he can be aggressive, energetic and tireless and he is the one that sends the sexual energy, who is imaginative and dynamic.

This connection can last since both lovers could get the excitement and pleasure they want, but also some pain.

This is the person who is cordial toward other people, even too much, and this obsession, after all, can be transformed into a perfectionist fanatism that is not always pleasant to others. This desperate need for an ideal balance often forces a person with the luminaries in Sun and Moon to seek interference in everything, revealing that little detail that marsh the whole.

The social side of this person, its need to like it that prices because of its quality pushes it too often under the influence of others, as it tends to adapt and be what others expect from it or what it wants to become.

In the end, a person who has Sun and Moon in Libra sign represents the factor of emotional and social unification, and he is able to block the opposition from a constant dialogue that makes him necessary to others.

He can sometimes be overly dependent on partners, but he is also the one that wants to achieve his independence.

Everything he does he enters with the strong passion and is inclined to motivate a loved one very much, but to “show her teeth” when he does not like something.

Since he has an imagination he can always be a good creator of a project, clothes, he can professionally get to a good position early in the morning and will always receive official acknowledgements because he knows that he is in the right place.

But there is no problem to work and to be completely dedicated to the family because this can especially bring his peace in her soul.

What must be avoided is the strong influence of others on his life and often the easy receiving of advice and suggestions.