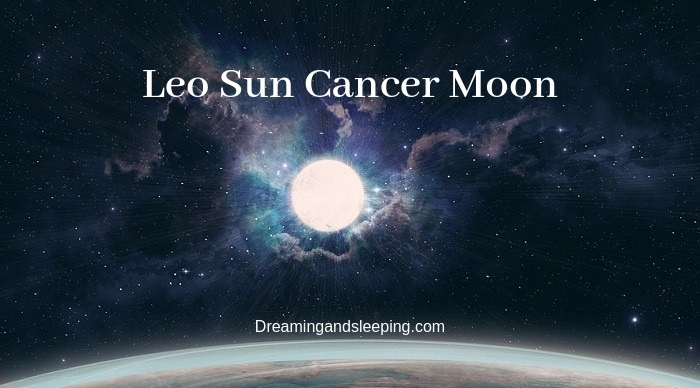 Did you know that the Luminaries appear as one aspect of the medicine and that they have some effects on human health since both Moon and Sun represent the connection between humanity and the Universe?

It does, and many people in the past centuries also noticed this -before it was the way how people explanate the occult causes and to explain invisible forces like solar and lunar emanations via mechanical, chemical, and mathematical systems.

Today we are sure that the Sun and Moon certainly have an impact on everything we do – and they have a significant place in Astrology.

Today we are looking into the life of the person who has Sun located in the Leo sign, and the Moon in the Cancer sign. What this means and how these two aspects are reflected in the character of the person in question and his personal growth?

Read all about this, and make your own judgment.

This is the person who has the authority of the personality, and it is always dedicated to the people and the care for others – the Moon in the Cancer sign always turning this person to others’ desires and needs.

Basically, this person is tormented by the need to be extrovert and its shyness; so in order to truly flourish, he needs love and encouragement. Fear of ridicule or criticism sometimes makes him discreet, diplomatic and conventional in interpersonal relations, but we could not say that this person is not sociable as other Leo people. And for that innate insecurity, he uses it to withdraw from all unpleasant things that may happen in his life.

However, this does not prevent such a person from showing true talent in gaining strong material security, which is either the aspiration that comes from the Cancer, who is a lover of comfort, or the impact that comes from the Sun in the Leo, who is in a social position sees a suitable means of showing his possibilities and gaining a reputable place in his life.

From a more negative side of the story, this is the person who has two opposing forces that are constantly struggling, which makes him at the time strong and safe in himself, at times dissatisfied and depressing.

He is incredibly strong, but at the same time, he is a very sensitive one. Thus, the contrast of the overwhelming power of the Sun in the Leo and the unyielding gaze of a battle characteristic of the Moon that is located in the Cancer, try to find some sort of harmony. This may be one of the most significant things this person must realise in his life so that he can be successful.

In certain times of his life, he may be in a search for the stage lights, strongly believes that he has the quality of a star, and optimism to match, but he does not feel it all inside, so he changes his moods often. He changes his course of action, and we are not saying that this is wrong; this may be the chance to find out what he likes to do.

This is the person who is gracious and charming in his behavior, but there are also inner struggles when he deals with the embarrassment he tends to get into his shell. He is a human being who has many fears, almost like all people who have the Moon positioned in the Cancer sign; but he sometimes deal with this issue in a mature way and other not, so his withdrawn can be more or less pronounced.

Because of the sensitivity he is often exposed to, he is influenced by the environment, but he likes people in his core and knows how to manage them well. He has the right attitude and the intuition to understand people deeply – he can understand what they are thinking and what their intentions are – but the problem arises when he decides to use such “information” for his own agenda.

Later on, he will regret his actions, but it will too late.

A life of this person is largely influenced by family and emotional life in general, and in an emotional sense, this is the quieter, shy and more sensitive than a typical Leo person. Love is always connected to the care about his home (whatever that may be for this human, just a partner, or an extended family) and family environment in which he will enjoy.

He has full of imagination and sometimes lives in one unreal world where he is the one that is adored and loved by many, but in fact, in reality, he is the one that slowly opens, and when things are not going in the direction that he desires, he pulls back in his shell.

Emotions are very strong in this person and are always present in whatever he does, and in the sense of romantic love, this is the person who enjoys romantic and unusual events and adventures. In him, deep inside, there is imagination, fantasy, certain creativity, and taste for nice things, and he usually finds lovers who will enjoy the same things that he loves also.

When in a relationship this is the person who demands a lot in love and is constantly nurturing certain principles, and at the centre of his relation it has to be him, so he needs a lover who will understand this and accept it as a given.

We will also say that this person with the luminaries that are positioned in the Leo and Cancer sign has a particularly strong and dramatic emotion, mood that often varies; the dignity that he tries to maintain all the time, regardless of his emotional status, but an eternal search is for the family and long-term relationship.

Since here we deal with the very ambitious person, his goals must be exalted, and the means by which they will be accomplished by the revelations – along with it, in an emotional sense he needs a lover who will accept this along with his pronounced sensitivity.

He likes spending, giving to his lovers, and he also likes to get this attention in return. He will seduce with the same energy and does not give up so easily when he wants to be with someone. He is often mentally convincing and dominant, and he is still trying to be just and discreet – who will fall on this his charm?

Our guess is that the best lover in his case is a Virgo lover -these two might have a good connection because both lovers, in this case, are aware that they need to work hard for love and happiness.

Both lovers may find the sanctuary in another lover and can work really well since they have similar goals in life.

In the end, both lovers are demanding, and they should provide more than they can objectively in this connection.

Like in every other relationship, the compromise is necessary here, and we go back here on the aspect of the harmony that we mentioned in the previous sections.

Here we encounter a person, who always likes to help, but the problems come from his emotions, and he also has sudden oscillations in mood changes – so he is not a friend that will suit for everyone.

With his close people, he is the one that must always understand deeply what the problem is; and when he cares he has a gentle attitude towards them. If he feels that his friends love him sincerely, he will give it back with “double love and attention,” and if they, by any chance humiliate him, underestimate or use him; he will remember it his whole life and will only be ironically and coldly distanced from his friends, so be careful.

After your first encounter with him, people are impressed by his deep feelings and fragile security. His imagination is rich, but what he wants is not always real. Avoid making your desires a reality; having an illusion of yourself and others is the main advice for this person.

This combination can be defined as day and night in the same person; he is under the impact that comes from the fiery Leo that encourages a generous blossoming of personality or from the other side dangerous inflation from the Moon that is positioned in the Cancer sign.

Emotional impulses in this connection in this person are dictated and dominated by the sensation of Moon that is located in the Cancer – as you were able to see in the previous sections.

Naturally, serious internal conflicts of these two forces can be difficult to control; yet the receptive nature of Cancer knows how to deal with such conflicts, and this is a good thing.

For its part, the fiery nature of this person encourages the proper recognition of one’s own powers; on the one hand, there is a desire for personal emphasis, and on the other, there is also a strong aspiration for isolation.

To sum up, this is the person who can be everything that he wants to be, and he is gifted for all types of businesses he usually works on. Conflict arises when a vulnerable personality line is created, which he would definitely want to conceal for pride.

In the end, he is an idealist who believes in certain virtues such as honesty and competence, and his pronounced negative trait is his poorly positioned and managed pride.