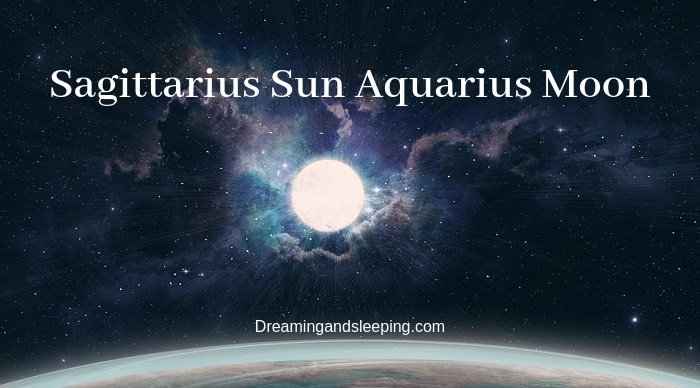 In old times creating the natal chart of an individual was a very long process, cause then there were no computers to help us out with the calculation.

Nowadays you can enjoy in your natal chart in a matter of seconds, but one thing must be clear from the start – interpreting and understanding your personal horoscope is something completely different, and it is a hard process to master since there are many aspects involved in this process that takes years to master.

One aspect that is very important here is the luminaries – the Sun and Moon, and today our attention is focused on the people who have this aspect located in Sagittarius and Aquarius sign.

This is the person who can be described by its generous freedom, and he could be seen as the optimist whom no temptation can interfere with. This could be seen the best in the seemingly hopeless situations when he draws his greatest energy as if the embodiment of pure power.

He is, without a doubt a human being who is capable of playing out the most sophisticated maneuvers, to resolve the most complicated conflicts.

Even better, if he wants to do, he will inspire others to have the will to live.

His actions are focused on the search the things to defend, and in a simple way, he succeeds in freeing himself of all the doubts that are the biggest obstacle to his growth.

In the end, this is one highly intelligent person who is very tolerant, flexible, and he keeps a lot of friendship, and the main motive in his life is the need to make a world a better place than it was before.

Of course, any person who would like to be the one that changes things in the world and who is followed must be ruthless at times, and he is the one that represents authority.

He is aware of the fact that he does not bring diplomacy, that he can often have a “danger” to lose his “place” or to have more serious problems with his superiors.

Even if this human being with the luminaries located in the Sagittarius and Aquarius signs is the most independent person of all, he still needs some kind of acceptance and support, and these two does not go well together.

The problem occurs in the situation where he is still relying on himself and that he does not have the necessary help from the closest ones when needed. Nevertheless, he does not possess bitterness, but a constant desire to change, he cuts what he does not like and goes just ahead.

Although he is not possessive, he can very well be provoked if he enters into a relationship (and we mean any relationship possible) where something is hiding from him or finds out that he has been lied to. Then he can show a line of ruthlessness, feeling that he wants to punish people in some way.

Fields in life, like his reputation, success, or expectations are very important for this human being, and this can also be the reason of his failures if he is in a constant need to have them in some way.

This is the person who is at all times very noticeable in public but also inclined always to get the truth when he needs it – people who try to hide something from him, do not go well, and he is the one that is ready to punish them if necessary. This is ok from one side but from the other the side we could also raise a question, who is he to pass the verdict on other people?

In the love life of this human being who has luminaries located in the Sagittarius and Aquarius signs has plenty of opportunities and ties before he binds himself to someone.

But the fact is that this human being strives for security and comfort, and will dedicate himself to a stronger and more responsive emotional choice.

It’s not unusual for him to experience dual situations in the field of emotions (to be with more than one companion at the same time), but the common thing is that all of his love connections start in unusual places and unexpectedly.

Also, one thing needs to be mastered here -this is the person who likes to travel, and he often finds love when he is on one of his travels, and in the choice of partners, he is very diverse.

People who want to be in a love relationship with the person who has Sun and Moon located in the Sagittarius and Aquarius sign has a strong personality that triggers a sensational impulse on others.

But there is one relevant thing to remember here -this is the person who is too busy to limit others to his own advantage. His personal freedom goes beyond freedom for all, in some kind of spiritual ascent of exaltation that destroys any judgments. Anyone could be his lover, and he does not have any restrictions.

In this sense, he feels, and this is the only condition that potential lovers must meet; but if they want to stay in his heart for a longer period of time, then they must be aware of one thing. They must not by any means try to destroy or jeopardise his freedom.

In love relations, this is the person who wants to have a universal harmony and give his contribution to improving understanding between people, and the first person who he wants to understand is his lover.

Sometimes he devotes his entire life, trying to spread love and help others to understand each other, and he believes that he should set the example in this sense and that he has to live that kind of love before he can help others.

Knowing that this person meets himself through others, and in relations with others, this is the person that must meet all of his conditions.

If he does not like it, trust us that he is able to conclude that affair without bitterness, so his lovers must be ready for a sharp end, but without any hard feelings.

Engrossed in his freedom and independence, he is no less engaged in the group for which he associates himself, so his lovers must be aware of the fact that he will never stop fighting fights that he believes in firmly.

The perfect lover for this luminary combination could be a person who is born in the Zodiac sign Gemini.

This love affair is considered particularly well because of the fact that such love couple develops a deep emotional connection based on a friendly basis so that this love relationship is considered a relationship full of trust, mutual understanding and warmth.

They can last really long, and will never jeopardise each other’s ambition and the need to be free.

Here’s a good friend primarily to himself, he knows how to please himself, but also to other people.

This is the person who always has “something to do” in order to improve human destiny or solve an unsolvable problem that some of his friends might have at the moment.

He is the one that is inspired by the indefatigable hope and great faith in man (if you are his friend, be sure that he will do anything that he can to make you feel that you are worthy and a person who can do something special in his life).

Also, the person who has Sun and Moon located in the Sagittarius and Aquarius sign is endowed with the exceptional originality of his worldview, and he has some kind of drive for progress, which he is among reformers and innovators. His inexhaustible power directs him to always seek the reasons for the events and behavior of people in his vicinity.

So it manages to be in line with everyone around him, and even if he may be too moody for some, or at times irresponsible when some important things are in question (like some arrangements with his friends), all of that is forgiven.

The person with this luminary combination is the one that has the tendency is to reassess himself, and he tries to be objective when it comes to others and can be a great mediator or advisor.

Many of his actions are directed to the social progress, and the main thing to remember is that this human being always lives “without reserve” and strives to give him every new day “a new chance”. Surely he is a great individual, but a pioneer and innovator, a researcher of the things that will shape the world in the form that he sees that is the best.

Often, the important situation comes to him just by reflecting the positive energy into the Universe, and that energy often returns to him as a bit of pure luck.

He is the one that loves to set an example and to show others that positive affirmations always work.

In the end, this is the person who wants to understand others and tries to alleviate conflicts of everyday life.

Even if his ideas may seem unrealistic in this materialistic world, but he is not the one that will back down easily, he is defending his interests no matter what.

And when times are really bad, then he just fills himself with more energy than ever before and sends a good vibration in the Universe.