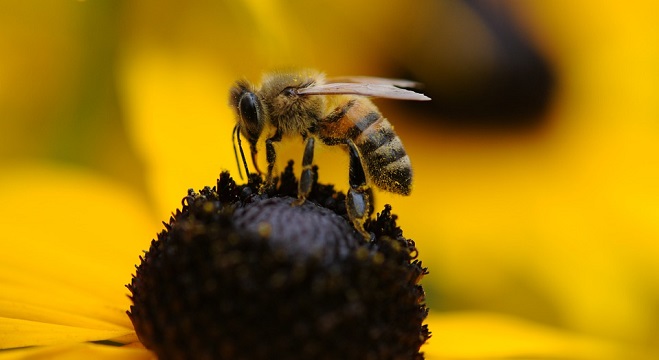 Bee symbolism is present for centuries. Bees were often used in folklore, art, poems and religion as divine messengers. Even today, bees have an important role not only in symbolism, but also in our eco system.

Now that we know more about bees we can respect them for the contribution they gift us. Without bees, our nature wouldn’t survive, therefore we owe them enormous amount of respect.

Bee symbolism in religion and culture

Ancient cultures were mesmerized by them more than they were by mammals.

Bees were primarily respect for their ability to produce honey. Our ancestors valued their help greatly, therefore they often made them into divine creatures and deities.

Early evidence show that bees were firstly symbols of maternity and femininity.

Many ancient artifacts are proof of the enormous respect bees had in ancient times. Ceramic bowls were often painted with bee symbols. In Ancient Greece and Rome, bee was linked to Aphrodite, Rea, Artemide and many other deities.

As a royal symbol, bees were first time presented in Ancient Egypt. They linked bees to thunder and believed that bees were created from tears of the God Ra. Bees were seen as symbols of fighting spirit because of their ability to sting.

In Islam, bees are considered to be divine messengers and very inspiring insects. It was a symbol of poetry, intelligence and philosophy. In Christianity, bees symbolize Jesus Christ whose body was invisible three days before resurrection.

To Bernard Clarivauxa, bees were symbols of the Holy Spirit. They were often linked to Virgin Mary and considered to be symbols of femininity and motherhood.

Besides being an important symbol in culture and religion, our lives pretty much depend on bees.

They upkeep the life on Earth and allow us to have food and life on our beautiful planet.

Planet Earth needs bees, therefore we need to show them respect not only through symbolism.

Their help is essential and life on earth wouldn’t exist without them.

Special content inside bee glands causes a chemical reaction in our bodies that can cause death.

Bee stings helped people to get to know bee’s character better therefore it was often linked to flightiness.

Getting Stung by a Bee – Good or Bad?

Considering the symbolism of a bee, we can only assume that bee stings are considered as a positive symbol.

In our dreams, bee stings represents overcoming hurtful events from your past that made you feel disappointed or betrayed.

Dreams about bee stings can remind us about the pain we felt when this unfortunate event happened.

It can also represent your desire to overcome this feeling of betrayal and hurt. Perhaps this was something hard to accept and you are still dealing with it in your subconscious mind.

Dreams about bees in general are positive and you can expect a lot of good luck and prosperity. In symbolism, bees are considered symbols of love, prosperity, wealth and progress. They are also symbols of hard-work and dedication to a goal.

Getting stung by a bee was considered curing, in some cultures of the world. Bees were seen as our protectors and their magical powers could get transformed to us, if we get stung by a bee in our real life. Many ancient cultures used bee’s venom to cure diseases and fight illnesses.

Since we know more about bees today, we are aware of the fact that many people are allergic to bees. They can cause death, so getting stung by a bee is not a very positive thing for all of us. Bee’s venom was often used in potions and cures made by shamans and ancient doctors.

Today we use bee products to cure many different illnesses or at least to help us cope with them better.

Bee stings are overall positive signs and we shouldn’t be afraid of bad luck if we get stung by them. Bees are symbols of hard-work, dedication and progress, so you can expect a lot of new opportunities to appear in your life.

Ancient cultures believed that getting stung by a bee will bring you a lot of good luck and happiness.

Others, believed that getting stung by a bee is not such a good thing and that you are getting punished for your actions. The divine forces might be telling you to get back on the right path and stop whatever you are doing.

Bees will forever remain symbols of hard-work, partnership and community. It is interesting to see how different cultures had the same overview on bees and how they all considered them as positive signs.

Bee symbolism has its roots in ancient history, therefore it will forever remain engraved in many cultures around the world.

Getting stung by a bee is usually a positive symbol, unless, of course, you are allergic to bees.

In that case, no matter how positive the bee sting is, you won’t feel like luck is now on your side.