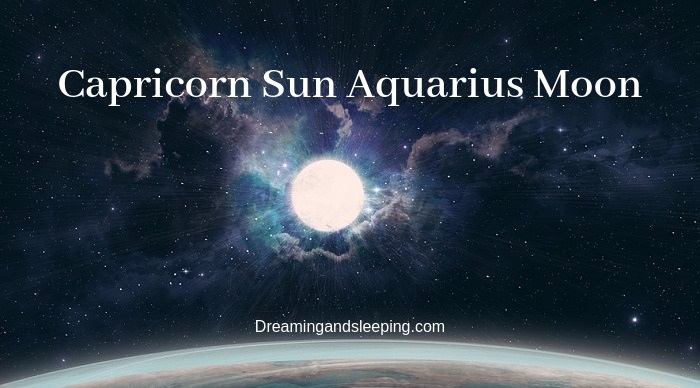 The planets that are relevant aspects of the horoscope show the active models or forms of temperament, forms that have their own place in the natal chart of one person.

But, even if we call them planets, they are not just planets, in all of that, we can see the aspect of the Sun and Moon or the luminaries (and by some definition, one is the star, and the other is satellite).

All of them are called the planets since all of them play a major role in personal horoscope.

So, the luminaries have their place in a personal horoscope, and some would say the greatest place belongs to them – and today we are talking about the person who has Sun located in the Capricorn sign and the Moon in Aquarius sign. Is this combination strange or is it well developed and creates an amazing personality?

In this person, the reasonable spirit is connected to the spirit of delicacy, and this is the person who is able to concentrate without opening too much.

He is seen as a person who is both cold and enthusiastic at the same time, but the fact is that he has the nature that achieves phenomenal lucidity and a certain ability of reasoning.

He could be very advanced in his thinking, and good concentration is what directs him one step further; but around him, there is always something that is mysterious and unique – he likes unusual and distant ideas — a persistent seeker who has a passion for knowledge and ambition to discover the unknown.

Often, forgets about having to live a private life and he may so many problems in his love life, but all that time he is capable of powerful passions that no one even assumes exist.

But there is one interesting aspect that we should consider here- the one that has Sun and Moon located in Capricorn and Aquarius connection is the person who is liberated, slowly but inevitably, he fitting his principles and fixed ideas, in order to face reality, with always positive help from enthusiasm.

He is blessed with the increased awareness of the value of less compulsory aspects of life -he is ambitious and can achieve so much in life, and because of his enthusiasm, his goals are almost unreachable for others.

Among the most characteristic features of this combination is the unshakable defense of the universal ideal: independence -for some this means that this human being is a loner (it is true also) and he is the one that needs to have independence in almost everything that he does.

Every aspect of his life is in some way connected to the solitude, and he achieves greatness in this way.

However, all of this can have problematic effects on his character, cause he is not ready to achieve this all the time -he cannot always understand what his life should be about, and this feeling often comes at the moment when he strives to have safety, and his ideas move him far from it.

He is the one whose strength of senses transcends the ability to decipher him – he often feels that things happen to him which he cannot reach, hiding in himself a feeling of less value and even fear.

Sometimes he is too slow to realise what is going around, and he feels that the world is going too fast, but the good news is that this can be just a phase in his life, that will go away after a while.

Another problem that can arise in the life of the people who have such luminary combination is the fact that he can be too independent, and a loner that is sufficient to himself, but the fact is that he sometimes needs a company that will make him feel safe.

There is no doubt that this person has emotions, and wants to be loved, but he is not like other people who show this tendency clearly and openly – even more this is the person who sometimes clearly point out that he does not need anyone, that is enough for himself.

So emotions often come and go, and he suffers particularly if the strong blows hi him afterwards. But there is always a time to enjoy the experience in the second half of his life when he realises that emotions are great things and that having love in life cannot be measured to anything else.

Sometimes a person who has Sun and Moon located in Capricorn and Aquarius sign can find a true love far from his home, in a sense that he can find it in a place where security is somewhere far away, but it is also the place where he can find that safety (in the unexpected place).

In the end, as far as love comes, in this human being there is an eternal quest, but subconscious there is a fear of rejection, solitude, or even ageing. However, this is the person who is a great fighter who basically never surrenders however much he needs time to find a solution in isolation, and even himself.

There is no doubt that this person is very unconventional and open to new things, prone to experimentation and in times when he decides to come out from his comfort zone where he is alone, he can have an intense love life – that’s what makes him different from the typical representatives of sign Capricorn (the Moon in the Aquarius makes much difference).

He may be attracted, and in a relationship with partners who are strange to others, and in this sense, he is not judgmental, it is only important that he is in love with his partner, nothing else.

But there is one more relevant thing, that we will add here -a person with such luminary combination is not the one that will fight for love; he is the one that will let others decide will they be in love with him or not.

He creates a feeling -if you like it, it is ok, if not, you are free to go, and everything is based on goodwill.

In the end, he is the person who just enjoys being different, even pride himself with individualism, and would love a partner who will understand that.

He does not care and will never be in love with partners who are boring and overly dominant partners / where he will have constant stress, the ideal person of this combination should be a cheerful, talented, funny person with whom he is never boring, a person with many friends and possessing hedonism. Someone who will not be his perfect copy, but someone who will complement his complex nature – seemingly cold person but with the definite ability to love.

The perfect match could be found in the representative of the person who is born in the Zodiac sign Gemini – even if this may sound like a problematic connection, we assure you that this could work, or even better it could last.

This love affair is considered particularly good because of the fact that such couples develop a deep emotional connection based on a friendly basis so that this love relationship is considered a relationship full of trust, mutual understanding and warmth.

Where our candidate breaks or he is too slow, there is a Gemini Lover to come and help him with anything he needs. And vice versa maybe the Sun in Capricorn sign will give the Gemini lover the necessary strength and stability.

This is the person who belongs to those who live wondering, optimistic friends, and he is the humanitarian who always have the “best solution and advice” for others.

Often, he is known to have many friends all over the world and has a number of unusual situations through socialising or travelling. Of course in those relations, others are those talks and open, not him, but he comes as amazing support his friends.

Education gives him a strong line of security because they do not want to depend on a partner or anyone else in his life, he must have that security by himself, and nothing else interests him.

Reputations, compliments especially in relation to others are for him what drive him very hard to be the best as he can be – so regardless of his solitude and independence; he still needs support that will come from his closest, like for example his friends.

At times, he is seen as an eccentric who does not care what others think – he goes to his own goals in his own way. Even more, this person is often rebellious – but always with “cause.”

This is a predominantly good combination of the luminary positions, in which the contradictory characteristics of both characters harmonically fit – these two oppositional forces are combined in a way that they develop one amazing personality.

The intellectual possibilities and originality of the Moon in Aquarius here are combined with the great diligence and perseverance of the Sun in the Capricorn.

This is a person who tries to be faithful to his ideas and tries to never fall into the “dark” matter where he can become a victim of conscious and strangeness.

He tries to raise his nature in the state where he will realise the importance of welfare, excluding the possibility that it becomes the object of drowning spiritual virtues.