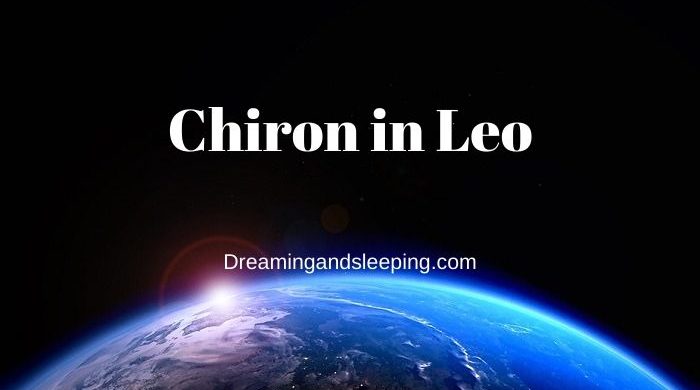 The place where the most vulnerable are those to whom Chiron is in the fifth field, or analogous to the sign of Leo as the natural fifth field, and where their Achilles is the heel, refers to the place that relates to the formation of individuality.

It is likely that you learned early that what you express is not well received, hiding experiences and painful feelings from the past, if you are able to accept these wounds the blockage may disappear.

You can get sick if you have to do something that requires you to show yourself or act in front of an audience.

Your personal expression can be harsh, and indifferent to any concern for what others may think, reaching the extreme of having fun being offensive.

You find it difficult to accept the low and ignoble side of life. You prefer to see things from the angle of great gestures, theatrical attitudes and archetypal dramas of the heart and its passions.

Maybe receiving theater classes, singing lessons or free drawing exercises will help you reconnect with that lost feeling of who you are, through them you can release a great vitality.

Then you will receive the gift of deep respect for your own inner being and that of others, as well as the ability to see and respect the spark of divinity within each one of us.

The heart is closed, it is difficult for you to express yourself and you can even feel that creativity is not a characteristic that describes you. 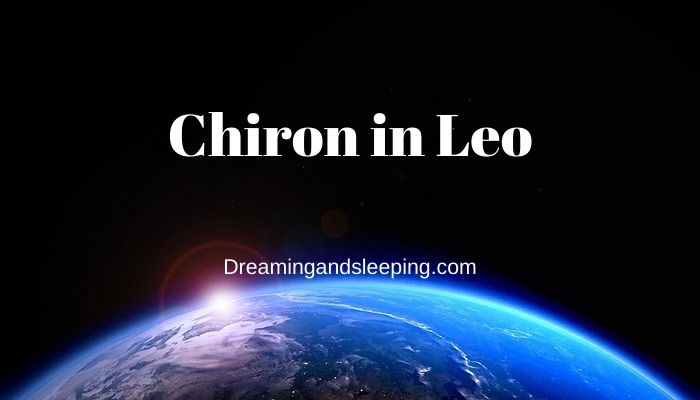 You feel that you have no luck in love and that the situations where fun comes into play generate a lot of anxiety, just like being the center of attention.

You are special to make others feel as if they were kings, your presence elevates them. You just have to remember that love is inside of you, it does not fall from the sky, you really feel it because it is just born inside, and nobody grants it or anything.

You validate the confidence of the rest so that they are themselves without fear, you do not reject the different ones because you stimulate originality in any of its forms. People approach you because your warmth makes them feel safe.

Something happened in your childhood that caused your spontaneity to be cut off and you don’t want to be the center of attention for fear of ridicule, making this your wound.

There is excessive shyness or anxiety when you have to star in something, but be careful, it is not about attracting attention because yes, but for the right reasons. Do not deprive yourself of shining in what you love for a bitter drink of the past.

Taking classes of any artistic expression (especially if you have to improvise), will uncover your creative potential and give you a lot of internal security and satisfaction.

In addition, these activities will greatly improve your self-confidence, making you more attractive when it comes to conquest.

Fundamentally, the most wounded is their ability to be spontaneous. Fifth is a field of fun and joy, and these individuals are simply unable to relax and enjoy the moment. Unable to simply experience the moment. And if they do, they usually go to extremes.

They often hide their crushed spontaneity in childhood and are hypersensitive to ridicule. Some people get rid of this by playing clowns, pretending to be funny to make people laugh, and some developing refinement again, almost at the royal level.

It tends to get cold and control to the point that others feel funny and offended. All of this irresistibly reminds me of a cool Charlie Chaplin or an icy Buster Keaton.

People with Chiron in the fifth field have problems in the area of ​​creativity and ability, especially when it comes to their self-expression.

Often very early in childhood they give up their favorite creative expression, which during that period they really have and very much show, but as a rule then they become something like an exhibit of parents who work hard or start trying to show everyone their little genius, and how their the child sings, recites, plays or plays beautifully.

They may have, as I said, shown the right qualities and signs to achieve something in these or similar areas, but again, as a rule, some kind of injury or unexplained defect or simple disgust happens. Or, in a way, feel early and learn that what is being displayed is not readily received in places where the display of talent is forced.

So, the first creations were, in fact, in some way a physical necessity, and only depending on the parents’ gaze on them, these persons could or could believe that what they were producing was dirty, embarrassing and unacceptable.

If something is ugly and mom and dad say it’s nice, they live with that attitude, so later on, whenever people with Chiron in the fifth field want to express something, they face inexplicable resistance, creative blockage, and internal conflict.

When partnerships are about the destructive side of the partner, as if they do not notice and are able to repeatedly experience disappointment, insults, deceit, as if they were blind and blind.

As they try to create something creative or at least do it, they are persistently guilty and not confident, so they give up the struggle to express themselves and accept to be represented through family or partners. And that creates as a result of only two situations, either they completely surrender or become envious.

It is the story of an old sick king whose kingdom is in danger. He expects a successor to come who will save the kingdom, who will give it to him. His sons, potential heirs, in order to succeed him had to prove their worth.

One of the sons is necessarily lame, ugly or stupid, his brothers make fun of him and nobody takes him seriously as a possible candidate.

But in the end, he is always the one who saves the kingdom and inherits his father.

In Greek mythology, Chiron was the wisest of the Centaurs (half men, half horses), which during a war between humans and their species was hit by an arrow that caused a wound from which he could never heal, but while looking for solutions for his pain, he discovered ways to help others with their various ailments.

Of course, being half animal, his first reaction was one linked to fury, then suffering, later needing to heal and finally acceptance: Chiron had become resilient.

And this is exactly what this asteroid is that orbits between Saturn (hard lessons of life), and Uranus (awakening of consciousness).

Its function is to make us understand that those things that we don’t like about ourselves, the traumas, what shames us and makes us feel at war with life itself are there to make us reach resilience and become stronger and wiser than before: that is, to understand that the cure is in us and not outside.

That is why the sign where we have it will explain how we exercise our ability to resolve / fix things, what kind of adjustments we make, and what we feel we cannot finish solving in our own life (the chelonian wound).

The latter makes we feel helpless but strangely we are very good at advising / solving that in the lives of other people, because it is a blind spot under our perception.

The house where we have Chiron will be the area of ​​our life in which we apply our ability to fixers and also where we would like others to fill that emptiness we feel due to that pain.

For Chiron there are two stories. The official is that of the centaur son of Saturn and of an oceanic (woman of the sea) called Filila.

In this version, Chiron is a doctor recognized throughout Olympus for his wisdom and good character.

Although, above all, they want to get rid of these unpleasant experiences of the heart with some form of creativity, they are often quite incapable of doing so. This disability is the result of painful memories and feelings of the past, and unblocking is only possible if you are prepared to accept those wounds.

These individuals are almost able to get sick when they need to do something creative, and especially if there is some kind of public performance.

Exposure to glances creates a sense of vulnerability most commonly manifested by physical nausea. Often, actors or singers have this problem, which they call the porch.

This condition is caused by lack of confidence, on the one hand, and recourse to an unconscious desire to be the most brilliant star and hero of large scale, on the other.

These persons are mixed with the awareness of what was before with the need for admiration, and they are often haunted by the feeling of living as if they had been deprived of that desired certain form of glory, and their flattery remained their only desire.

And they need to think, actually, because they may just overestimate other people and feel envy and anger towards them.

The solution lies in honesty and sincere recognition, because unless this desire of a completely sincere ego is acknowledged in these persons, to acquire happiness, success or some achievements emphatically from others, they gradually become more bitter and devastate and what they have created, however much .

They are constantly in a state of hurt, hiding their creative aspirations, pretending that they are not very important and that they do not really care. Often, they are afraid of other people’s envy and bring evil and vindictive people into their lives.

What is important to teach people with Chiron in the fifth field is to distinguish the creation of anything in life for the sake of gaining the power, prestige, and satisfaction of others – from the creation out of pure pleasure.

And we know the difference between chastity and heroism, in which heroism is to defend oneself from others, and chastity from others. Both coyote and heroism belong to the sign of the Lion and the fifth field.

In these persons, Chiron was created in the fifth field by an incurable naivety and a belief that if they behaved decently, they would be treated accordingly.

That the good deeds will return to the good. And if that does not happen to them on several occasions, and often does not, they become confused and at least risk depression.

Although they believe deep down in themselves that people are basically good, they always want to preserve themselves from the wickedness of the world, but not from their own wickedness.