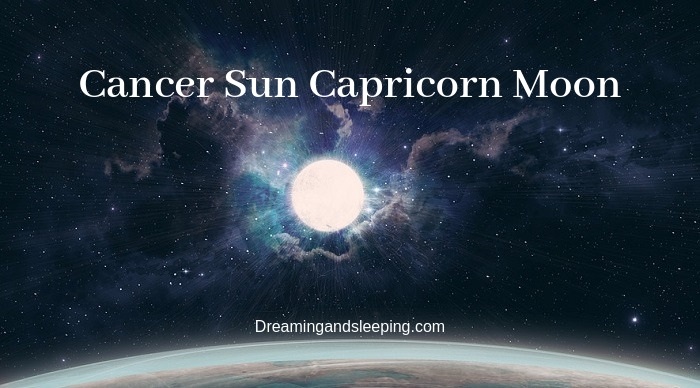 Did you know that the luminaries are mentioned in some places in the Bible – it is said that God created the two great lights; one light was greater, and it was made to rule the day, and one “smaller” but equally important, to rule the night.

And even more, God made the stars also. In the Book of Genesis 1:16-18 it is said: God set these two light in the atmosphere of the sky to give light in the Earth, and to control over the day and above the night, and to separate the daylight from the darkness: and God saw that it was good.

Now, also in the modern Astrology, the significance of the Moon and the Sun became even more important than other planetary factors in the natal chart; of course, we are not saying that those others astrological elements are not relevant.

Today, we are examining into the life of the person who has luminaries, the Sun and the Moon located in the Cancer and Capricorn Zodiac sign; and we will tell you right now that this is one combination that is considered very successful.

Read all about this topic and make your own conclusion.

This person is focused on success, the one that has to have authority in most of the personal connections in his life; and he feels the need to testify to the concrete results of his efforts.

This is a human being who is an extremely hard-working person and the very ambitious one – it is important for him to achieve success on the material plane and to prove himself in his life, and we mean that he shows this ambition in every field.

What is also so characteristical of this person is that he often reaches success through a hard time, and pain – but he realises that this is sometimes necessary for him to grow. And more importantly, he feels that this is in some way, his destiny that he cannot escape; so instead of fighting his fate, he will simply embrace it and welcome everything that is on his way.

He is the one person who often appears to be much more mature than he truly is, and he is like he is born with some knowledge.

Basically, he is the person who is quite aware of his values – this is the person who loves to play a role that basically does not belong to him completely because he knows that in this way leaves a decisive impression on other people. But leaving a good first impression is the first step in his way toward success, he will try to be polite, not overly invasive and will give just as much as he thinks is enough.

One of his virtues is the one that not many people these days have – he is very responsible and will rarely promise something if he cannot keep that promise. Work is the cornerstone of his life, and he will give the best out of him, regardless of what he does – from the smallest tasks to the most complex, this is the person who will give his best for the best results.

Very soon he gets the sense of responsibility and thanks to this he is the most intelligent and the most mature of all Cancer people, because the Moon in the Sagittarius makes this difference happen.

As far as his negative traits come, we must say that this person who has Sun and Moon located in the Cancer and Sagittarius seem to be stiffer than in fact, he is in his true essence.

Here what is the problem – he is very emotional, but it is hard for him to show his feelings and he is turning to traditional style and conservative values if he feels something that is overly passionate or extraordinary.

There is no doubt that he can overcome various troubles and problems through his “strong” back, and he will never particularly complain to anyone; instead, he will be one passive aggressive person who will deal with this stress in the most negative way possible.

Even more, this is the person who has difficulty in establishing a balance between his inner contradictory tendencies: illusion and cruel clarity, tenderness and lack of interest, intuition and rationalisation.

He must realise that not everything in life can be rationalised and that he needs to nourish that inner feeling that is telling him where to go and what to do; instead of continually trying to neglect this part of his personality.

So, the main goal in the life of this individual is to make his life better and to achieve a much-desired balance between these different aspirations.

When it comes to matters of heart and passionate aspirations has an irresistible, almost childish need for emotions, but also a constant fear that someone will abuse it. These two tendencies are conflicted in his love life and believe us when we tell you that this person with the luminaries in Cancer and Sagittarius signs struggles a lot.

Partner relationships are very important to him and play a significant role in his life, and we must say that this also applies to business relations, but also to marital relationships that can be crippled just to meet social ambitions. Fear and emotionality are always present in his actions, unfortunately, and he has to work hard to relax in love relations.

The success or failure of his sentimental life will also depend on his personal development; he needs to learn to become self-sufficient and to get rid of the pattern of the habits gained in childhood, or in his youth. He must be more independent, or just to wake up this “ability” that he undeniably has.

So, we have mentioned how this human being can be tormented by his fears that he is going to be abused in a relationship, and the deep need to love someone; and you can imagine how his relationships suffer because of this.

Often, when in a love relationship, he realises that he is unhappy because he actually hides his own thirst for attention and gentleness, masking it with some completely fake needs.

If he has a person who will be his true match, and if he is able to establish a spiritual fund with that other person, he will have at his disposal a large assortment of useful qualities for a fruitful inclusion in all life activities.

He has all – prudence, seriousness, concentration, effectiveness and organisation, all qualities that will enable him to make his other half better than it was the day before. Then he will be able to subordinate his ambitions to one goal only – to be happy in love.

This is not a personality profile that needs to be conditioned, blackmailed, accelerated or forced to do anything in love (or in any other part of his life) since the one that has luminaries in the Cancer and Capricorn combination is extremely thorough, knows how to feel the right time for important decisions and how it is older – and does not like some drastic changes.

Who will be his perfect match? This could be a person who belongs to the Zodiac sign Scorpio! This person always keeps everything under control and manage his feelings very well, sometimes he even hides them, and for a Scorpio lover, this is not a problem.

He will be able to show how vulnerable he is to the Scorpio partner; their physical and mental potential is a good connection. This can cause unbridled, magnetic attraction.

Both lovers, in this case, are aware of themselves and know how much they are worth. They are used by each other, and they do not hide it at all.

People who do not know him cannot at all determine his character, and it takes a lot of time from him to open to his friends, but when that happens – he is with a loyal and dedicated friend to the core.

He cherishes old friendships and always rejoices in childhood, school period, and many of his friends are close to him since his youth. It may also be prone to great efforts to come to something enduring, and close personal connections fall under this category.

In the example of the person who has Sun and Moon located in the Cancer and Capricorn sign, shows a cohesion of two different forces, the static and raw Moon located in the Capricorn, and the continuous emotional oscillations of the Sun in the Cancer give birth to nature in the constant search for conscious confirmation of one’s own values and sincere acknowledgement of its qualities.

This unconscious influence, which makes the person actively participate in life, does not exclude certain shyness and the formation of internal blockades when connected to other people, new people in his life, which hinder the possibility of total activity and affirmation.

So, this is one special combination of interesting ambition that has a soul. This person is surprisingly, well respected by others, despite a slightly reserved posture. He is serious and determined to lead creative work that will bring him an amazing success in his life.

In addition, we could say that this is the person who slightly discourages attention to the strength of his personality and feels the pressure of responsibility arising from such an attitude, but she fails to reconcile in her two opposing forces shaping his life.