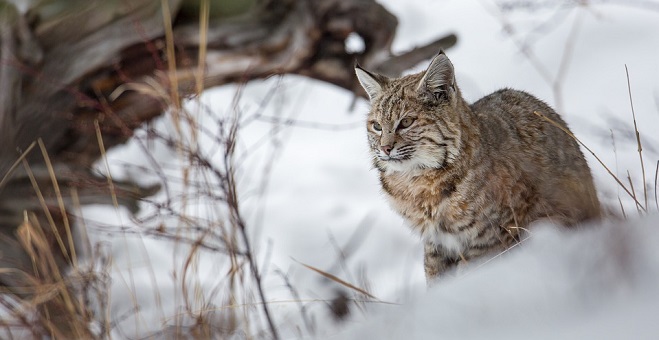 Bobcats are felines that inhabit only few places on our planet. Like many other felines in the nature, they were feared by people.

Even though their appearance is stunning to the observer, these animals can be quite cunning and trick their prey right into their claws.

Intelligence – Bobcats are very smart. They understand well how systems in the nature work and they rarely end up without a meal.

Bobcats prey on smaller animals and easily ambush them right into their paws.

Stealth – Bobcats ambush their prey with such patience and strategy that it is almost incredible how stealthy there are.

If they were people they would probably have no problem stealing anything they wanted.

Bobcat as a totem

As totems, bobcats are symbols of intelligence, solitude, strategy and patience. People born under this totem are interesting personalities. They are lonesome people who like relying only on their skills but they know how to stand their ground when needed.

One of their biggest traits is their intelligence. With their brilliant minds, they are able to come up with plans and ideas that can rarely be beaten.

This allows them to adapt well in almost all life situations and social groups. They can talk about almost anything with anyone, and still keep important information to themselves.

Another great trait they have is patience. They know that good opportunities are waiting for them they only have to have enough patience in life.

They come up with strategies that help them bring their dreams to life easier. Rushing to judgment or with their actions is not what they do.

“Bobcat” people are prepared to wait patiently for the right opportunity and ignore everything else that comes their way. This can sometimes sabotage them in their love life because waiting for that perfect person often leaves them alone for a very long time.

But this doesn’t represent a difficulty for people born under this sign. If they can’t find that one person they are going to adore, they will accept their solitude.

Bobcats are very playful animals as well. They use this tactic to confuse their prey and make it think they are only playing. But, when the poor thing is not expecting the bobcat will attack.

This is why people born under this totem are very dangerous when it comes to business and social relations.

Just when you think you know this person well, he or she will change its attitude and give you that final, fatal blow.

Bobcat as a symbol in a dream

Bobcats as symbols in a dream usually bring us bad news. If you had a dream about a bobcat in general, then this dream represents problems.

Perhaps you will experience something terrifying and your safety is going to be endangered.

Bobcat can also symbolize betrayal by someone who is very close to you. This betrayal could come from your partner or even your friend, who kept their emotions bottled up for a very long time.

Dream about a dead bobcat brings you success at work and new business opportunities.

If you want to advance in whatever you are doing then you need to take these opportunities and make something good out of them.

If bobcat in your dream was standing in front of you, then you have an enemy in your life that is preying on you.

This person could be acting as your friend but his or hers intentions are much more dangerous.

Bobcat as a symbol in different cultures

Bobcat symbolism dates back for centuries. People both feared and found this large cat to be mesmerizing and that is easy to see in her symbolic meaning.

In Native American culture, bobcat had a very negative role and it was considered a symbol of greed, selfishness and an outcast.

Bobcat represented the disobedience of rules and living life as you are the only person that matters.

In some other tribes, bobcats were considered to have a hunting medicine. Tribes like Pawnee, used bobcat furs to wrap their babies after birth to give them blessings, since bobcats were linked to the starts and celestial powers.

In modern culture, bobcats are still considered to be cunning animals that capture people’s attention easily.

They are considered to be lone warriors who depend only on themselves to survive. To do this they need to have intelligence and courage to face those who are stronger and faster.

To honor their respect to these large cats, people tattoo bobcats on their bodies. This helps them express parts of their personalities that are similar to this amazing cat.

Even though bobcat symbolism isn’t always positive, there is still a part of their character that makes people love them.

Their confidence and ability to fight for themselves is what captures our appreciation the most and many of us envy that kind of self-love and resilience.