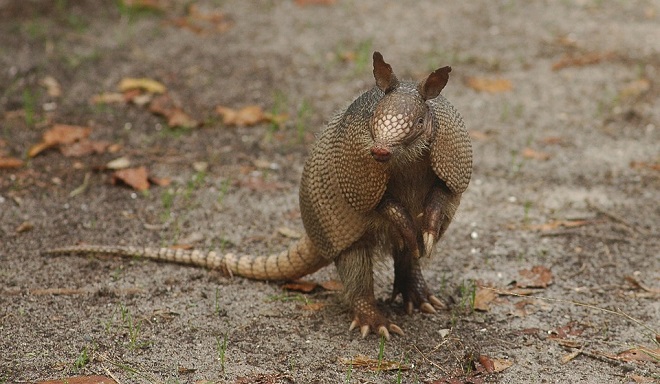 Only when we encounter an animal as unique as armadillo, we start to realize how beautiful and amazing our planet really is. These small shielded animals inhabit only some parts of our planet.

Symbolism of an armadillo was grown for centuries, only among cultures that lived next to it.

Now that we have been introduced to this beautiful animal, we are able to create our own vision and symbolism for it.

Defensive – Armadillos just like all other animals protected by a shell, are very defensive. This kind of behavior protects them from predators that are out to get them.

This defense mechanism is not only applied to predators since armadillos are defensive to us humans as well.

Resilient – These shielded animals can endure some really hard living conditions. They usually inhabit dry areas of the earth, so enduring several days without food and water is something they have mastered.

Armadillo as a totem

People born under this totem are very cautious in life. They are always on the guard for potential dangers that might be lurking from their surroundings.

Being this way often leads to missing out on opportunities which can be a bit sad. If they had enough courage to try new things and break out of their shell, they would be able to do remarkable things.

Armadillo totem represents compassion. Everyone protected by this totem is bound to be compassionate and caring towards other people, which makes them amazing friends and partners.

Every trouble you might have is going to be listened by them and you will get an honest advice.

People protected by an armadillo totem are also very judgemental and limited when it comes to their thinking.

They belong to conservative people who don’t always see the bigger picture in life. We can’t really call them free spirits, since they are more logical and practical in life.

In love and career they tend to choose secure positions that offers them stability and a regular income.

Without many experiments in life, these people live their lives and enjoy it in their own way. Even if it seems like a boring life to others, they have everything they need underneath their secure shell.

Armadillo as a symbol in a dream

As symbols in dreams, armadillos don’t appear often. We rarely think about them or even see them, which makes their dream symbolism even more important.

If you saw an armadillo in your dream, then this means you are dealing with some insecurity in life.

Before your life passes by, be yourself and don’t be afraid.

If armadillo in your dream was dead, then you might be able to defeat your fear of something.

Your attitude will change and you will be more open for new opportunities.

Armadillo that was talking to you in your dream represents someone who is close to you. perhaps a person in your life needs assistance or guidance, and you are the only person who is capable enough to offer help.

If you saw several armadillos in your dream, then you are overwhelmed by something and your brain is working 24/7.

Fear is slowly overtaking your life and making it hard to focus on what is important.

Armadillo as a symbol in different cultures

Armadillo symbolism was tied to cultures that lived next to it. But after this peculiar creature was introduced to the world, we all became mesmerized by it.

After armadillo was introduced to the broader public, it was discovered that it is a potential disease threat since his body heat and metabolism are suitable for bacteria development.

Armadillos are often used as motives in art, culture and poetry. In Texas, armadillo is considered to be state’s official animal.

To other cultures, this shielded animal is intriguing and mysterious. Their shells are even used to make an instrument called Andean flute.

In some parts of the world, armadillos are a regular source of food and many say it tastes just like pork.

Another thing that is interesting about armadillos is that, when scared they jump 3-4 feet in the air and often end up as road kill.

The Aztecs called armadillo the turtle rabbit, since this animal had a unique appearance and was different from all other forest animals.

In Spain, armadillo was called the Little armored one. All of these names suggest that people were intrigued by armadillo’s appearance and were trying to define the specie it belonged to.

Armadillos are still puzzling to us and belong to the New World placental mammals for a reason. Their shy nature will continue to mesmerize us and we have a lot to learn about these beautiful creatures.