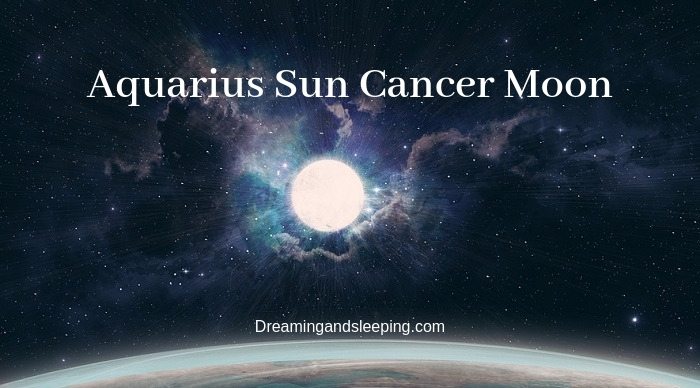 Often times you read in the horoscope or any astrologically related article about the angles that are present in the natal chart. But what are they, and how they affect our lives in some way?

They are positioned between the different planets, and in Astrology, they are called aspects and knowing them, it is really important so that you can understand why some angels can intensify, reduce, and transform the interpretations for each planet.

So, in this sense, we get with the favorable (the good angles) and the unfavorable (who bring much more negativity) aspects.

But one thing that we must speak are luminaries, cause without them, there would not be any natal chart, any horoscope, etc. – in today’s case, we are looking into the life of the person who has Sun and Moon positioned in Aquarius and Cancer sign. Right away, we will tell you that here we encounter one very interesting nature – a deeply complex person.

But first, we must speak of many good aspects that are connected to the person with such luminary positions – he is able to adapt to circumstances, and never to change his personality deeply. He firmly states that it is important to preserve it, and will do whatever may be in his power to maintain such impact.

However, this human being is not always aware of the changes that are taking place inside of him, because he remains related to the dreams that he has, and the devotion to first aspirations. And as long as his ideal remains very present in its spirit, he has the impression that he moves in eternity, and that he is succeeding in things that he sees as relevant.

We must also say that this human being is a great fighter, and if such a person finds himself in an unpleasant situation to show how strong he is he can manage, and this is a two-way struggle, with himself, and with problems that around him. He can make it, and there is no doubt about it.

Also, this is the person whose authority is always painted with some care for others – he has a great intuition in evaluating people and often turns to others’ desires and needs.

However, in everyday relationships, this is the person who often has phases of apathy, even serious chronic depression, so it is one additional struggle where he must have harmony so that he can make the day.

The high sensitivity of the Moons location in the Cancer does not fit best with other features that are present because of the Sun’s location in the Aquarius, so this combination will often be expressed interestingly.

From one side, there are feelings, and on the other, the reason and the will. Most often, one will overcome one, and the other another, other characteristics – but in reality, this person’s character is seen as uneven, with the unexpected behavior and internal dissatisfaction, because he will always feel that he has not satisfied one side of his being.

But because of the immense emotionality, this is the person, who has so many fears, and among them, there is a fear of ridicule or criticism sometimes makes him incredibly shy, discreet, diplomatic and conventional person.

For that innate insecurity, he often withdraws from all unpleasant things. The main advice in this sense is that he must take care of his moods, avoiding observing at things from the point of view that he is the victim. He should stop making his desires a reality, having an illusion of himself and others.

Your existence is largely influenced by strong emotions from one side, and the reason from another, this creates a conflict that is very problematic for having solid love relations.

This human being who has Sun and Moon located in Aquarius and Cancer signs is much quieter, shy and more sensitive than typical Aquarius person that you can meet (of course the Aquarius people are not so open, to begin with, but can be more communicative if they feel like it).

There is no doubt that this human being has strong emotions and he is the one that enjoys romantic and unusual events and adventures (all thanks to the Sun’s location in the Aquarius sign).

His lovers, however, must be read for many mood swings, he has a lot of ups and downs, especially if he is involved in some emotional situations.

So, what do we know so far? He is an emotional person with the ability to love and to take care of his lovers, and family, but sometimes his specific mood can be confusing, and his reason can make things even worse.

Often, on the emotional plane, the one who has Sun and Moon located in Aquarius and Cancer signs can be prone to sudden, eccentric, unusual emotional relationships, but relationships that begin suddenly, and quickly explode very explosively.

For any other person on this planet, this could be just a part of his life, but for our candidate, this could be the destruction of everything that he knows and believes.

But one more things needs to be remembered here, and potential lovers must know this fact – this is the person who is more than ready for great sacrifices for family peace and harmony in marriage, only in case they choose their loved one slowly, in time.

He is endowed with great sensitivity, and will most likely suffer because of non-harmony in his surroundings -so either he will have a harmonious relationship, or he will be alone.

A person who has luminaries located in Aquarius and Cancer combination can be a good mediator in interpersonal relations but always needs to listen to his intuition of things that are reconcilable and which do not.

He should not waste his energy on what others think, but to accept him completely and thus show to the public and the environment how much he is really worth. Often, such a profile has situations of great disappointment, belief in people, as if it is easy to give confidence that will not be given back.

So the only person who will come as a good partner is the one that is born in Scorpio Zodiac sign – these two lovers truly have the amazing potential to create a very passionate relationship with the stress on the possibility of a gradual realization of a deeper understanding that could be substantially based on an intuitive level (both of them are very intuitive and know how to use that strength.)

So, these two love birds can succeed, even without much the words and any grand gestures, they can achieve a good mutual connection; they feel intuitive and understand their mutual emotional desires and needs.

Here we meet a friend that is endowed with great sensitivity, and this person suffers very much when it comes to the interpersonal relations; this all comes from deep and long-lasting conflicts that are between people in his life.

So, he, in time becomes an expert in solving all of those quarrels, trying to calm and eliminate differences.

However, his perception of others is not always realistic, so during life, he has so many people who are there for all the wrong reasons, and the only one that is hurt is him.

He is the one that will avoid listening to his intuition and the voice that is saying that certain friends are not good for him. So he should not give his trust and confidence so easily – maybe his friends should go through many tests before they realise that someone could be his friend.

However, he rarely dramatises if he determines that he was expecting too much of others.

When disappointment arises (and it will, he attracts them, and provokes them with his attitude and behavior), he is not the one that will doubt his values, the sound principles in which he deeply believes. He is lead by the thought that everything will eventually be settled.

So, this type of behavior and “optimism” leads to passivity, but it helps her to persevere in a tireless search for friendship.

In this connection, the Sun’s location in the Aquarius is hardly in control of the variability of emotions and the self-absorption of self, even in terms of the most important distinctions, which are characteristic of the world of Cancer (the Moons location).

Some say that it is a good thing to have such contradiction in a personal horoscope since that person can have the best out of both world if he tries to do so, but from another point of constant struggles cannot be beneficial for constant development and growth.

This is why a person who, although very mobile in life, is in reality obsessed with eternal doubts and constant insecurity.

He is both strong and weak at the same time, but he still succeeds in making personal victories from her weaknesses – he manages to overcome his personal challenges and make his way into to the world, because he has something to offer to it.