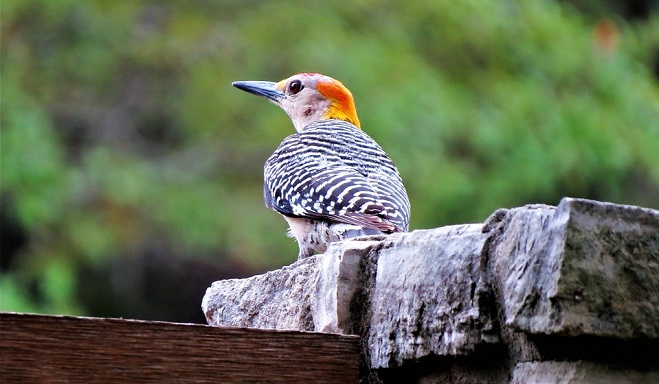 Woodpeckers are small birds that are recognizable for the sounds they make. Woodpeckers peck on wood in search for insects and worms so when they do that, we can all hear them among trees.

They were easy to separate from all other bird species because of this so the ancient people didn’t have a lot of trouble creating woodpecker symbolism and including them into their stories and myths.

Woodpeckers inhabit a vast amount of our planet and we can find them in almost all parts of the world. The only thing that is different about them, in different cultures, is their symbolism.

Noisy – Woodpeckers are noisy by nature. They use their beaks to break the tree trunks and catch worms and insects.

Smart – Like a lot of other bird species woodpeckers are very smart. They use their intelligence to get by and avoid being eaten by a larger predator.

Numb – Woodpeckers can’t sing like other birds. Instead they can make small chirping sounds or peck on wood in order to send sound signals to other woodpeckers.

Woodpecker as a totem

Woodpeckers as totems are interesting. They are representations of communication, attentive nature and creativity. People born under this totem are very loud and communication is everything to them.

Talking to other people and sharing new ideas is what they enjoy. Being alone with their thoughts is not something they do well, so they will always accept an invitation to a social gathering.

Jobs that require communicating skills are perfect for them.

On the other side, every job that requires silent work and concentration within an office is definitely not for them.

This is why they tend to be successful in almost all areas of life without many failures behind them.

They are also very wise people. It is nice to have them as friends because they can always share a good piece of advice in time of need. They see life differently than other people and tend to rationalize things without involving drama.

Woodpecker people are creative people and this is why creative jobs are also suitable for them. Even if they don’t work on a creative job they enjoy visiting theaters, museums and art centers. They are creative in their way of thinking so innovative ideas always pop up in their heads.

To some people, they can be a little bit loud and talk too much, but this is just a part of who they are. They can’t change this about themselves.

But, if you listen to them carefully you can hear a lot of great thoughts and ideas.

Woodpecker people are very nurturing and kind. They approach others with an open mind and they enjoy hearing other people thoughts.

They care deeply for people that are in their lives and they would never do something to hurt them.

They protect people they love from everyone and everything and they would never let anything to happen to them.

Their lives are very much balanced with little extremes and sudden changes. The only negative side to them could be talking too much, if this is something you don’t like in people.

But, if you do get to know them better you will forget about that completely and get taken away by their charm and kindness.

Woodpecker as a symbol in a dream

Woodpeckers in our dreams are unique symbols. Sometimes we can just hear the sound they make without seeing them, depending on the type of dream we are having.

If you saw a woodpecker in your dream, then this dream represents good news that are about to come to you. Someone you know is going to pass them on and they are going to be extremely important for your upcoming period.

If you saw a dead woodpecker in your dream, then this dream is a representation of bad news. They might be linked directly to you, your personal life or career, or to someone close to you. Either way, you won’t hear anything positive.

If you only heard a woodpecker in your dream, then you are going to have a lot of luck in the following period. Things are finally going to go back in order and everything you have planned is going to be very successful.

If you had a dream about several woodpeckers, then you might be overwhelmed by certain people in your life. They are constantly behind your back and nagging you about smallest things. Confronting them would be the best thing because they won’t stop by themselves.

Woodpecker as a symbol in different cultures

Woodpeckers have an interesting symbolism and since they are present in all parts of the globe, many cultures portrayed them in their own way.

Woodpecker sounds were considered to be sounds of the nature. In Shamanic rituals, shamans would recreate these sounds in order to connect with the “spiritual world”.

Woodpecker is also a protector of the nature. It is often linked to the astrological sign of Aries because of its initiating characteristic. They are motivators and influencers who take initiative in life.

The Sioux people believed that if you wear woodpecker’s feathers you will gain the ability to speak to the thunder or you are going to receive important messages.

Ancient people believed that woodpecker feathers were some sort of gate to the spiritual world and its messages.

In popular culture, woodpeckers often appear in children shows and cartoons. Probably the most popular one is Woody the Woodpecker. This popular cartoon introduced thousands of children across the world to this magnificent bird and they adored it.

Woodpeckers often appear as tattoos on our bodies to reflect that unique symbolism. As tattoos woodpeckers are symbols of initiative, communication, nurturing nature, intelligence and creativity.

Overall, woodpeckers are interesting birds with few characteristics that set them apart from other bird species and makes them unique in their own way.