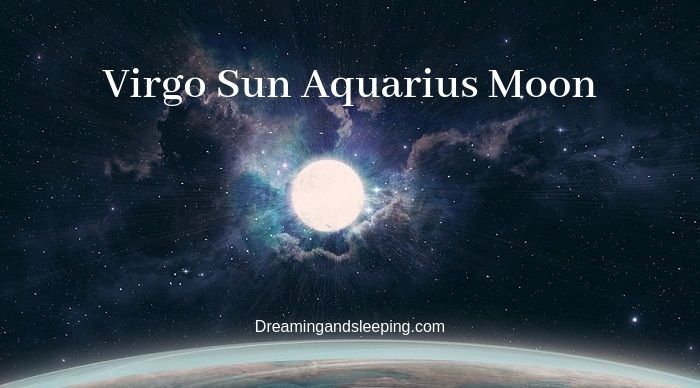 Some astrologers like to consider the luminaries and in particular the Moon as the pointer of public behavior and spontaneous reactive patterns that are triggered by the emotions and all those things that come from the “inside”.

Everything that we do may come from the Moons influence, and this is the things that are maybe not so obvious but are essential if we want to understand human nature via person horoscope.

What seems clear in the story of the natal charts is that the Moon represents less conscious and some hidden levels of character and the area in which it falls, and it shows an instinctive, some form of, maybe inherited quality.

Today we are looking into the life of the human who has Sun positioned in the Virgo sign and Moon in the Aquarius sign; this observation will lead us closer to the understanding of this character.

Is it good or bad, can some of his traits be altered, or is he just perfect? Read all about this.

In the beginning, we must say that this person has such nature that is always open to his own needs, but also to the needs of others; he is altruistic in some way and can be selfless in this way, directing his actions to the human good.

He wants to good in society and is a person who can set realistic goals for his life, supported by constructive criticism in conflicts not only of his own intentions but also in the outside world.

So, in the case of this particular Virgo person, and his criticism is well directed and truly has its purpose.

In many cases, people who criticise others do this out of some unreasonable need, but not this person, he has something bigger on his mind and should be respected in this way.

It is also said that this combination of luminaries gives careful adventurers, idealists and sincere friends – and this person has all of these traits.

He has almost always extraordinary and especially strong personality, above all in an intellectual sense – just a few people can match him in this sense, he is very smart and likes to educate himself.

He believes that his knowledge is his strong point and that he can use it for the benefit of others. He can learn fast, and in some cases, he already knows some things that others do not know yet, and he may be seen because of this as the genius or the lunatic.

He is endowed with marvelous intuition and supernatural ability to analyse character – when this trait is directed in the direction of the help other people, and it is also one of his most amazing virtues.

Difficult situations rarely meet him unprepared because he can deal with problems rationally and neatly, preserving optimism and hope. What an amazing combination – he prepares himself for the best things in life that are about to come!

Sometimes a person who has luminaries located in Virgo and Aquarius signs can be seen, from the outside especially, as an eccentric who does not care what others think – he will seek his own goals in his own way, that for some it may seem weird or even controversial. And sometimes they are, and he must maybe have some balance in this way and at least try to stop himself from saying all of his ideas out loud.

He can even be rebellious – but always with “cause.” Everything in his life must have a reason but just is that sometimes this reason is not good or reasonable in some way, but he believes so stubbornly in them. This stubbornness may even be so problematic that could leave him in a state when no one can understand him or even see him as an average person.

He is very advanced in his thinking, and good concentration is in his favor – but he is not the person who will suit everyone – around him, there is always a dash of unusual and unique – he likes unusual and distant customs.

In the end, he is the person who has a very complex nature, difficult to get to know – one side of his personality requires first of all safety while the other dreams of freedom, independence and fantasy. Sometimes these two cannot go well together, and from this point, problems occur.

Even in love, this is the person who is very unconventional and open to new things, prone to experimentation and he probably lives intensively – that’s what makes him different from the typical representatives of the Virgo sign (that are in most cases very closed and rigid even).

Even if he may seem very strange to others because he often changes his moods – you will never know what he thinks or does he even like you.

He acts confidently, and when he becomes mature, he takes the stand – if you like him, it’s nice – if you do not like it there is no problem. He has no problem (or a little problem) to be rejected from a person who he likes or wants to be in a relationship.

He is able to accept this with the maturity, and he can look at this situation as the opportunity to grow and prosper, and be even a better lover for some other lovers that may come along his way.

But the main thing is that this person enjoys being different, even pride himself with his individualism.

Although he needs time to trust someone, when he opens he shows his emotions; but it is a little harder to forgive the bad actions of his lovers, as it tries always to be correct.

This is the person who in the first place sees himself as the lover of the world since he loves the people, and in this sense, he has somewhat strange relations with people, but still, he wants to belong to someone.

He has a “caretaker” approach and social enthusiasm when it comes to relations with lovers, and it is also important never be without some moral freedom.

Although he is particularly distrustful, he is very cautious not to fall out of as the fool in love relationship, and it will surely hurt his ego. But he is able to accept the fact that he is not wanted in some way, and these and a similar situation will never hurt his self-esteem, or jeopardise him in any way.

And one more thing must be said – this person is more inclined to friendship than to love relations because he is afraid that he will not drift into the dizziness of passion and lose his integrity there.

In an emotional sense, for the person who has Sun and Moon located in the Virgo and Aquarius sign needs a smart, calm, patient person with whom he will always share his business goals, work together or a person who is confident, but stable.

He is able to put into persons that can be great marital partners and the persons who give it all for their family and the person they choose, so from the moment of entering into marriage, it is somehow subordinate to that field.

This place belongs to the person who is born in the Libra Zodiac sign – emotional and romantic Libra lover will want to hear the tender and loving words he needs so much.

He expects their partner to dedicate themselves completely and show her life is unthinkable without them and a person who has Sun and Moon in Virgo and Aquarius sign suits this perfectly.

This is the person who has a passion for research, and he wants to put himself in the position that contributes to others and the common good – so maybe he is not the person who will have many friends, but he will try to do something good for many people.

He has a great need for orientation and the environment in which he will express himself, for the people he is identifying to strengthen his personality.

If he has close-minded beings that understand him; who love him and accept him no matter what, and in return, he will never give up on his friends – and as long as this is the case, everything will go well. If it is the opposite, this person feels like his freedom is jeopardised and he moves away.

So, if this person is rejected or misunderstood in any way, he moves away and can even be very happy alone, he does not need others to feel valuable. But on the other hand, if this human being has such support and love that comes from his friends things are good, because he can be even better.

This is an exciting combination of two instinctively contradictory and complementary natures that comes from the Sun in the Virgo sign and the Moon located in the Aquarius sign.

He can be determined, enthusiastic and always ready for new things, he always that he tries to remove certain blockades and defensive mechanisms that too often prevent the Virgo from displaying its humanitarian and social talent, largely suppressed by the too cold and critically minded intellect.