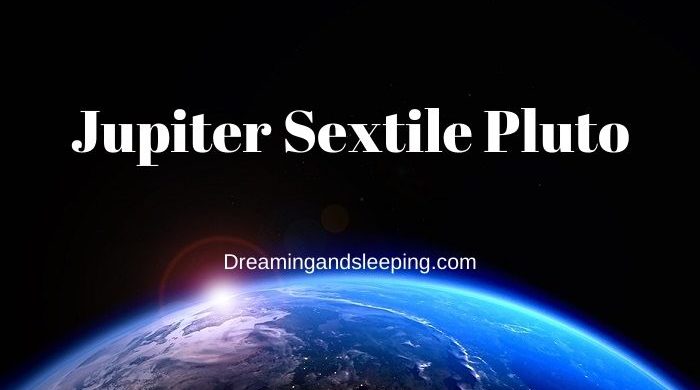 As many astrological articles suggest, sextile as the position in the natal is a very good position, maybe it is not as important as some others but is still relevant for the deeper understanding of the personal horoscope.

To understand more in-depth what does it mean when you have some planets in this position, it means that this is the aspect that describes talents, ways of expression and skills that a person has (it does not mean that they will be used).

This aspect encourages stimulation of the planet, so the person has more creativity, but of course, how and in what time this aspect will be used is something else.

In some way, we could say that the sextile position is the one that gives an enhanced activity. The nature of the sextile is manifested in the individual’s good organization, dynamism and balance.

Today we are looking into one in particular position – Jupiter in sextile with the planet Pluto. What does it mean and how can this person utilities this position better. Read all about this.

Sextile is a positive aspect between the planets when they are 60 degrees away from each other, which actually means they will give us their best qualities.

Now, in the case of the Jupiter and Pluto, this is the aspect that these people have to chance to make something great out of their lives, something major is coming their way, and they should not miss out on it.

It is like the Universe wants to tell them that something we don’t want to miss is about to come.

One of the biggest questions many people ask themselves is – should I accept a change or resist it – and in the case of the Jupiter sextile Pluto, they must accept the change that is coming their way, since the Pluto is the planet of the change. 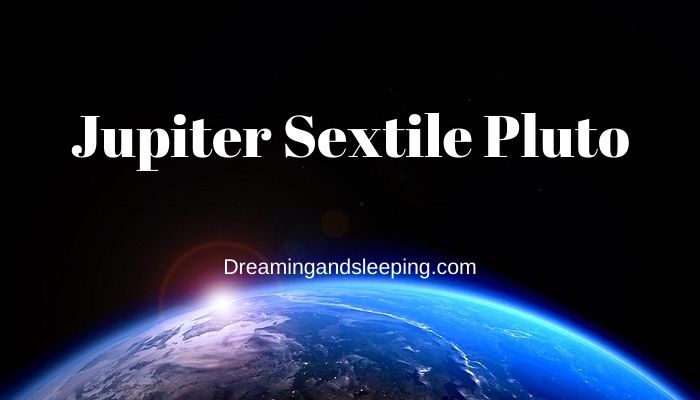 It is very important to find the answer within yourself because sextiles will affect every part of our lives because Jupiter, the planet of expansion, sits in Scorpio, the sign of soul mates and sex. Because of this, there is a strong likelihood that this transit will particularly affect the love life.

If we want to tackle more about the good aspect that this position brings, we can say that for these people it is much more important what is like their journey, rather than the ultimate goal.

The most important thing for them is to know and find out what is the path that they must take in life, and if they choose the right one, almost everything is solved by itself, and the sextile between Jupiter and Pluto gives the best out of it.

But in order to make the right choice, very often we have to make a lot of wrong ones, and this is the main lesson these people have to learn. They truly have so much to give to the world, as you can see in the lives of the celebrity people with this aspect, but they will truly make the difference.

They should be thankful to the planet Jupiter for everything that this planet can give them, right in the time when they should make some right moves in their lives – it gives an insight we need to make the right choice.

It is not enough to talk about love and the things we need in our lives, but the choices should be supported by concrete action.

That is why this year is a good time to commit to finding the love we dreamed of.

In good aspects, with this sextile, a person can achieve true success and gain great wealth, less through work and more through happy circumstances, most often by inheritance, but if there is no talent, there cannot be any success (you can see this if you look at the biographies of any of our famous examples).

So, from a positive point of view, this is the aspect that can give people who have it, to be humans that are full of optimism, positive, and looking at life from one, their own point of view (it does not mean that they are always right and that others understand them completely, but it helps them stay in some form of bubble, and it is no wonder why they have to do something creative so they could express themselves).

When we look at this sextile position, we can see a major encouragement that is directing these people to plunge into their consciousness, and then Pluto will be there to initiate change and transformation – depending on what they find. And here comes the negative aspect of this story, what they could find, could be negative.

Changes can be difficult, and the major changes in the lives of these people do not mean that they will find happiness for sure; it is more the question that they will have many breaks, on the contrary.

Their lives are exciting, but also very difficult – sometimes their personal life suffers very much – many of the personal relationships that served their purpose in some way of their lives will end so that something new will occur in their lives and help them move forward.

The bad aspects will bring blackmail, crime, the person will be the target of racketeering, and major disasters will result in large losses of money – they can show the worst possible traits that a human being can have, and what is even worse, they seem never to regret, accepting such a behavior as a part of their path.

It is relevant that at least in mature years they learn that this is not the only way they could or should lead their lives, there is so much more than this.

Once more, when we look at the negative traits of this person, we must say that for others, this human being may seem arrogant, even more, arrogant person who loves to prescribe and live by their rules, but is not ready to bear the consequences of those rules.

A person is suspicious; in some circumstances, he or she is unrealistic and overconfident, but also learns from mistakes.

This last is the aspect that helps these people to become successful in life, and that they are not lost in their world of madness that becomes even worse, having in mind the fact that they are very creative, but often times very delusional.

Jupiter Sextile Pluto – this transit is considered to be very generous because, during its rule (for all the people who have in their natal charts, they could truly use the best out of the life they live, regardless of the circumstances).

As far as love goes along with the personal connections in life, these people are blessed with opportunities to make meaningful contacts and often times they are married or date some of the most powerful beings in the world, making themselves even more successful.

Additionally, we are not saying that in this connection there cannot be love, cause there is, and the fact that they are in a relationship with some powerful and influential persons just adds up to their charm.

In return, they are those who can give support or assistance to their loved ones, so there is a mutual benefit.

Some say that this is the aspect that can be seen negatively in the lives, for example, of particular circumstances, for example, it will give a war profiteer or a privatization tycoon, but however, money always comes from a paradigm of transformation or one’s death and it is always big money.

But of course, far more often, these are true business people and very capable people who, through a combination of positive virtues, gain wealth, fame and power for themselves as well as for others.

What is most important when we look at this position of planets Jupiter and Pluto, it is good to know that they and their ambition cannot be shaken – these are the people who know what their path is, and where they want to go in their work.

But, it is truly important not to give up their ambition and not to let others judge their work. They need to follow their path.

Sextile brings overcoming limitations, negative thinking, and identifying opportunities. Sextile can be seen as an aspect of emotional and physical harmony. Sextile in astrology manifests all the positive characteristics of a person.

So the Jupiter in a sextile position with the planet Pluto brings, as we have said, so many amazing opportunities for the people, in almost any part of their lives.

For example, the period in the business plan suggests opportunities for strengthening business positions or for advancement on the business ladder while, as far as love is concerned, it can give strong indications for serious community planning and for starting a family.

It seems that this is one position that could truly be used for the realization of numerous of ideas, and the fact is that the people who have this position are different, original and unique and that the only way they could truly be happy, is to follow their own life, not someone else’s.

It may be difficult for the people who are close to them, so it is maybe better to be with those who are ready to sacrifice for them and their careers.