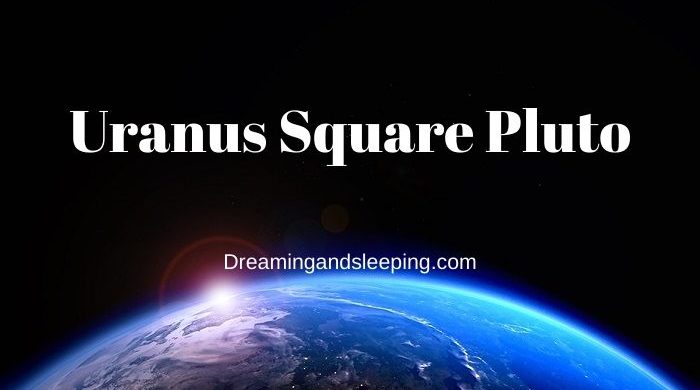 These two planets are bringing us great challenges, crises, in various ways, pushed us into situations that seek to change something.

Read how this square is seen both on a global and personal level.

In some general way, the changes that come from the Uranus and Pluto square position always required us to master and learn some lessons, especially in the sense of enlightenment, where we need something to change if we want to grow in some way.

These two planets bring lessons such as how to get rid of the old and accept the new and for the people who have this position in the natal charts, this is the process of adjusting to the new, and it is difficult (their lives are hard).

These are the people, who grow in times when they undergo radical changes, and each planet makes an impact for itself, but this way together in the energy of a square, that influence is a little more difficult and complicated.

Together they require radical change, whether we want it or not, and changes are often radical, fundamental.

Both Uranus and Pluto are equally to blame for the change.

Uranus is here to awaken it brings awakening, and Pluto is there to help release something, it is much harder to go through all this if it fights for change if the change is negated or escaped. 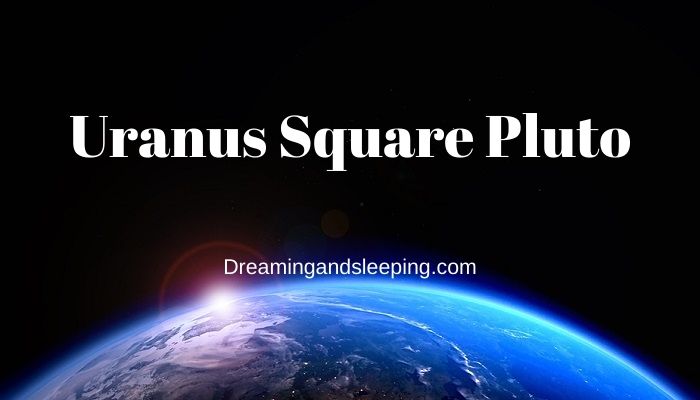 The square itself is an inconvenient aspect where two energies clash, and when they do, they are bringing various challenges, rebellions or conflicts.

The old and the new are in conflict here, and every bad thing that could happen is a possible option, and the good thing that it can bring is the major changes.

Look at this world as the world after the collision of these energies (Uranus-Pluto) leaving nothing the same.

Here, in this square position, we can see people who have a journey in front of them, and they are able to see it as a success based on the personal influence that they make in the world.

In fact, they believe that they are able to make miracles with their individual’s response to the global crises/problems/matters.

You need to know that the planet Uranus is the one that denotes rebellion, and individuality, and here with its connection to the Pluto, it puts the need of an individual in relation to a group, this is the position that awakens each person in a unique way.

On the other side, we get the planet Pluto as the one that denotes death and rebirth, intense energy, the energy of fundamental change, and here it directs its strength to structures, everything that is old, obsolete, and wasteful, or overly used.

In some way, as all changes do, this is the aspect that instills a sense of dissatisfaction with the way these people live, and it also comes with some limitations on a personal plane, on the broader – external plane, and which equally affect them.

This means, as many astrologers say, that it is possible that in their lives some relevant things have been captured in the frog, where the routine, boredom, monotony has arisen because they will remain unhappy.

They are the people who often in their lives feel bound, locked, and they are always looking for ways to change it, even if they do not know how to do it, and often miss out a lot in their lives.

This square can really lead them into some life crisis, especially if that square is supported by some other aspects and transits that are not favorable. This is the square that brings some losses as well and sometimes with this aspect and people can become victims of violence.

Here, happiness in love could be achieved because the planet Uranus is the one that raises both hands and says let’s go, and it will bring joy, but this, of course, means that we need to change something, and in the case of these people it is their faith that love exists.

Often, they have bad experiences in love, and they think that they will never be able to love again.

Have in mind that the planet Pluto is here to purify, redeem, filter, transform and regenerates – so that they could achieve this necessary success in the realm of love.

And you can imagine how much energy there is – together, the two planets together are moving into action and the truth is that this is how they bring anxiety, tension, or some violent reactions, which is all part of the change.

So, their love life could be truly problematic and passionate as well as a violent one. They must see it as the part of the change, not a mandatory state that does not go away.

In an emotional level, this square could bring a much-needed opportunity to an end what has long been needed. This is the last call for help and a chance to change their attitude that they could not love.

In some cases, this square position is the one that pushes people to chase their purpose and ideal jobs out of the place of residence, their country, and for them, it is best suitable if they find something to do that will direct them both a direct and indirect impact on others. This is the change that is needed for the success they need.

They believe, and we feel that they are right is that a change in a world starts fro, a micro-world in their personal life.

Whatever they choose to do, there must be pressure released, since they are not able to work under pressure.

Since the biggest impact of this square is seen in the changes of personal life – change of habits, lifestyle, change of work, some relationship. All of us need to know that the changes that come from Pluto (death, of course not necessarily physical death anymore as a metaphor, transformation, regeneration).

Expect changes that are surprising at first glance (come as a surprise) and they are a result of Uranus’ influence. Anyway change and some new different life than it used to be before.

It is also a known fact that Uranus and Pluto in this aspect are those that bring some chaos, shakes and rebellions – and it is not hard to guess way and how it is possible since we can see new (Uranus) in rebellion against the old (Pluto).

In this way, this is so opposing can bring life crises, the possibility of becoming victims of violence and force majeure. Major life dilemmas are possible; losses are as possible.

Astrologers know that the first meeting of these two planets come as a square, and then you know that changes have started, they are happening now and will continue to happen for some time.

Their transit and cycle are slow to come to an end and finale, but the impact will not go away all night long. This is now something like the ultimate pressure to change something radically and get into a radically new beginning. If you are not for comfort, many people in and around you and anywhere undergoing the same or similar processes.

So together first, each for himself individually and then together (generationally) we can create a better and more reliable future.

In the end, it is relevant for all us to know that the best thing that we could do is to face the challenges and embrace the changes that are clearly needed.

The aspect at stake here is the long-term global, social and personal changes in the long run.

If we wonder if our lives are so perfect, that it will not benefit from some corrections or even a major overhaul, the answer I guess you know.

Of course, individual changes are needed if we want to grow globally.

How the global is very affecting the individual, and it is very important to know that you start from the global one and end on an individual one; so the primary lesson here is that this square could bring about various revolts, because the energy of Pluto bears the need for the transformation, and on a global scale it will set out to demolish what was old and to rebuild and refurbish.

On the other hand, is the energy of Uranus where there was a pronounced need for liberties, so the square makes the collision of these energies that are bringing changes and transformations? And like everything, this could be beneficial or ruining.