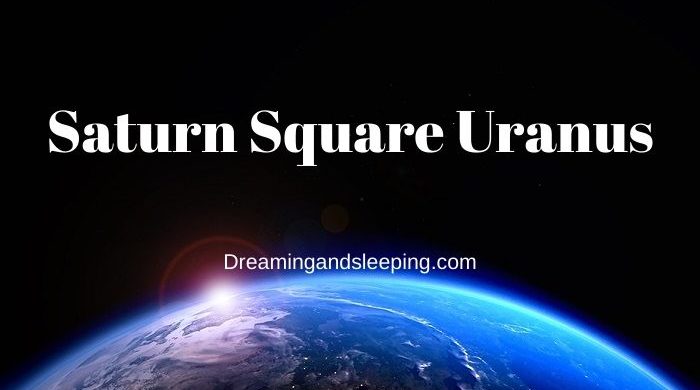 When a square position is formatted between the planet Saturn and Uranus, especially in the synastry, such a position brings a challenging, magnetic and intense attraction, with elements of individuality and independence.

In some sense, you cannot have one or the other, there is a lot of passion, that is almost unbearable, but there is also the need to be free and that the personal independence is not jeopardized.

The planet Uranus is not in accordance with social norms in any way, so people with this aspect (where the rigid Saturn is also close) cannot maintain a conventional relationship in any part of their lives, but we think that this is not such a bad thing.

Remember one more thing, the planet Uranus is the one that is able to free us from our daily routine, and there is nothing conventional about it.

In synastry (that takes our biggest interest here), this aspect indicates that one of the partners will always feel threatened in any relationship, as it will diminish spontaneity and romance in the relationship (once again we are telling you that it does not have to be a love relationship).

This is also the position that can make such a challenging life from those who have it, on an individual plan, but as we like to say, this is also one aspect that could provide the growth.

The square of Uranus and Saturn is very interesting both in a synastry and on a personal level when we look at the character of a certain person who has this position in his or her natal chart.

In synastry, it can have some benefits; since it can reduce the conservative approach of one of the partners, so you can look at this position as the one that speaks of two different people who make each other better than have been before that connection.

But, on an individual level, these people are encouraged to make radical changes in their relationship or to exhibit some extreme behavior; they will be so extreme that is beyond compare, and in this sense, they can be problematic. This aspect is an indicator of occasional conflicts and disputes over issues of responsibility and personal freedom of the partner. 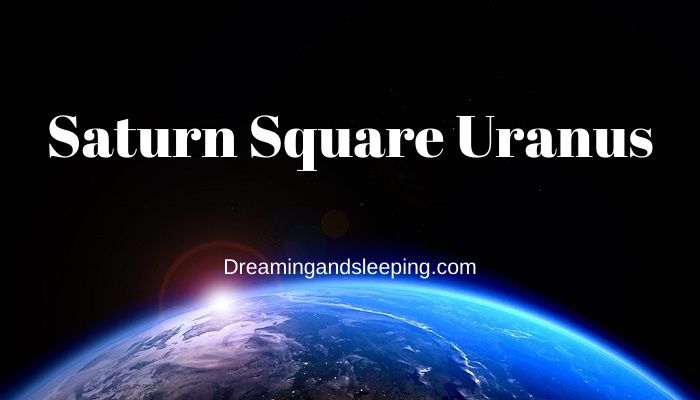 They may feel undisciplined, unreliable and endanger their security(along with the self-esteem), while they may feel restrained and restricted by their partner or someone who is beside them, it can be their partner, of a parent, maybe in some cases a boss.

Some of the famous people who have such an aspect are Paul Cézanne,

When we are talking about the good aspects of this “unfortunate” aspect, Saturn remains to be the social planet that is directed those who have it toward material security, and this is not a bad thing.

They will maintain a somewhat stability, and it comes in handy when they do not know what will they do with their excessive energy.

These are the people who suffer the longest and suffer the most, but we must say that such a combination of planets could have its good side because all of that pain has its purpose and meaning.

These are also the human beings that have to face the biggest constraints at the very beginning of life, but such events are that shape them for the future.

They do not have many friends, but those who they have are beside them for eternity, and all of this comes from the fact that that they often make difficult connections and difficult partnerships.

Even better, the growth of these people come after they have survived misunderstandings (they are those who have a hard time separating from home, whether they have struggled, trying to achieve their own independence, or have taken on the burden of caring for a family).

Now, the best part of this combination of planets, in a difficult position – they are the ones that will understand you whatever may be happening to you, and they are those who are seriously experiencing your pain – because they have been quietly surviving it themselves.

In some cases, such a combination could bring a lot of mental frustration, along with the fear of loss of security and family suffering.

Emotional, as well as family constraints, for these people, will cause later in life they need for control (discipline) over emotions, as well as a constant fear for safety (both emotional and existential – fear of hunger, fear of losing home).

Now, imagine how many pain they will endure, and how many “good” things they will miss out in life, just because they cannot relax and enjoy what they have, because of the fear of loss.

It is said, and this comes as a worry for all those who have this position – such a square bring these persons a kind of private, financial or family disaster.

There is no chance that some of this could miss them out, at least one of these things will occur in their lives. And often, one follows the other, and they find themselves in the vertigo of disasters so that a failure is inevitable.

They are often suffering injustice or emotional and financial hardship that disrupts the sense of security. The conflict between the need to change life from the root and the need to maintain a secure position will mark their lives, and now you can see how much hardship they have to endure.

At times, they find the worst possible time to change – you know that moment when they feel that they are about to change, but even here they can fail and choose the wrong moment.

It is in this aspect, in love matters and in synastry, Saturn and Uranus will help to tear down old and “accomplished models” and go into the process of individuation – we can be together, and we remain individuals.

Maybe this is the best solution for them. Otherwise, they cannot be happy.

When they fall in love so deeply, their life will somehow be deeply “shaken” and revived (awakened) from the root, so if the lover they are having is a good match for them, they can rebuild their “bad” lives.

It is under this aspect that people have the chance to use this unpleasant turmoil as an expression of the accumulated internal need to break with the current life course and start over.

Now, in synastry, when Saturn and Uranus are in question, three is great for changes that love brings, and such square can help in personal development and help everyone in directing the energy of thought.

It is the entire question about the personal horoscopes, but in any case, it is very important for everyone (in that love connection) on a personal level, depending on your natal home.

Also, when it comes to partnerships, or in synastry, we will not limit ourselves on love, these two planets announce the time of the great changes, and the love they are striving for, on an individual level becomes deeper and deeper until it comes to the surface when it can be concrete and visible.

On the one hand, in the square position of Uranus and Saturn, there are strong and distinctive emotions (fear, panic and hatred) and on the other, there is a need for awakening and awareness, liberation and unification.

In the time when this position is active, people come to the realization that they own one side and also the other, and Uranus brings very sudden and unpredictable events; it has no emotions and wakes up everything it touches.

This can be very difficult for us, and we always experience the touch of Uranus as stress, because it is not something that we can sense with our emotions, but there is a change that is happening, for sure.

People of this aspect, during the time when this aspect is occurring, could make a great success in some form of teamwork because of the planet Uranus always marks the entry of our collective (unconscious) into a new energy phase and always refers to the global changes in which we participate as individuals.

Have in mind that now is the time when you can make significant changes to the environment you are in, so it is advisable that the work is directed toward humanitarian or public work.

So, they can show an incredible work in the common goal, but the impact of this square is mostly seen in some global events, and those who have this position are part of them, more than others.

They describe the possibilities of us as individuals to be affected and to what extent these events and they are very interested in the world, and the global ideas.

In many cases, they are the ones that provoke crashes, revolutions, anarchy, the overthrow of the old, conservative and all established systems and at the subjective level the need for freedom, honesty, liberation, innovation, chaos, anarchy but also avant-garde, equality, humanism.

Uranus is a planet that requires us to wake up as humans and to bring in the newspapers that are necessary to develop us as individuals but socially and socially.

Saturn and Uranus are the time of the great changes that follow, and the symbolism is unpredictable, but the changes that are about to occur cannot be denied.

Often you can take them as a warning or as an announcement that for the next seven years there will be an unpleasant fear of the collective unconscious the possibility of activating some power.

This square position puts the possible focus of events of revolutions and disorder, especially for countries under the influence; it can bring great changes. Uranus is the planet that wakes us up.

If this awakening is uncomfortable and difficult – we must accept the consequences of what it brings – but also face the lessons it serves that are necessary for our development. And more than before.

In any case, here also, since Saturn and Uranus are in a “hard” position while this position occurs in the night sky, you will endure some hard times, there is no doubt about it, but, know one thing, sometimes it can bring a liberation and freedom that is necessary for all human beings on this planet, and it is what this world needs, in a global way.