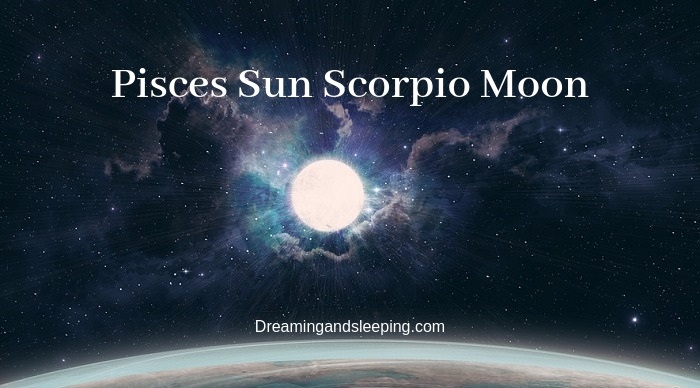 Astrology can be the one science that will provide you with the answers that are necessary for moving on in life, and making the right decisions since it is the science or a method that will give you specific answers to specific questions.

For a certain analyse you can have just two information – the locations of the Sun and Moon, or the luminaries as some like to call it.

Today we are speaking about one of the most mysterious luminary combinations of all, about the person who has Sun located in the Pisces signs and the Moon in the Scorpio sign.

The power of two natures in this combination reveals to others the unrest of the soul – this is the only person that can explore the human soul to a depth that not many will dare to try.

He often has prophetic, but realistic thoughts and many of people who are close to him like to listen what he has to say, cause often he makes good predictions of what will happen in near or close future.

In essence, this luminary combination gives a personality that does not fit into schemes, because everything in it is subjected to inner passion, which makes his actions and reactions often incomprehensible in the eyes of others, but quite justified in the light of its impulses. And her impulses are definitely not that will harm any other human being; on the contrary, this is the person who will help people in any way he can. He wants to see good in all around him.

Even the impressions of such persons are subject to unconscious and instinctive because they fall under the power of feelings and no reason – this is the person makes the majority of his decisions strictly by using his emotions.

You can always be sure that if he loves you, there is no doubt that those words come from an honest place.

Leaving at the mercy of the unconsciousness of the movements of consciousness and subconsciousness, this human being who has luminaries located in Pisces and Scorpio signs is constantly trying to reconcile what he is or think he is to what is surrounding him.

So where is the problem?

It occurs because this human being rarely succeeds because he is hindered by strong internal earthquakes that are exhausting and preventing the preservation of the lucidity necessary for his life in reality.

He wants to have spiritual fulfilment, but his emotions are suppressing him so that he cannot make the point where he is real enough, even when he is desperately trying to make it.

In the end, he falls into the vortex of emotions, confusion, pure chaos, and it spreads to its surroundings – no one wants to be in his environment when he is like this.

This is the person who has a tendency towards introspection, towards conscious research into the inner (emotional) labyrinth, reaches an enviable level in this connection.

He is, without a doubt a person who can love a lot, he has a restless nature, but problems occur when he is overwhelmed by his dreams, he is often defined with apparent opposites of the real and fabricated, torn between the rejection of supremacy and the desire to rise to the summit, this person is entrusted with strong feelings.

Not every lover can deal with such emotions and will be able to give them back in some way.

In love, a human being with the Sun and Moon located in Pisces and Scorpio signs is often inclined to secret, forbidden passionate affairs -and he does not give up from such affairs, even when he feels that is time to find some peace in love.

For some people who look at his life, everything may seem like a movie, but in some other times this person is very reclusive, and nothing happens in an emotional sense.

This person needs more tolerance and should try to build a more flexible relationship with his lovers.

It is the fact that he must take care of his sometimes masochistic behaviors in love that is putting him in the centre of the unsolvable conflicts and tangled situations.

The fact is that this human being who has luminaries located in Pisces and Scorpio sign is the very mysterious and secretive, and it is not very easy to get to know him.

Many hidden things lie hidden under the surface, and only a handful of partners, maybe even not them have a chance to find what these things are.

He acts as a very quiet, simple person, and in essence, he is an extremely complicated human being, far more sensitive than he shows, and if anyone, especially his lovers try to play him, he will never forget it, and surely will never forgive it.

When this human being loves it is the most intense feeling, he is drawn to other people by his strong, emotional, intuitive nature. He is extremely compassionate, gentle, but if emotions are not replicated, he gives up his lover easily.

In the end, we must say that this type of person is understood best though emotions, so if you know what he feels (but truly, not what he wants to show you, or convince that he feels).

His lovers must be aware of the fact that he has an immense desire to make progress, to overcome your own limitations, so he needs a lover who will follow his idea of growth.

Inner life and spiritual meaning are of great importance to him, but his lovers must be aware that with him they may experience extremes in behaviors as he is the supporter of the idea of “all or nothing.”

The fact is that this person will work the best in love with someone who is successful, financially well-off and much more peaceful partner because he constantly fights with his own ambitions and internal unrest.

He can even be a good match with someone who is a withdrawn, quiet, practical, but ambitious lover.

The most suitable lover is the one born in the Zodiac sign Cancer.

This loving couple is contemplated to be very corresponding, and for that reason, by unifying their common energies, it can function well in everyday life.

The Cancer lover shows the necessary trait of practicality and the enormous dose of the imagination of our candidate are united here and can contribute to the easier realisation of common life plans.

These sensual beings can often feel that in life, love, and anything else (the sky is the limit),  can easily succeed. This is one complementary love story that can last without much troubles and conflicts.

As a friend, besides his amazing traits like love and understanding, along with the support, this person with the luminaries located in Pisces and Scorpio can be contradictory in relations with other people.

He is very powerful, strong, but emotions are his main strength (he understands others well) and his main flaw (he can be easily hurt).

This is a person who feels, knows in advance, is ready for life, but often struggles between his emotional superiority that he has when looking for example among his friends.

So, he is not an easy going friend, but he has a lot to give as a human being, and the best case scenario is when he let to have his secrets and “secret life”; he is not the type of friend that will share everything with others.

In the end, one thing must be very clear – he will never forgive you if you hurt him, or if he forgives you, be sure that he did not forget it, and that he will make that clear when the first occasion presents itself.

He has a very restless nature surrounded by strong impressions, imagination, very intruding by choice of friends.

In the process of summary, we must speak of the nature of this human being who has Sun and Moon located in Pisces and Scorpio sign- his essence is hard to understand if viewed solely through the spectrometer of logic and a clear mind. As we have said, he can be understood only if you learn about his emotions.

As we have said, this type of Pisces is the most mysterious of all in the Zodiac – he sees the world that surrounds him and lives in an irrational and unexplained state.

Everything that surrounds this person is fascinating, even enchanting; and some astrologers say that he is truly endowed with the sixth sense and that he is able to understand deeper dimension in life.

On a more negative note, he is very prone to depression and paranoia, but at the same time, he is more than capable of looking at things and events from a positive side.

The only way this person can succeed in life is if he ultimately gives way to the impulses of his subconsciousness so that he could reach the knowledge of himself. He can do it, he has the will to do so, but he just needs time to settle with himself.

Although he often hides a very romantic feeling in himself, he is strong enough not to let it lead him -so only if he manages to overcome his “problems”, he can get great things in life.