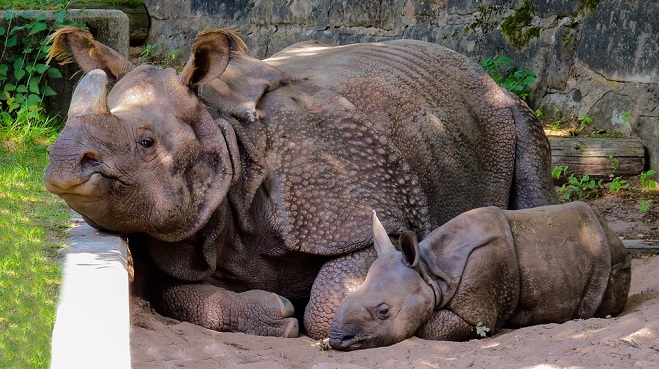 Rhinoceros are large mammals that inhabit the Asian and African continent. Their interesting appearance makes them look as they are coming directly from ancient history.

Rhinos are well-known for the horn they have in the front of their heads, but this has been their blessing and curse since many of them are still hunted because of it.

Gentleness – Even though rhinos are giant animals, they are very gentle and peaceful. These gentle giants rarely attack other animals and they usually spend their days eating herbs and plants.

Strength – Rhinos are strong animals that can weigh up to 5000lb and grow up to 11-15ft. even though they are not aggressive animals they can offer a decent fight once they are attacked.

Rhino as a totem

People born under this totem or protected by at are peaceful and steady personalities who know what they want in life and how to get it.

These people enjoy being alone with their thoughts without being pressured into anything. Rhinos in nature are usually a part of a smaller herd, so people born under this totem enjoy having only their good friends and family around them.

Life experience and things they go through is their biggest strength. They can endure almost anything in life and overcome every obstacle that shows up on their way.

People born under this totem are strong both physically and mentally. They usually take on a safe road in life and stay away from experimenting with their emotions and actions.

Being this way helps them create stabile and secured family life, without many outbursts into the unknown.

They truly love spending time with people who are close to them and sharing their deepest desires through heartfelt conversations.

One characteristic that can be both good and bad is that they can often times be deceptive. This means they can often appear as calm and nice people, but in reality they can be really dangerous if someone touches their nerve.

Rhino as a symbol in a dream

Dreams about rhinos are very often dreams, but when we do have them they can bring us both positive and negative news. If you had a dream about a rhino in general, then this dream represents an enemy in your life.

This person is trying to make your life a misery and you might not be aware of it yet.

If rhino in your dream crossed your path, then this dream means you are about to achieve something huge in your life.

This dream could be related to your career or your personal life, but either way luck will be on your side.

If rhino in your dream attacked you or was rushing towards you, then this dream represents problems in your life that are about to appear.

These problems will probably be related to your personal life. You might get into a fight with your partner or with someone else close to you.

Rhino as a symbol in different cultures

Rhinos have always been highly appreciated animals. This was partially because of the fact that their horns are considered to be materials of high value and extremely rare.

Since they inhabit the Asian and African continent, their symbolism was created by the civilizations that lived near them.

In ancient Asia, rhinos were a big part of the cultural heritage of the Chinese and other Asian cultures.

In China, there are two symbols in writing that are used to represent rhino as an animal. In art, rhinos have often been used as motives.

The earliest and one of the most impressive examples of this artistic expression is the bronze zun wine vessel in Shandong .

Another wine vessel from the 206BC was discovered in 1963 and this was one of the most realistic and lifelike examples of rhino art.

During the period of Zhou Dynasty rule, rhino’s skin was used to make armor. His hide wasn’t the only part of rhino that was considered to be valuable.

Rhino’s horns were believed to have special powers, especially when it comes to testing poison. When a drink would get poured into a rhino horn glass, the liquid inside would start to fizz.

This is why horn cups were used by royalty and considered to be one of the most valuable tests for poison in that time period.

Early models of these cups were find in China and they date back to 137-122BC.

Rhino horn wasn’t only used to make cups it was also used for making other objects like hair pins, bottles, dress toggles and many other things.

In Africa, rhino art is an essential part of the African cultural heritage. Rhino figurines and objects made out of rhino horns can often be found among archeological remains. Rhinos were also an important food source for the African people, but only the finest parts of the meat of the rhino were given to the chief and rhino horn was a symbol of a chief status.

Symbolism of this magnificent animal was highly important in civilizations that lived near it. The value that this animal had and still does is, sadly, shown by people’s desire to still hunt and kill this beautiful animal.