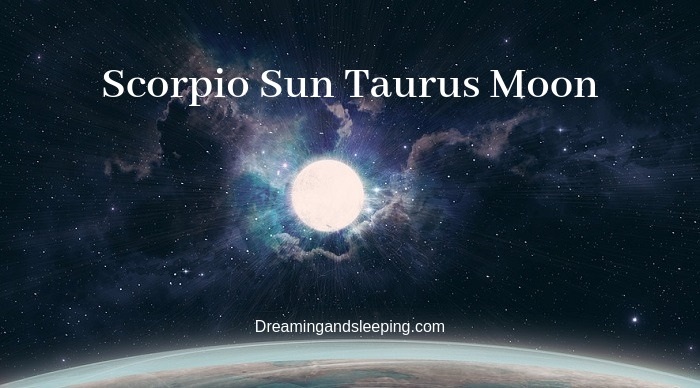 There is absolutely no doubt that the Astrology is very complex and expensive science, and it is understandable, having in mind that this was the science that developed for millenniums. Some even say that this is the transformative science, but the most fundamental postulate of Astrology is based on the 12 Zodiac signs.

And during the time, each symbol has developed its own links, like matching animal or color, stone, etc. that depicted its characteristics and it is believed that the person who was born during the rule of that sign has those traits. What we know now is that each sign possesses an individual approach to life, complete with powerful strengths and frustrating flaws.

And if we focus on the influence that comes from the luminaries, then we can learn more about the advantages and about the flaws.

Today we are focusing our attention on people who have Sun located in the Scorpio sign and the Moon in the Taurus sign.

We will tell you right now that is a somewhat “controversial” connection, where passion and strength are connected to the destruction and pain. Read about this interesting person.

Here we will start to speak about the good traits that are connected to this person; for starting this is the person who when decide to do something, none can talk about anything against it, since he is very stubborn.

When he moves into action, he is the one that is able to tilt everything in his path, removing those who create disturbances. Such strength is rarely seen in people, and he has it, nothing can disturb his way to success.

In fact, this is the person who is lead by the need to confirm himself in life, love and work. And if others do not believe in him, he just becomes more stubborn.

In the core of his being, this is the person who is lead by the self-defense principle, and the one that has luminaries located in Scorpio and Taurus sign is ready to do everything to ensure security in the area that belongs to him, and he believes that so many things belong to him.

But where there is such strength, there must be problems, so he is the one that is passionate, possessive and jealous, and always concerned about defending his material interests –  on the long run, he has a problem in adjusting his destructive pulsations.

This is explained by the fact that with the still primitive, primal character that brings the Moon located in the Taurus, which is guided by elementary passions, and the other side of this story, we can see the complex and restless spirit that is brought by the Sun in the Scorpio sign.

So the problem occurs at the moment when these two contrast each other and yet they have secret complicity in common -so for this human being, everything can be the best or the worst.

He is the person, who has a tendency to possess things, and the other side to subtraction, spending part of its time in destroying what has been created -for example, he is the person who can work hard for something, and then destroy it for nothing.

So, this is a complex and powerful person, endowed with insolent will, often incomprehensible to others; they cannot understand the core of his being and in many times this is the person who is misunderstood and seen as the opportunist who will walk on the dead to achieve his goals.

This astrological combination is all about sensual life, and the Sun in Scorpio brings passion, but the Moon in the Taurus emphasises his sensual life.

In him, the love feelings are awesome, intense, and persistent – he loves so strongly that it is unbelievable; and in his love life, there is almost always a struggle between his desires and a reality, between the pulse to live, who is powerful and who demands, and the pulse for death and destruction. We are not saying that this person is ready to kill his lovers, but he is so intense that sometimes it seems that he is able to do such things.

And when it comes to his emotions, his instinct is often the winner of his intellect, and many people fall in love in him since he seems like he is the person who has a lot of hidden power and energy.

He likes to compete for the love that he believes that he deserves, and he often wins this battle since he has magnetism in him – he is able to seduce and go as far as possible to get what he wants from people. Some people are drawn to such attitude in love, so he has no problem in finding lovers.

We have already said that the person who has Sun and Moon located in the Scorpio and Taurus is the one that is oriented toward materialism and possessiveness, and he is like this in love also, maybe even more.

He wants to be in charge of his lovers and to give it everything, but there is a little room for freedom and independence.

It can be said that a person has a need for certainty (security in every sense of that word) and that when he loves; he has a strong feeling that it is only his.

This is a very passionate person who finds the most important in a relationship is, in fact, the sexuality, but the personality itself is very irresistible, which is persistently pursuing its goals. His lovers fall in love with these traits since he is usually seen as the person who is extremely successful and incredibly attractive.

So, as you were able to see, this is the person who is a little complicated personality, but he is also a person with a strong spirit, senses, energy, and survival power (this is the most interesting part, since lovers usually see this as one trait that they want their partner to have).

Feelings are extremely strong, and this person simply cannot imagine life without the people he likes and loved ones -and regardless of his independence, he wants to be loved. Deep inside this person want to show his vulnerability and to bare his soul.

However, at first glance,  the one with the luminaries located in the Scorpio and Taurus sign can act dissimilarly and rebelliously, phlegmatically, but also uninterested, it is a person who has a high degree of sensitivity, but also a tolerance that is expressed in professional contacts.

He will be the best match for the people who are calmer and simpler since this person is otherwise dominant in emotional relationships.

This place belongs to the Capricorn Zodiac sign -Such a combination of characters in love gives one love connection that is in a very nice way simple and natural. The Capricorn lover will give this slowness and calmness in this way, so the passion of our candidate can be suppressed to the normal level.

In addition, both partners, in this Astrological connection are very protective in terms of what contributes to the strengthening and stability of this connection. Generally, they have great chances for success and longevity of the association.

He is a handful person, the very complex one, and in life, you are either with him, or against him, and he will show you this clearly.  But if you are his friend, he will protect you and love you unconditionally.

But, sometimes, it happens that his “negative” part prevails and then he feels a strong need to move in the other direction, to be misled, persuaded, even to evil. And not many friends will deal with this issue in a good way, so this is the way he is pushing them from him.

The major problem also in friendly relations is his tendency to dominate his own possessiveness. But the friends cannot be possessed, so this person must realise that his personal development depends to a large extent on people with whom he shares his life.

They will help him to be constructive and evolve, but they can also stop him from destroying himself.

In this Astrological combination, where The Sun in the Scorpio (the Water) connects to The Moon in the Taurus sign (the Earth), and this person is then defined by the great stubbornness, and therefore great passion.

He is the one that can be overwhelmed with his sexual aggressiveness and overwhelmed by the great desire for discouragement, sensitive to his instinctive pulsation and wanting to meet the simple sensual fulfillment. He is a relatively peaceful but rarely restrained person, and his life oscillates between joy and the pain of life.

This is one person who is inspired by the dreams, he is in love with nature and tormented by the inevitability of living, accepting what it requires, it will at the same time make maximum use of its passage in life, and in that time he will gain everything that he wants, and will collect, cause he likes the feeling when thing belongs to him.

His life is filled with questions about the existence, and he lives intensively, where his life is reflected in ongoing activities, and filled with obligations.

In the end, this is the person that must empty out the excess of his energy and his feelings in the struggle to overcome the difficulties of achieving the ideas he believes in, refusing all the time to recognise the imperfection of his body and his weakness as a human being.