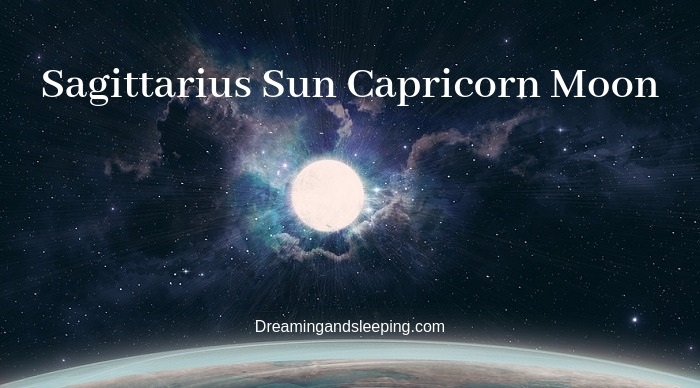 Even in the early stages of the Astrology development (and sciences that are related to it, or represents the early version of it), people who dealt with it came to the conclusion that humans who are born at the distinct time of year, when the planets, Sun and Moon are in a certain position in the sky, had plenty in common.

Of course, we know that every person is unique, but people who belong to the same Zodiac sign truly have something in common, like the same interests and feelings. This enabled Astrologers to create personal horoscope for individual people – the natal chart seen as the picture of the sky at the time, date, and place where the person was born.

The first position that the Astrologer will take a look is the position of the Sun and then the location of the Moon, as the two most important aspects.

In this case, we are looking into the world of the person who has luminaries located in the Sagittarius and Capricorn signs.

This is not the person who is inclined to dream or nonchalance in his behavior, and this type is a brave fighter when he realises his ambitions that are always present. He sees his way more as a path to be crossed than as a series of moments that he needs to live in as intensely as possible.

Thus he builds his present as a function of the future he is yet to create, whether it is a career or his development as an individual.

He defines life’s choices according to the criteria of its time and rarely happens to re-examine socially recognised values -he complied with them, and they suit him. However, this is the person who often expresses the desire to perfect those criteria in order to improve his and others’ fate.

In fact, we could say that he is motivated by an ambition to contribute actively to collective life; and he has an ideal that will become a magnetic pole of his life, allowing him to face the world around and overcoming the greatest difficulties in life. In all of this time, this human being does not forget to work tirelessly on his inner development.

This human being is focused on success, on gaining authority, conscientiousness, and he feels the need to testify to the concrete results of his efforts. He is blessed with organisational skills and the power to have the most complicated business projects in the palm of his hand – it is important for him to achieve success on the material plane.

For the human being who has Sun and Moon located in Sagittarius and Capricorn sign the most valuable thing in life is to have a good reputation and in some way to be better than everyone else, but of course, such a course of events is not always possible, and he needs to be aware of this fact.

Sometimes his stubbornness does not let him look far from his own nose, and this attitude is deadly for any development.

For this human being regardless of his strength and independence in life, sometimes he finds it easier to come through life with the support of a loved one or a friend.

These are the times when he wants to show how vulnerable he is, and at times he can be so believable in the role of victim, even if he is far from it in reality.

Having support in life is one thing, but gaining success in life by playing a victim is something else, and the funny part is that he does not need this, he is completely capable in succeeding alone.

What an interesting attitude in love this person has – a person who has Sun and Moon located in Sagittarius and Capricorn has an irresistible, almost childish need for emotions, but also a constant fear that someone will abuse it.

This fear is so common for all people who have Moon located in the Capricorn sign, and things get even worse since he is not able to show his emotions at all times, or he confuses his lovers with mixed signals.

He is dignified, and will rarely promise something if he is not able to promise and keep that promise, and this is out of the question if the person in question is his lover.

When he wants something, and he wants it deeply when that thing he wants is a lover, he is patient and persistent but can be overly unilateral, almost overly disciplined, and therefore seem as reserved and cold. But his heart craves warmth and someone who will be his support when needed.

As we all know by now, the main characteristic of all people who have Sun located in Sagittarius sign is their openness and ability to love like no one else.

But this type, with the Moon in Capricorn sign, is more rigid than expected, or he shows that he is rigid even if he is not in essence. And the time that a lover will spend to reach his core is long and not many people will have the strength to deal with it.

The sure thing is that he is not able to show his feelings and when he does, after a while, in his relationship his actions are directed to some conservative values.

But, one more thing needs to be said, and maybe it is the most important aspect of this story – this human being can truly love that his love surely can move mountains.

When in a relationship that completes him, he is able to overcome various troubles and problems through his back, but never particularly complain to anyone. He sees this as his obligation in love, and he acts accordingly.

The individual who has Sun and Moon located in the Sagittarius and Capricorn signs can boast at an emotional level on which he knows what he wants- and the bottom line is that he wants safety and stability. In reality, that means that he wants to be loved in long relationships and possibly marriage.

He enjoys relationships that are protective and closed for the public in some way but chooses a person who loves a family and who is willing to cherish the same values.

He needs a lover who will be happy with a happy family and a lot of children. All of this could be found in one Zodiac sign – the Pisces. This is one of the most patient and emotional Zodiac signs, and he has everything that is necessary for this person.

In the case of such a combination of Zodiac signs in a love relationship, there can be a strong mutual inspiration and great support – the things that are necessary for both lovers as the air they breathe.

The Sagittarius Capricorn person is grounded in some way, and he is able to support the emotional Pisces, and in return, the Pisces lover will help him ease in the real world and properly direct his emotions (open them), so this combination, is very good and beneficial to both partners.

Although occasionally sceptic and closed person, as a friend he can be amazing. He is one friend that wants to know all about you, but at the same time he does not like to reveal anything about himself, and he may seem like a person who is overly nostalgic, and prone to melancholy.

He is the friend that will help others selflessly, and he will give them faith and work on their inner progress.

He knows he’s listening to others and is inclined to absorb everything he’s interested in, and the lives of his friends are on the top of this list. Even in times when his friends want to hide something from him, be sure that he will find out eventually and use it when needed.

But on the other side of this story, he does not interfere with things that do not concern him. He has a dominant attitude in relation to friends and general with the environment and will do anything to keep them like that.

In this connection of the luminaries we meet a person who is aware of his own value, and this nature encourages hard and persistent work, in the end, to gain the support and recognition of other people. In the majority of cases, he reaches this destination.

Common sense dominates this person’s nature, and indeed he represents the great power that he exerts on other people, but also on himself, knowingly managing passions (the Sun in the Sagittarius) and ambitions (the Moon in the Capricorn).

One thing that we haven’t mentioned, and it is ok to say it now, in summary, is that in the life of this person there is a philosophical or religious attitude and a sense of inescapable fate that encourages self-esteem, showing a critical attitude in relation to their thoughts and actions.

Only if it is possible for him to establish a spiritual harmony, he will be able to subordinate his ambitions only to one goal.