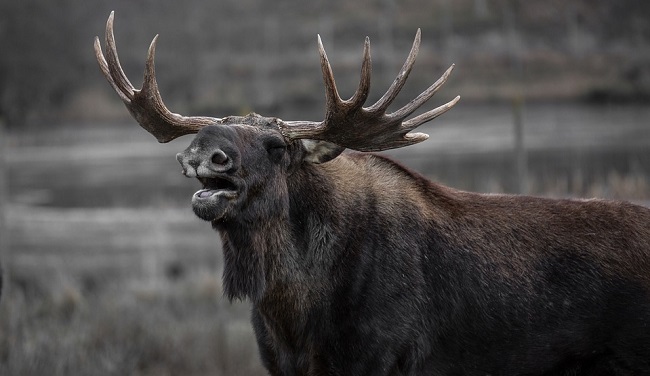 Since its native to North America, it has a strong symbolism and meaning for people who lived there throughout history.

His symbolism and strong symbolic meaning might surprise you, but if we mention totems, then you will probably know what we are talking about.

As an animal, moose doesn’t fall into the category of strong or dangerous animals. They are usually good natured and most of them live near people because the boundaries of their natural habitat have shifted.

In the Native American symbolism, moose is known as a large animal. They are usually six feet tall and they weigh a lot. Male moose have antlers that can be several feet long and they use it mostly for fighting with other male moose, especially during the mating season.

Even though they are not dangerous and bad tempered, they can be frightening and very defensive when it comes to their children. They will protect their babies with all the strength they have and if they are really in danger, moose can be as dangerous as a bear.

Since they are very large, moose don’t have many natural predators. They spend their lives searching for fields and water and keep their babies safe. They have an excellent endurance and they are great swimmers, so they can sometimes go extreme lengths to find food and water.

Now that we know more about moose as an animal, we will focus more on the symbolic meaning behind this animal.

Gentle – these animals are extremely peaceful and calm. They spend their lives living near people and attacks on people are very rare, almost none existent. They are not bad tempered and this is the main trait connected to the moose. In Native American Astrology, moose is a symbol for a kind and generous person, someone who is good with people and very emphatic. 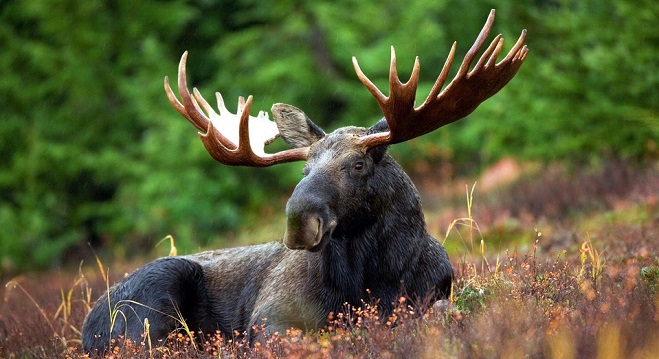 If moose is your animal totem, then you are probably very patient and loving towards your friends and family, but to strangers as well.

Strong – This is another trait connected to moose. Even though they are gentle and loving, this doesn’t mean they can’t be strong as well. They are very large and their constitution is scary enough by itself. They are tall and weigh hundreds of pounds. Natural predators are certainly not their problem. When attacked, moose’s can become extremely dangerous and with those long antlers it will scare away any predator.

Dominating – Moose is very dominating in its own surroundings. Because of its size, not many animals get a chance to find food in the areas where moose live. They require a lot of grass and water, and since they inhabit rough areas where food is hard to find, they need to get by in any way possible.

Powerful – Even though they are gentle and loving creatures, they don’t always act that way, especially if they are attacked by another animal. They know how to defend themselves and use strength if needed. Due to their size and large appearance, many perceive moose as extremely powerful and strong animals.

Courageous – Even though moose are strong and powerful, sometimes predators like bears can do real damage to them. This is why they are very courageous when they are defending their young or when they get directly attacked by predators. They will embark into a fight against a larger animal or more dangerous one, even though there is a big chance they will lose. This is why their courage is one of the most important traits and one that helps them survive in nature.

Fast – Their large constitution and long antlers, don’t stop them from being fast. They can run very fast, considering their weight and height and they can escape their predators by simply running away from them. They are very athletic and this definitely helps them survive even the toughest terrain.

Enduring – Moose are extremely enduring. They can survive a long time without food and water, until they find it. Areas where they live are very rough and most animals would extinct because of tough living conditions. Moose travel great distances to find food and water and this can often be hard and exhausting. They also need to take care of their babies and protect them from predators, while they are searching for food and shelter. Winter often gets rough in the north, so they need to survive extreme minus temperatures and wait for sunnier days.

Communal – Moose travel in groups and they don’t get separated. This is partly because they help each other out and also to protect the herd from natural predators. When they are migrating to another area, they all travel together and this is why group connection is another important trait associated with moose.

Graceful – Moose is a very graceful animal. When they are walking around in a safe area, their walk resembles a horse walk and they are never jumping or running around. Their large stature and long antlers, give a somewhat, royal appearance to this amazing animal, and this is why they are considered to be graceful and peaceful animals.

Adaptive – Moose is very adaptive, simply because it needs to be. They need to be adaptive in order to survive extreme life conditions in the north and lack of food and water. When abundance of food disappears, moose need to adapt to new living conditions and find food however they can. This usually ends up as a damp and dry grass meal that can be found underneath the snow, but they easily adapt to this because survival is primer.

Moose as a totem

In Native American history, totems are guardian animals and every person has its own totem. They protect us and main traits of these animals are usually found in people they protect.

Moose is a totem in Native American Astrology and its symbolism is strength and power. People who have this totem are very strong and agile. They can endure extreme conditions and come up stronger than they were before.

Nothing can get in their way, and when it’s needed, these people can fight against their problems with strength that not many of us have.

People with a moose totem carry themselves with a certain grace and elegance, just like moose carries its antlers on its head. They are graceful in their actions and their speech and they follow rules of behavior strictly. They rarely get into fights, and if they do, it will be only to defend themselves.

This totem also symbolizes motherhood. Female moose are extremely protective of their young ones and they will fight even a bigger animal in order to protect them. They travel in group which means that people with this totem give a lot of significance to socializing and other people.

People with a moose totem are very protective of others as well, and this is why they are usually doctors, social workers or police officers. They love sharing with the community and helping others in every way possible.

People with the moose totem are very balanced people. They know when it is appropriate to be strong and powerful and when you only need a nice word or gentle approach. They don’t get into discussions and their primary goal in life is family and well-being of their loved ones and other people around them.

They use their wisdom to help others find sense in the world and they are not selfish to share it. When it comes to negative traits of this totem, they can be a little bit stubborn and unwilling to accept other people’s opinion.

They are confident beyond the border and they can sometimes be a little bit arrogant in their behavior. This is mainly because other people perceive them as arrogant, due to their graceful and royal stature. They expect a lot from life and they will go great lengths in order to achieve that.

Moose as a totem represents wisdom of the elders, so people with this totem have extreme wisdom and outlook on life that if unusual for their age.

They are more serious and balanced than others of their age. They accept serious life situations more easily than others because they know that this is just a normal cycle of life that need to happen. As a totem, moose is extremely powerful and everyone blessed with this totem is definitely worth having in your life.