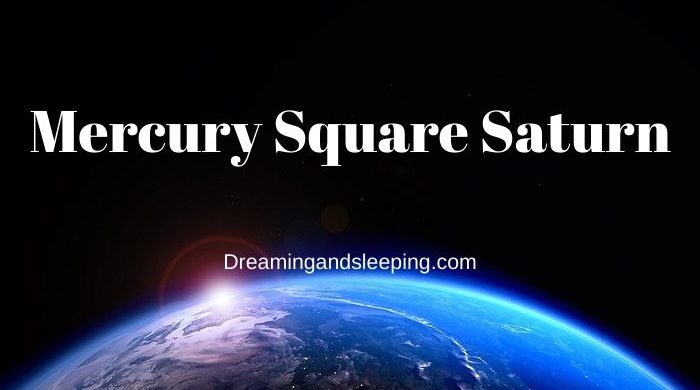 Astrological symbolism is amazing in a sense that every planet represents something else, and when those planets are combined in aspects, and then you get something even different.

Here, the two connected planets are Mercury that comes as a symbol of our process of reasoning, teaching and corresponding knowledge.

It can also show how you perceive your environment and what is your chosen way of communication in that society, especially the close one.

On the other hand, in this square position, we see the planet Saturn that comes as the symbol of “things” in their substance design and their restraint, but also the necessary balance and time that is in the center of the attention.

Now, as you know by now, the square aspect in the natal chart is the place where these two planets meet or cross.

Astrologers say that these two planets they encounter at one cross-section, where they have arrived going at the same pace in diverse directions.

In some way, astrologers like to point out that these are the two planets meet in one place, and not one of them will take the advantage, which produces a mass of tremendous latent power that, if not released could make a mess that will have a long term consequences.

There is no doubt that this is one aspect that provides powerful intellect and above all memory that is beyond compare, and people who have this aspect are precise and well-organized human beings who often like to speak about things that are very serious, but their attitude toward life is often very pessimistic. They do not believe that the good will defeat the evil and love conquers all.

They are also rigid in some way, and it is very hard to make them believe in something they do not want, they do not like to modify prevailing thought. 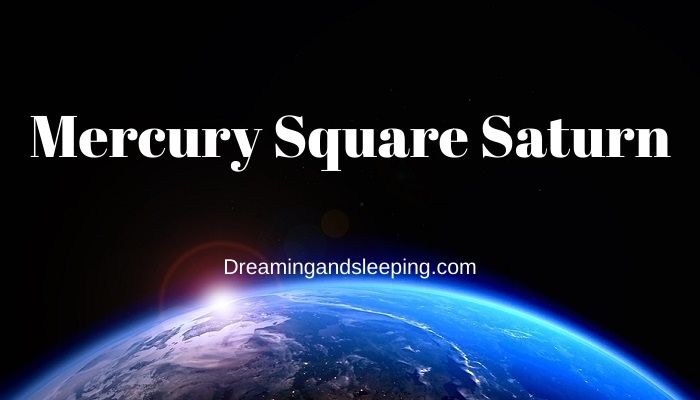 In some way, they can be very difficult as friends since they want proofs and proofs, and many are not willing to show them, especially in interpersonal relations.

For many, they are not the people who can easily be understood, since they can be too abstract to be understood, but whatever they do, they will do it perfectly, or they will not do it at all.

They are the people, who have substantial nature, and they do not want to fall under some bad impact – they are not always willing to accept things that are new, because they more believe in something that is already proven. But they will rather do things in their own way, and do not like to change their beliefs.

They are the people who are grounded and do not suffer from pronounced ego, but they also believe that they are the creators of their own destiny.

As every square position, here also we can see bad traits in the personalities of people who have this position in their natal charts, but regardless of how bad they can be, they cannot decrease their rational potential, and the best results are achieved when they are able to focus and fully commit to something.

Also, we have to speak of some negative traits that are present in this square, as expected –  even if they are hiding it, they can be skeptics, pessimists, and are prone to overthinking things to the point where it loses every meaning.

What others may say about those who have this square position in their natal charts is that they are not funny people and they bring some form of sincerity and doubt into all, and they cannot relax so easily. They feel that they are born with some debt and that they deserve to be unhappy.

When they are focused, they do things so perfectly, and they are not leaving anything to luck, but in reality, this is not something that will always bring good results.

We have to say that this position of Mercury and Saturn bring a mighty (and even unhealthy) relationship with the past, and instead of reaching the future, they live in the past.

The best advice for them is to learn something from the past, leaving the sentiment behind, and carrying the experience with them.

You have known this also about this square position – here Mercury that is the ruler of the words and mind is in a bad aspect with the planet Saturn that is depicted with the sadness, anxiety, pressure – so, in reality, they are the people who are constantly worrying.

Often they are those who are complaining about everything, that they feel making their lives hard, and at times they are not doing anything to make something better.

These people usually look at the world from a pessimistic point of view, and it only increases the embarrassment and the production of dark ideas.

The fact is that the Saturn that is heavy makes such a powerful burden on the planet Mercury that refocuses thought and mind into the darkness, and worry. So, it is not hard to guess why their lives often have so many unwanted conditions and stressful events.

If we want to look at the interpersonal relations and if we want to create synastry analyses regarding this square position, people with this aspect are prone to reacting overly circumspect; they take a lot of things with restraint, and they are not lovers that you would want, at least at first glance.

They often feel that they are under a major burden and that they deserve to suffer in love, which truly leads them to some peculiar and saddening moments.

Maybe the problem in this square lies in the fact that these people are most essentially motivated by logic, not by feeling, and they must know all circumstances before they make some move in love.

But, on the other side of this story, they are also those who are capable of being solid partners in marriage, since they can stay those who support that family and who know how to behave in difficult times. Usually, they work great when the pressure is high. And what is even better is the fact that they are able to defend their beliefs and their lovers to the core.

They are suitable for those who love to talk about some serious issues, who like long talks and do not look at the life superficially.

People who belong to this aspect are often most suitable to some jobs that need perfection and accuracy – this perspective hinders the ability of rational processes of the brain, so these characters are great in science.

You can often hear them speak of some tough issues during the discussion, and they are those who are very persuasive and have in mind here that the planet Saturn is the one that is very serious, and responsible.

They are people who are the best and most loyal workers. You will never see them waste anyone’s time on something that is not related to work, and they love to interlace insignificant issues such as diplomacies or any political issues.

Often they find true recognition when they are older, and they are aware of this fact. At times they choose jobs that traditional, where they can show how hardworking and ambitious they truly are.

In some way, if they want to succeed in some work, they must overcome their suspicious nature or a feeling of insecurity. Still, this is a great aspect of management or policy, if they want to choose it as their occupation.

What these people must know is that they have to constantly be in some sort of balance because they cannot always make smart judgments, they think slowly and delay decisions, and above all, they are those that lack confidence and belief in their own power of reasoning.

So, the best way you can understand this position is that here the mind is under many boundaries and that energy that is present cannot move fast, and it is under restriction.

So, this aspect could bring for so many of us a new way of communication that is equally important and irrelevant at the same time.

Maybe all of us should use an ability that comes from the Saturn, one that gives a clear focus – you can do so many things correctly.

The advice for all of us is to take the priority in your life and to focus your energy to right things that spark your interest, and the need for diversity and fortitude by stating it could be clearly focused and dedicated to a priority topic.

Some of us will have a feeling that you are under the major burden under stress – try to undue pressure on its essential nature and provide resistance.

If you are not able to do so, it will result in insufficient freedom and speed of movement that is not suitable for what you want to do. This leads to the creation of the difficult thoughts that will not go away so easily, so keep this idea on your mind.

Some of us will feel that we are struggling to follow some regularity, and it is not in Mercury’s nature to follow the rules, but rather he likes to twist and catch curves when it comes to rules.

Some simply do not tolerate this, and it is very difficult for them in this situation. If you feel like it, follow your true nature to curiously wandering on all sides, and when the times are right, you can focus on one thing only – find ways to get out of this inconvenient situation.

Whatever we give you like a piece of advice you must follow your true nature, or you will stick in something ah not even you could understand properly.