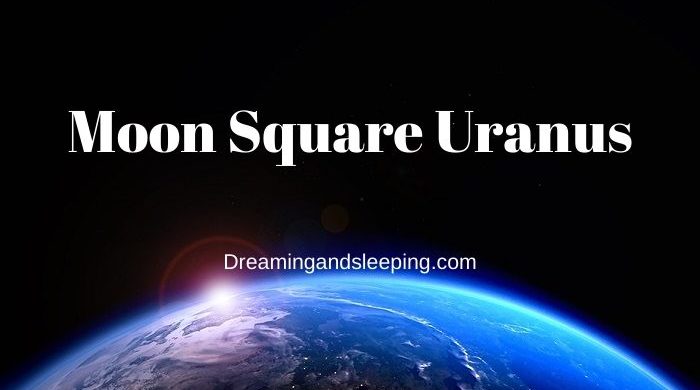 This is one planetary position that will be truly interesting to look at since this we want to examine it in the Synastry, or as we want to say it is simply, in the comparative horoscope (with a lover).

So, why is this square position so interesting? Because in it, there is a Moon, that is in the natal chart connected to our emotions, how we react to things around us, our mother and relationship with her, our growing up, and on the other side of the square, we get to see the planet Uranus, the one that speaks of our uniqueness, ingenuity, rebelliousness, things that are revolutionary.

If you combine these two into something that is conflicted, then what you get?

When we know that the square position is the one that shows stress, tension, lesson learning, but it is even more interesting when it is connected to the Moon and Uranus.

Right away, we will tell you that this square position indicates rebelliousness, fighters for freedom, ingenuity and authenticity.

People who have this combination have all the above characteristics, and they are such strong people that their tension can create such good things.

We must add that in this case also you must know that planets do not alter their nature of manifestation according to the sign of the Zodiac they are in that current moment.

The Moon is always the Moon that represents emotions, and it cannot represent society, friends. Here it is all about the connection with the Uranus and what it represents when it is found in a difficult position. 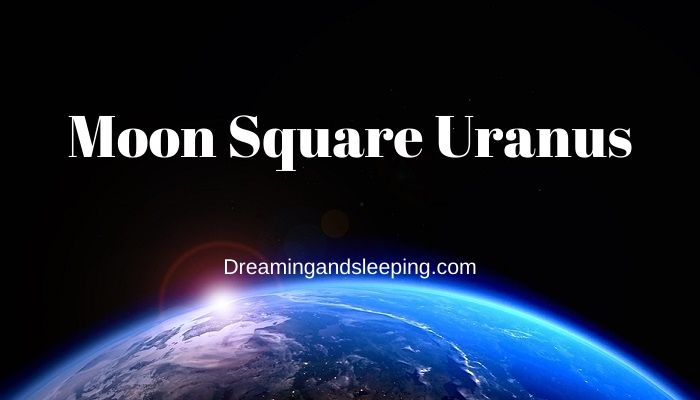 If the Moon and Uranus receive harmonious aspects indicating that these individuals will have no fear of bonding with others, they will also quickly realize that they have freedom within themselves and that no one can take away from them.

So, this need to be free, and not to bond with others, is seen in a good light, they are able to come to that self-discovery and learn the ultimate truth about them.

Their biggest fear is that they will lose some of their freedom, of authenticity, but many of them are able to find the key for survival, and not just survival but progress.

The key here is to find freedom within them and to understand that no one can deprive them of their authenticity and freedom – if they start building their lives from this perspective, they can build everything in their lives and be truly happy.

Much depends on their environment, and the fact do they have or not support to be free and unique.

Some of the people who have this position will become amazing parents that are very unconventional and friendlier with children then some others.

In some negative way, this is the square that seemingly deprives people who have it of their freedom, and it is really important for them to know to release all those fears and find strength, as well as to realize that no one can deprive them of their freedom and uniqueness.

This aspect, on the other side, could give people who are in some ways afraid to bond, which are different and loves freedom. In some cases, they are so free that they are leaving their families and children.

These people are afraid to bind because they think they will lose their freedom and their authenticity.

The square between the Moon and Uranus gives a person a kind of anxiety in their psychic mindset, and they can be tormented by the suppressed feelings that may have and that they did not deal when the time was right to do so.

Some of their tensions could come from childhood even if they feel cheerful and restless, but a certain tension could come, and they will feel nervous, tense, which is later passed on all aspects of life.

An aspect of the square between Moon and Uranus can bring the challenge of personal ideas and individuality by family, but in some negative way, this combination indicates that these individuals can react abruptly to the things that happen around them and will become unrecognizable.

They are always authentic in society, and they do not care if they behave according to the rules, which are why they do not have so many friends, but everyone knows them.

Also, this aspect can lead to problems with authority/superiors (father, boss, etc.), and many of their talents will never be fully developed.

Now to the main matter in this piece – Love. When it comes to the square position that is created between the Moon and Uranus can lead to sudden mood swings and sudden reactions if they feel someone wants to control them. And since they are very stubborn and like their freedom, they usually find lovers who do not trust them and want to control them.

So, the best match for them is the one that will never control them, or at least not in such a visible way.

From time to time, emotional disappointments can occur in their lives; a person’s soul is excited, and they are always looking for a backstory in their lovers because they can be very emotionally unstable.

In love, in some general ways, we must say that this square brings about unexpected situations that cause relationships to break even though it has all but seemed to promise – it may seem that something is perfect and that love is no matter, but in the end, it breaks in a million pieces.

People who have this position are emotional, and there is no doubt about it, but they can also suffer because Uranus is unique and directs them to stay that way, not to change for anyone.

Advice for all those who have this aspect is that they never let to be overwhelmed by emotional turbulence, falls, but also valuable loving experiences that remain as images that are remembered and leave an unusual emotional impulse.

If we go a bit deeper, and if a person with this aspect has some others that are not favorable, in that case, he or she will seem like a cold, reserved, focused on social interaction, ideas, humanism, but these are still emotions (even if they cannot show it when it comes to the interpersonal connection).

They are not comfortable talking about emotions, so these people are better able to cope in an unfamiliar environment -many of them have casual sex and do not love long-term connections.

They are uncomfortable with showing emotions because it means vulnerability and possible dependence on others’ reactions.

When it comes to work matters and this square position, we must say that even if they are blessed with many talents, people of this aspect know to ruin their careers because they know to be capricious, unpredictable, eccentric, and especially intuitive with something that they do not like.

They work well when they are able to encourage others to be independent and in return, expect complete freedom from others, in this case, from bosses and co-workers.

The nature of this aspect will seek to escape into independence that causes indifference to others’ emotions – when it comes to working, there is no room for sentiment, and this is their mantra. And they do it very successfully, and only if they are allowed to work independently, even if it is not good from the perspective of others, the results they will show are amazing.

Positive in this aspect is the innate talent for many things, the innate obdurate feelings that will be love, versatility, but also the study of sciences in which one can be guided by intuition and feelings.

But, all of this does not mean anything if they are not able to commit since they are addicted to change and constant events.

Sometimes they create pressure and tension on their own, constantly knowing that he is responding quickly.

They know to be cynical and hate to have authorities, so it is the best if they work outside of the team.

It is interesting how they do not want to be bosses, but oftentimes they do become, and they are in conflict with so many others, who want those positions.

The Moon in the square on Uranus represents an aspect of tension, sensitivity and unexpected changes.

The Moon symbolizes the subconscious, emotions, mood, while Uranus is associated with innovation, unconventionality and transformation.

The implementation of new ideas and impulsive reactions should be avoided during this transition of the Moon and Uranus, and it is advisable for all of us to know that this square does not last very long, but all of us could feel it. It is reflected through unpredictability, difficult focus and unexpected, sudden events.

Advice for all those who have this aspect in their natal chart is that they need to maintain family stability, they need a creative partner, and they need to find a valve for their tension.

Active expression of free will can lead to tension and unpredictable emotions, so all of us should take care of ourselves in the first place. Because of the need to express our free will at any cost, we may come into conflict with other characters, which is why we can react unpredictably. Mood swings (unpredictability of emotions) are possible during this time.

If this transit is active, all of us would be hard to voice our own opinion or idea out loud because we are too concerned about how the environment will react.

People with this aspect often know how to be stubborn, impulsive and emotionally unstable. The Moon in this aspect “views” Uranus as a planet of conflict, struggle, all kinds of confusion and embarrassment.

The Moon in the square on Uranus reflects all the sudden changes, reversals, as well as extreme mood swings. The Moon in a square on Uranus symbolizes an aspect that is emotionally unstable, and it is manifested through strong variability, as Uranus and the Moon attract everything that is not unusual and new but lasts for a short time.

Very often, this aspect can bring about hasty and wrong actions that manifest naturally in the life of the people who have this position. Because it reflects instability, the Moon in the Uranus square exposes a person to great stress and emotional breakdown.

Its activity happens over a period of time, so new ideas or projects are often short-lived or unsuccessful, but they could/should be used as lessons for the future, so that same mistakes do not occur again.

In Synastry, the Moon in the Square on Uranus is an indicator of conflict and lack of understanding among partners, but it is still not a relationship that does not last, on the contrary.

Harmonious relationships become more and more inconsistent over time, followed by a sudden break in partnership, and this does not have to just a part of your love life.

It will probably come as something that is not expected, but it will be painful. And the good thing that we could learn from it is that maybe that painful break is for the best. The time will show.