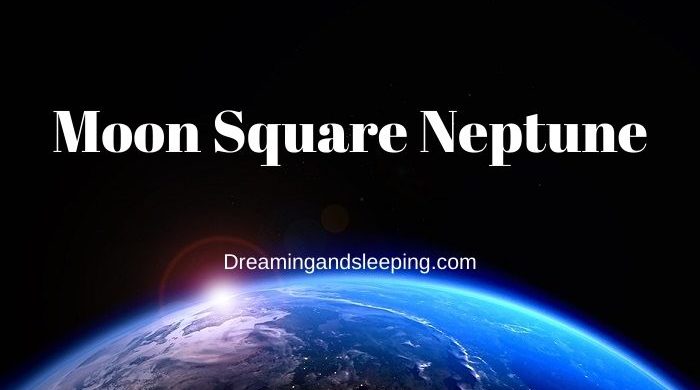 It is very interesting to look at this planetary position since both planets that are here are so amazing and difficult by it, and you can imagine the difficulty that comes with this hard position.

We are talking about the square position that is formatted between Moon and Neptune, and the difficulty or challenge is even more serious in synastry because the Moon and Neptune both tackle in the world of imagination, dreams, vision, emotions and everything that comes with it.

These two create one boundary, and it is the one that is created between the insanity and ideals, and you can imagine where this can go, in what direction.

The square position that is created between the Moon and the planet Neptune in some general way speaks about the loss of contact with oneself, the over-idealism and uncertainty that results from it.

On the one hand, a person tries to understand and experience spirituality, while on the other; it scares her, making her insecure.

People who have this aspect in their natal charts are often not so sure that they live real life or that they are dreaming of something, there are that blurred lines that are making their lives hard.

Of course, on the other side, this is the aspect that gives imagination, creativity and some spiritual depth, and if such energy (even though pain) is directed in a right way, it can give birth to the people who can change the world (or lives).

Some astrologers claim that this square position represents the horror of the soul and the anxiety of the mind in which only dream and desire have a purpose. 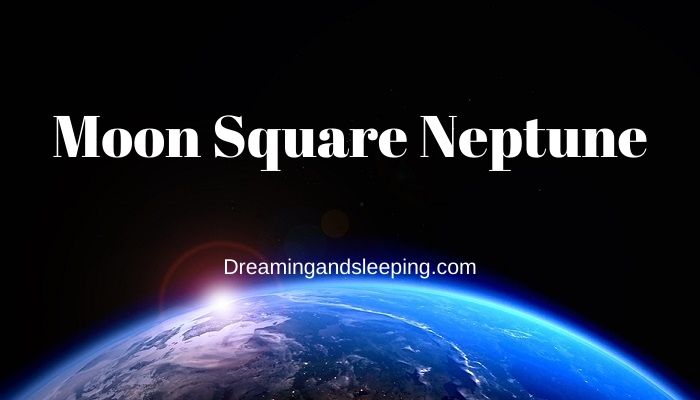 The Moon in the natal chart, in some general way, describes our sensations, and connections that we have in life, while on the other side of the Square we can see the planet Neptune that symbolizes holiness, spirituality, intuition, empathy, unreality, divine love above all borders.

In some positive light, we can say that this square position does not have to be as hard as you think, and when there are some another aspect favorable, then people with this aspect can make an easier and quicker insight into themselves and their emotions.

In this case, there will be no major disappointments and the person will clearly be able to see who is using it and who is not.

Again, since this square aspect is non-harmonious, it indicates that in the first part of life there will be a problem of clearly seeing things around them, as well as a problem of separating others’ emotions from their own.

These individuals are sensitive, tender, and they love to help. They tend to idealize people and things, but they often exaggerate, and are so unrealistic when they do it, but is a hoy listening to them how they find a shred of beauty in all people.

Because of the traits that Neptune and the Moon carry “on their own”, and when they are positioned in the hard aspect, then it occurs that they are not sure in what is real and what is not.

Often, they wonder “did I have this dream or is it something that I have experienced?” At times, they may seem disconnected from their bodies or imperceptible to other people.

In some extreme cases, people who have this position may have unexplained fears (for example form calm or deep water, because it is a symbolism of Neptune).

In other cases, they have a fear of losing consciousness, so these individuals often do not have a normal sleep, and they lose so much because they do not rest as they should.

Emotionally, they have even bigger problems since here Neptune is in connection with the Moon that brings emotions, and it is very hard to endure this.

So much suffering is present here, and those who have this position in their natal charts, or when this Square is found in the synastry suffer a lot because they cannot understand the world at all times; they are those who are hurt in love connections, and the damage that is created does not go away so easily.

The Moon and the planet Neptune, in synastry, in particular, create very often the ideal that it has is too heavy for their emotional state.

This aspect can be given to them since the ideal of Neptune is used practically and under controlled conditions, which is the goal of the Moon, who wants to keep it safe. If it were a sextile of the Moon, it would probably give the actors since they have no problem switching from one reality to another.

People with Moon and Neptune square are especially sensitive to the external energy, they are not able to get along with just right about anyone, and for someone to be their lover, it is a truly a special task.

They may have a fear of the unknown people, of not having enough space when they are already in some connection, or any relationship for that matter.

But, we must also mention one peculiarity that relates to this position – it indicates a pronounced naivety and a tendency to escape from reality, so you will find in many cases, people who are not able to have “normal” connections with others, but will rather opt for “imaginary” ones.

People have a problem clearly seeing their emotions and themselves, and in love matters, such inability makes love a mission impossible.

If they are in love, they may become even more fearful (that they will lose the person they love), even more sensitive, gentle, delicate, and it take just one bad word, and they will break to a million pieces.

Since Square can make the worst out of both plants, do not be surprised, if the people who belong to this aspect escape from their love problems in the most extreme way – they are solving problems with running away from alcohol, drugs, etc.

In synastry, and we see this as the most important part of this piece because the true nature of a certain position is best seen when it is related to other natal charts (and aspect), this aspect indicates the problem of separating from other people’s emotions, which is very difficult for a person to solve, and for the sensitive one even harder.

They emerge into their lover’s feelings that in the end, they do not know what they feel and what their lover.

In reality, this means that they can be so sensitive and willing to submerge into their partner’s life that they do not see clearly things around them, so they are often victims of deception and exploitation. This Square points to the problem of alcohol, drugs and other addictions, due to disappointment and deception, especially from their lovers.

To end this in a brighter tone, we will say that the key solution is that those who find themselves in this square position, to devote themselves to spiritual and pure activities that will clear their minds and create their soul.

Only in that way, they will be able to receive love as their fragile hearts are able to love tenderly and lovingly.

As we have said, because creativity and imagination are so developed in these people, it is truly important for them to direct their imagination and talents, as well as ideals and sensitivity, because it is the only way to make they feel safe.

Also, their ideas should be directed to work and structure, to practical work, and in this sense, it is a good suggestion for them to focus on travel, education, meditation, philosophy and applies their talents in these areas, but without any emotional attachment to an idea.

The Square is a perspective formed between two planets that express stress, tension, anxiety and lesson learning method – in these people, memory and brain functions are very sensitive.

These are people who may have artistic talents but are afraid to show them to others. They do not like criticism and condemnation because it violates their ideals by making them insecure – they work the best when they are praised, and rarely criticized.

Let us give the advice that all of us could use in some way, and you do not need to be an expert to connect the dots; just have in mind what does the Moon represents and what Neptune represents, and you start to connect all that you need to know when these two objects are connected in the square position.

This is the time when you will not know what are you doing, and if you have any questions or something is unclear to you, now is not the time to find out the answers to those worries.

This is the moment where there is one line that you want to cross bit you do not know how to it.

What kind of variance is present here and what does it mean for all of us, and especially to those who have this position in their natal charts? I can be materialized as a kind of willlnessness, then sensitivity to every little thing, too emotional nature in all fields, so easily others can hurt you, then not to mention poor health, sensitivity to changing weather.

Then this aspect speaks of economic instability, along with the numerous fears that follow such state; so be careful that you do not lose things that you have worked so hard to achieve.

Extra attention during this transit would not be a bad idea, and maybe some time dedicated to meditation is also a piece of good advice.

On the other side, maybe it is a good time to use this position to try to find out what lies deep inside people who are close to you, and why not, to learn more about your secretive world.