Eagle is an animal that has always had a special position when it comes to symbolism, in many cultures around the world. We can even see eagle symbols today, that is represented in many different ways, but somehow it is always a symbol of great strength and wisdom.

Eagles have been used as totems and spirit animals for centuries, by cultures all around the globe. The strength behind this animal is something undeniable.

To learn more about the origin and symbolism of this magnificent animal, keep on reading.

Even though it might sound odd to you, that we incorporated earthly and biological characteristics of an eagle in this article, it is actually very important to learn more about an animal in order to understand the origin of symbolism behind it.

We will list few of the most important characteristics of an eagle, so that you can connect them to the symbolism later on in this article.

Great sight – Eagles are well-known for their great eye sight. They can spot their prey from a long distance, and storm down on it in few seconds. Great vision helps eagles to survive and feed their young, because they are limited, and also most powerful, when they are in the sky.

Speed – Eagles are also very fast when they are capturing their prey. They storm from the sky in only few seconds in order to capture it. Their enormous wings are responsible for this magnificent trait, and without them, eagles wouldn’t be able to stun us with their flight.

Vicious – Even though eagles are not our enemies, they are known to be vicious in the animal kingdom. Since their only source of food is on the ground, and they spend most of their lives above it, they need to be vicious and capture everything they can and while they can. They usually prey on smaller animal but larger mammals are also an option, if nothing else is nearby.

Strength – Eagles need to be strong in order to rip their prey and feed their young ones with it. They also need to carry their prey away from other predators and protect what they have captured. With their strong claws, eagles are able to lift up, even larger mammals and carry them up into the sky to the desired place. 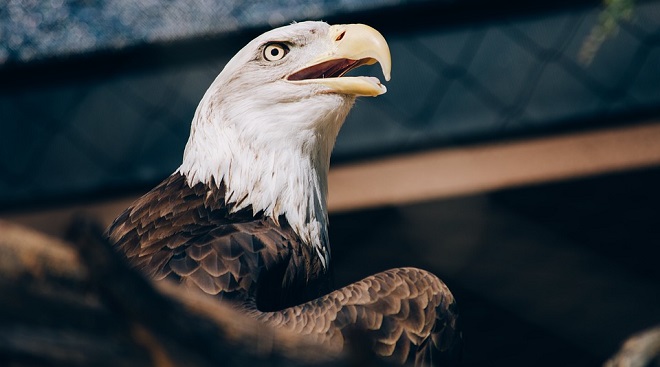 Now that we have learned more about some earthly characteristics of an eagle, we will focus more on the spiritual and symbolic meaning, that lies behind this magnificent animal.

Eagle as a totem

Totem could be considered to be our guardian animal or an animal that best represents our personal traits and characteristics. Just like zodiac signs reflect our personalities, totems are a great way to represents person’s character through the beauty of an animal.

People born under this totem are people who are free. When we say free, we think about the freedom of spirit and everything that represents a certain person. This freedom can be noticed by the way a person behaves in his everyday life.

This is a person who won’t let others control them and make them into passive observers. These people love travelling and meeting new people. They enjoy being tied to nothing and no one, spending their lives wondering what they will encounter next in their great journey called life.

They are people who don’t like spending too much time in one spot or in one place, and their nature and restless spirit drives them to explore and learn more. This can be a problem when it comes to forming a relationship with others.

These people will come into your life and leave just the way they got in, suddenly and without explanation. If you met someone born under this totem, then you shouldn’t take their freedom as a flaw but as a part of their charm and accept them the way they are.

Another characteristic of people born under the eagle totem is mission. Even though these people seem to wonder in life without a purpose, it is likely that they actually have a goal or a plan set up. Everything they did or everything they will do, has some kind of purpose that will come to the light later on in life. The reason why they are wondering is to find this goal and make it a reality.

People born under the eagle totem are also visionaries. They are people who see life in a completely different way than most people, and ordinary and mundane things will not keep them interested at all. They are more into great ideas and great adventures in life, than they are into living life from day to day.

They are usually scientists or inventors, artists and creative geniuses with a vision to change the world as we know it.

People born under this totem are also strong. Their strength lies both in their mind and in their body, and they are not easily seduced by someone’s ideas or visions. They are resistant to outside influences, and they are built that way in order to protect their own missions in life.

Overall, vision and great spiritualism lies behind the symbol of an eagle, which is exactly why it has been one of the most powerful spiritual signs throughout history.

Eagle as a symbol in a dream

Eagle has also a very powerful symbolism in our dreams. Depending on the situation and other symbols in our dream, dreams about eagles can have different interpretations.

If you had a dream about an eagle circling above you in the sky, then this dream is a representation of a confrontation you are about to get into with someone who is close to you. This confrontation will be a result of a spontaneous conversation that will turn into something more serious.

If you had a dream about an eagle in flight, then this dream is a representation of freedom and peace you are about to experience in your life. the upcoming period will be filled with joy and happiness, that will be the result of your hard work and dedication but also a fruit of love, the others have been giving you.

Dream about killing an eagle is a dream that represents your strength. You are a person who is determined and you know exactly what you want in life and how to achieve it.

Dreams about eagle’s nest are a symbolic representation of meaningful connections you will form with other people. These people could be your co-workers or people you are about to meet, who can change your career completely. You should keep your eyes and mind open for new opportunities that are waiting for you.

Dream about flying on eagle’s back is a dream that represents an upcoming trip or adventure you will go to. This is something that you needed in your life and now it is finally going to become true. Make sure you use this opportunity to grow and expand your horizons, and don’t miss out on this great chance to make your dreams come true.

Dream about an eagle in your house is a representation of improvement of your living standard. Wealth and prosperity is coming your way and you won’t be able to believe the amount of luck you are about to have in life.

As a symbol in different cultures, eagle has appeared often. There are ancient artifacts and stone carvings and sculptures, that indicate the power of this animal when it comes to symbolic meaning.

Native Americans saw eagle and bald Eagle as sacred animals. They were representations of wisdom and bravery but also they were messenger to the Spirit realm. Their feathers were used in sacred rituals and even today we can find remains of statues and sculptures made out of wood, that have eagles carved on them.

In Celtic culture, eagles were associated with three Gods. Celts valued and considered trees to be sacred, so all of the animals that lived inside trees were considered to be sacred as well. In Celtic culture, eagle represented strength and leadership but also authority and security. Eagle symbols were used in sacred ceremonies and prayers to the Gods. Intelligence was one of the most important traits linked to this symbolic animal, and Celts used the symbol of an eagle when they needed answers, from the Gods, to the questions about the earth they didn’t understand.

In Mayan culture, eagle is one of the Zodiac signs that is a representation of people who like to be free. They are free spirits and they can’t be tied to one place and one person. Their imagination and creativity has no boundaries, and they represented great visionaries and geniuses of that era.

In ancient Egypt, eagle was a symbol of wisdom because, his wings flew him higher than people and therefore he was able to see the world from a far greater perspective than humans did.

Eagles today are being used as a symbol more often than any other animal on the planet.

In Feng Shui, eagle images should be placed on the north and east parts of our home, in order to bring good luck and love into our family. Images of eagles bring good luck for our business and career, so we should place them in our offices too.

Many countries around the world have eagles as symbols of their nations and they have been used in heraldry for centuries.

In the United States of America, bald eagle has been declared as national bird so we can see images and symbols of this animal on various national emblems and flags. Marine Corps, Postal Service, Defense Department, Justice Department , Navy and President seals and flags all have a symbol of an bald eagle on them. This only shows how big of an importance the eagle symbol has for the US.

Other countries of the world that have incorporated eagle symbols in their national flags and emblems are Austria, Mexico, Albania, Poland, Serbia, Ukraine and many more.

In the end, symbolic meaning of this magnificent animal has not only been appreciated throughout history but it is still appreciated by many nations and cultures all around the world. His wisdom, strength and visionary symbolism have been, and will continue to be, one of the most powerful symbolisms in this world.