Jaguars are magnificent and powerful animals that inhabit our planet. They are a pure representation of strength and power, and we can pick up this energy by only looking at a jaguar up close.

There is something so powerful in this animal, that makes people instantly afraid and amazed at the same time. Jaguars have played an important role in many human cultures and many nations used a symbol of a jaguar as a sign of power and authority.

Jaguars are also very popular symbols today, and people still recognize their power even now. When appearing in dreams, jaguars can have a strong meaning as well, so knowing the symbolism behind your dream can be helpful.

If you are interested to find out more about this beautiful animal and the secret symbolism behind it, then keep on reading.

Strength – Jaguars are extremely strong. They can grow up big and weigh up to several hundred pounds. They are impressive when you are looking at them in the distance, and up close they are even more terrifying. They can strangle their prey with their strong jaws and swallow a smaller mammal in seconds.

Beauty – Jaguars fur is something many people have been longing for. Softness of its fur and the beauty of colors, that can vary, is mesmerizing. There is also something elegant and sleek about the way a jaguar walks. This feline moves smoothly but efficiently when he spots his prey.

These are just few of many characteristics of this amazing animal, but we will stick with these two and move on to the fun part of the article, and that is the symbolism behind a jaguar.

Jaguar as a totem

If you are someone who is born under this totem , then you are a person of great power. You have an aura around you that makes other people feel intimidated but also impressed at the same time. When you walk into the room everyone’s eyes lock up on you and they simply can’t look away. 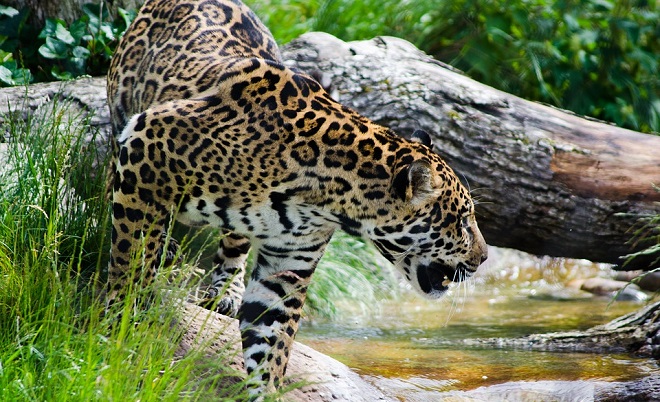 This power can be your strong suit but also it can cause you a lot of problems in life. If you use this power in the wrong way, you are risking of losing everything and everyone, so make sure you apply this powerful trait only when it is necessary and to the right people. if you do so, many great things will be in front of you.

If your guardian animal is jaguar or if your totem animal is jaguar, then you are also very strong. This strength is not only present in your body but also in your mind. Nothing and no one can make you change your mind, if you are set up to do something and make something happen.

This trait is an extremely positive one, especially if you channel it to something productive. Other people will come to you for advice and look up to your example in life. The strength of character you poses is something of a great value, so don’t waste it on wrong things.

You are also a person of great courage. No task or goal is too big for you or too dangerous for you. You grab life with both hands and make the best of each day. Big risks don’t scare you and nothing can make you stand back and relax, if your goal isn’t met.

This courage can lead you to great things in life that can bring you a lot of fame and success, but also love from other people. you are not only brave when it comes to your problems, you are also brave for others.

This leads us to another trait of a person born under jaguar totem, and that is protection. You are the protector of those who are weak or who can’t take care of themselves or stand up for themselves. Injustice deeply hurts you and you will never stand back and watch something unjust go without a punishment.

People born under this totem are also influential. You r charisma lets you lead on a great number of people and you can make them believe almost everything you say. Like I mentioned earlier, others look up to your example and follow it without thinking twice.

This kind of great power should also be handled with care, because it can harm not only you but also a great number of other people who love and trust you.

In the end, people born under the jaguar totem are magical. There is something special about these people and not everyone can achieve what they can in life. There is a force far greater than anything on this world, that drives these people in life and makes them be as special as they are.

Jaguar as a symbol in a dream

Jaguars can be very significant symbols in a dream. They can carry deep and profound symbolism and warn about events that are going to take place.

If you saw a jaguar up close, then this dream represents a warning that someone is going to harm you or make you do something you don’t want to do. This person could be someone from your work or someone who you considered to be your friend. They will definitely try to sabotage you and make you pay for something you haven’t done, so be careful and keep things to yourself.

If a jaguar in your dream was close to your face, then this means you going to experience some major problems in your life. These problems could be of a personal nature, and you are going to have to solve them as soon as possible.

Dream about petting a jaguar, is a representation of your personality. You are someone who likes pleasing people and rarely confronts them about things. This habit of yours is especially bad for you, because you won’t be able to handle that much stress and anxiety, that is going to bottle up inside you after a while. Talking to other people about things that are bothering you and fixing relationships, is the only way you can be happy and help others.

Dreams about jaguar attacking you are a representation of a conflict you are about to experience. This conflict could possibly be with someone who is your superior, like your boss, and consequences of this conflict could be great. Be careful not to do anything irrational and weigh in your moves before you take them.

Jaguar as a symbol in different cultures

Jaguar has a very strong symbolism behind him and many cultures around the globe recognized the amount of power and strength this animal carried.

In Peru, Mexico and in the whole pre-Columbian America, jaguars were considered as gods. Mayans and Aztecs worshiped jaguars and in the divine line, jaguar was in the second place just behind snakes. These cultures built huge temples to honor jaguars, and one of these temples is located in Chichen Itza.

Mayans also believed that jaguars were rulers of the Underworld. They both feared and worshiped jaguars, and believed in their great powers. Aztecs also built temples devoted to jaguars, that can be found even today. These temples contain statues and engravings with jaguar images and symbols.

Mayorna people see themselves as the Jaguar people. They even tattoo their face with lines, to resemble the ones on a jaguar. Their priests are considered to be the most powerful when they reach the state of jaguar. A priest who reaches this state is considered to be highly influential for the community. This is a good representation of how big of a meaning a jaguar had for the people of South America.

Jaguar was a representation of power, strength and courage. This symbolism was recognized even by the Romans, who linked this powerful animal to their god Bacchus. In Greek mythology this god was named Dionysus.

Bacchus was raised by jaguars and in one of the myths it is mentioned that, Bacchus entered the city on a large chariot that was pulled by jaguars or large cats, as it was depicted in the myth. Bacchus was the god of wine and mirth, but he was also seen as god of secret desires or unleashing of them. With this being said, jaguar was a representation of hidden urges and desires that remain hidden underneath this powerful appearance.

Today, jaguars are still portrayed as powerful and strong as they were considered to be few centuries back. People now tattoo images of jaguars on their bodies as a representation of a strong mind, powerful personality or simply as an expression of secret desires.

A popular brand of cars also carries this name, and it is currently one of the most expensive and high end brands on the market. In literature, jaguar as still portrayed as vicious but also well respected animals. One beloved cartoon character comes to mind when we think about jaguars, and that is Bagheera from The Jungle Book.

This character might be a perfect representation of a jaguar. Even though it is strong and powerful, he is also the protector of the forest and an animal to be respected by others.

There is simply something mystical and mysterious behind this animal, that captured people’s attention for centuries. Whether this is jaguar’s strength or they simply feared this animal, we will never know, but it was probably a combination of the two.