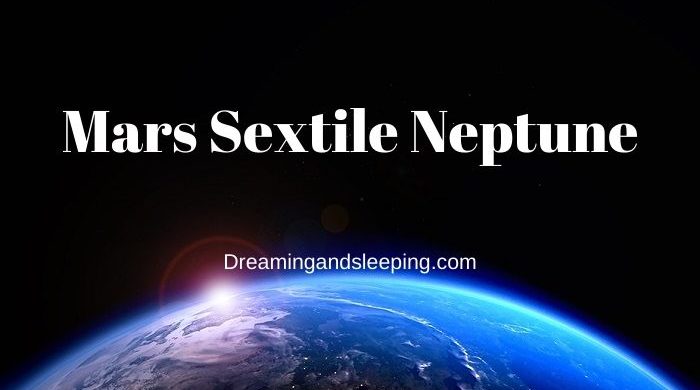 The sextile position in the natal chart could be the most underrated aspect that we know since it usually does not last long and it is not as strong as some others, but it falls under the category of positive aspects, and here the two planets that are in this position are Mars and Neptune.

Maybe it seems to you, with your basic knowledge about plants and astrology that these two could not be combined in some positive way, but we assure you that such thing is possible (naturally if other aspects in natal are “good”).

We know that Mars has a driving strength that is leading all the way, and here this fighting spirit is present in the aspect of the sextile, where it collaborates with Neptune, which symbolizes dreams, intuition and creativity that not many other planets give.

The sextile is an aspect between two planets in a horoscope that support and sustain one another, and the question is, could these two, almost oppositional planets support each other?

How can these two work together well? In a sextile position, of course, read how.

Mars is such a planet that always strives to reach its destination in the shortest, almost a straight way, with the high speed and power, always seeing only one path, because it is only one, and on the other side of this sextile we get to see a planet Neptune that is opposite of this.

This is the planet that sees at least three ways at the same time that it could reach its destination, and even then it creates additional ones that make things even more complicated than before.

Mars is at the beginning of the horoscope as it is the ruling planet of the sign Aries, while Neptune ends it with its rule in the sign of Pisces.

Here, you can see how, on some other way, planets could work together well. 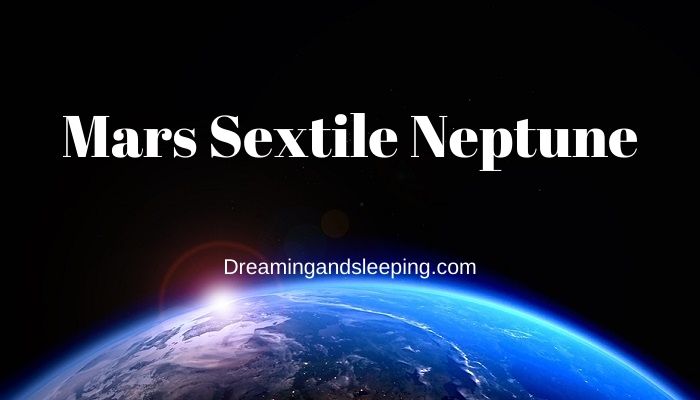 In this sextile, we get to see a wonderful opportunity to move towards the pursuit of our dreams by cultivating creativity and choosing the most efficient paths to our destination (there is not so lost time, and then it could be with this dosage of imagination and creativity).

These people are blessed with this opportunity, and in the best possible way, they are able to know what they want or desire and the shortest way how to get there.

In this case, where Mars and Neptune are drawn to work together so that they produce the best, we have one form of cooperation even if these two are objectively different in nature.

But this kind of cooperation is necessary in order for the two planets to be able to do their best in the process because they act on each other in a stimulating way.

When these two come together, people get the action that is applied to the imagination, thus triggering the productive process (that gives tangible results).

Thus, with the help of Neptune, Mars is no longer one-sided and meticulous, but is directed to the elaboration of particular ideas and begins to look at things from multiple angles, while Neptune with Mars’s assistance is not rinsed to too many sides, but directs his imagination in a clearly defined direction.

If you want it simply – such imagination and creativity are well focused.

These people are very creative since there is a help of the associated symbolism of Mars and Neptune in harmony with one another creates works with a spirit that encourage and motivate other people.

If you know that Mars is naturally impatient, hectic, direct, focused, eager to deliver results here and now (without any wait) and that Neptune is patient, indirect, scattered, foggy, and forward-looking, so it expects results at some future time, what is the character of this people? Are they confused at times?

They are, and this connection can be very difficult to achieve, so there are so many challenges that are in front of them all the time.

We said that this sextile brings potential, but we did not say that there is not going to be any hard work.

So for example, if Mars decide everything on its own, people who have this aspect will behave in a hurried, one-sided, one-of-a-kind manner and will, therefore, have to go through a long process of learning and gaining experience (a lot of pain is included).

If Neptune takes its prime, these people will make people dream more, then it is healthy, reality will fade away, so everything will remain on that, and again the goal will be far away.

So, balance is the key, and if other aspects are positive, then this sextile could really bring so much good in the picture.

Love takes the important place for all those who have this sextile in their charts, because when Mars and Neptune work well together, then there cannot be any place for insincerity and insincere feelings – everything is open, honest and direct.

Nothing can be hidden when these people are in question, and any insincerity can be revealed, they want to open up to their lovers.

Mars is directed to mysticism, the spiritual abilities, along with the desire to help someone specifically, and even we know that these two planetary objects are so different in everything, they can create particularly good energy, so people who have this aspect have specific charm.

The fact that spirituality is a part of their personality just means that they want to have that spiritual connection with someone, rather than just sexual.

In the case of this sextile, both Mars and Neptune are able to stimulate and assist each other, enabling people who have this aspect of initiating their creative abilities and beginning the creative process with all the necessary elements.

These people are able to live such lives that their inner imagination and the need to pursue our dreams (Neptune) with a strong enough motivation and specifically focused activity (Mars) leads them to something that goes beyond mere desire and needs to achieve a goal.

It does not matter what they do, these people are able to follow their path, and what this sextile does it allows them to understand the value of the path that leads to the goal, because in this case they are not following a logical plan and sequence, but are in a creative process wherein the very creation of what they want to achieve they get to see something new and more efficient.

They work in a way that they give new methods and elements, which they come to with the help of intuition and imagination, and which they implement into the whole process.

They do not have to be artists, but everything they do, even if this is some small and insignificant job, they will do it just like they are creating an art piece.

If they find their dream job, they are able to improve their skills and efficiency and to reach such a success that it is beyond compare; they are able to win on quality and self-confidence, and what they accomplish attracts the attention of others.

In the Sextile between Mars and Neptune, we get to see one practical dreamer, the one that can use his positive energy, and when you know that this transit energy is active, and then it is the time to get what you have been wanting.

There is a force (Mars), but slowly and subtly (Neptune) leads you toward the realization of your dream, with some creativity, imagination and intuition (Neptune) easier to reach a goal (Mars).

Just being imaginative is never enough, it is just a good basis, and when this ability is directed and focused, and then results cannot be missed out.

Here, people who have this aspect are much more flexible, more patient, and yet strong enough to do what they want.

So, use this transit in the best possible way, since this is the great time to push toward the realization of your dreams since now you can trust your instincts, intuition.

With greater sensitivity and imagination, you may also find yourself in need of help; and the energy that comes from the planet. Mars could be used for a higher goal, whatever that may be for you.

In this sextile active energy from Mars is carried in a dreamy soul, and the goal is to release energy in an imaginative and creative way, mystical, and spiritual.

The advice is to slow down and enjoy the beauty of the world, take a break and do what you like.

This is also a good time to be in nature; in the end, it is possible with this aspect to escape from reality, on the wings of the imagination. This is the time for self-evaluation and self-care, do not let anyone stole it from you.

In the end, have one thing in mind when it comes to this aspect – with it you do not need words to do something, you have that primal energy that comes from the planet Mars, and imagination that comes from Neptune, and we will tell you that this is the winning combination.

The time is now to fulfill some fantasies, and it is a time for romance, strong emotional and physical needs.