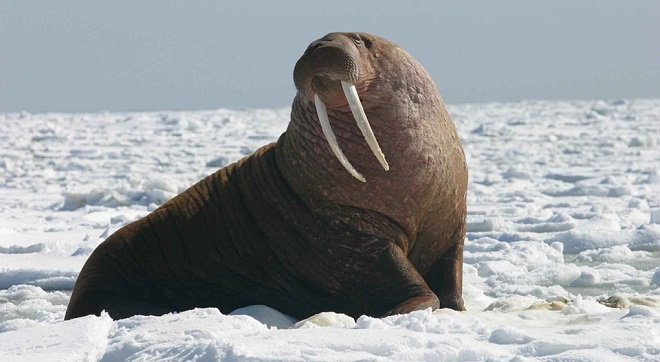 Walruses are large, loving creatures that inhabit the North Pole and Arctic Ocean. These large mammals are easily recognizable for their large teeth that can grow up to one meter in length.

Walruses have been an important part in cultures of the civilizations that lived in these northern parts of the world.

Since ancient times, walrus symbolism remained the same and it hasn’t evolved too much over the years.

Calm – Walruses are usually calm animals, they rarely attack other animals or people.

They only attack when their territory is endangered or when they are protecting their young.

Territorial – Like I mentioned above, the only reason (besides being attacked) for a walrus to attack or become aggressive, is when his territory is in danger.

They usually pick one place and spend most of their time there, so when someone tries to take this away from them, they become very unpleasant.

Walrus as a totem

People born under this totem or protected by it are gentle giants. They always take care of others and make them feel good.

If someone is in trouble, especially someone close to them, they leave everything behind and go to help a friend in need.

This makes them perfect partners and friends, so everyone who has this person in their life is considered to be a rich person.

People protected by this totem are also very compliant. This can be considered as their flaw sometimes, since they miss out on lot of opportunities in life because of this

. Instead of always being compliant and listening to others, they should be out conquering the world with their warm hearts.

Kindness in their hearts is mesmerizing. Everyone around them can feel this positive energy and gain confidence from it.

They will always be with you in your time of need and offer you a helping hand. If you have this person in your world then you make sure to keep it by your side.

Walrus totem symbolizes social behavior or the love of being surrounded by others of the same kind.

This fills them with energy and desire to move forward in life. If they didn’t have the support of others they wouldn’t be able to go through life.

This is why support of others is crucial for everyone born or protected by this totem.

Walrus as a Symbol in a Dream

Walrus in your dream can bring both good and bad news.

If you saw a walrus in your dream, then you might be going through some rough time in your life. you might be having some personal and career problems that are making you feel extremely stressful.

If walrus in your dream was speaking to you, then you might be in search for guidance in life.

If you fed a walrus in your dream, then you will experience changes that are going to be positive.

These changes are probably going to happen in your career.

Walrus as a Symbol in Different Cultures

As a symbol, walrus has an important role in culture of many northern civilizations.

Since these cultures lived next to walruses, they were the ones that were familiar with their behavior and characteristics.

Skin and bone were frequently used in rituals and religious ceremonies.

In one myth, by the Chukchi people, the raven recovered the sun and the moon from evil spirits by seducing the spirit’s daughter.

After this, the evil spirit threw his daughter from a cliff into the ocean, and turned her into the original walrus.

In Alaska, many remains of ivory masks and jewelry, made out of walrus tusks were found. This only shows how important walrus symbolism was to the Arctic nations.

Many myths and stories are based on walrus symbolism, making it one of the most important animals inhabiting the northern areas of our planet.

In Lewis Carroll’s poem, The Walrus and the Carpenter, walrus appears as one of the main characters. Walrus also appears as a symbol in Beatles song I am the Walrus and also in the story of The White Seal.

As a symbol, walrus played an important role for the northern civilizations until it got introduced to the rest of the planet. From that moment on, walrus became a universal symbol of calmness, kindness and friendship.