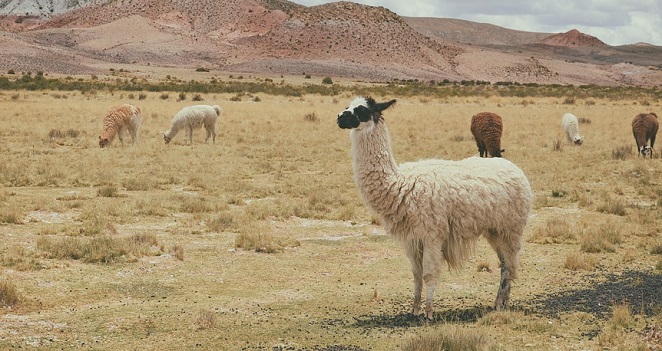 I don’t know about you, but I am obsessed with llamas! There is something gimmicky about these animals that just gives them a special kind of charm. Llamas are medium size mammals from the family of camelids.

They only inhabit the South American continent, so for many years, people of Europe were deprived of this amazing creature.

Llamas are close to alpacas, and they both fall into the same family. Their only differences are in their appearance but when it comes to behavior they are pretty much the same.

If we set aside all of the factual information, llamas have a very strong presence and character, that was interesting for people before and still is.

Confidence – If you ever saw a llama before, then you know what I am talking about. These animals are not afraid to come up to the fence in ZOO’s and show people they are not afraid.

An unsuspected or rude visitor might even be punished, since llamas are going to spit on anyone they disapprove of.

Even though inhabiting the warmer side of the globe has its benefits, it also has its downsides. This is why llamas were forced to train themselves to survive in these tough surroundings.

Llama as a totem

As a totem, llama is a symbol of strength, perseverance, communication, confidence and often success.

People born under the llama sign are people who know exactly what their goal in life is. You won’t see them backing down from anything they set their minds on, and that is the only way they know.

To others, llama people might seem a bit pushy and over the top, but they are actually very focused on achieving something. Some might see this as a negative trait, some as a positive one but either way, llama people are going to do things as they intended.

Llama symbol brings us strong energy and confidence. We can clearly see these traits in people as they radiate strength from miles away.

When these people enter the room, you will notice them.

There is no way of escaping a person born under this sign, since the attention is almost always set on them.

Unlike others, llama people handle attention well and feel comfortable when they are heard and respected.

Having all of these traits plus excellent communicating skills, success for people born under the llama sign is inevitable.

As their only negative trait, could be counted their pushiness. To achieve what they have set their minds to, llama people are prepared to go great lengths. For this reason, everyone standing in their way is only a threat that needs to be eliminated.

Considering how similar alpacas and llamas are, alpaca spirit animal corresponds to all of the characteristics of the llama totem.

Llama as a symbol in a dream

As symbols in dreams llamas bring a special kind of energy. In some cases they bring us luck but in others, we will wish never to have dreamed about these gimmicky creatures.

If you had a dream about a llama, then this dream brings perseverance and strength into your life.

Perhaps there are tough situations ahead of you and you need all of the support you can get in order to succeed.

If llama in your dream crossed your path, then a business venture you worked on is going to be successful. Whatever your business goal might be, all of the hard work and dedication is going to pay off.

If llama in your dream dies or you killed it, then you might be faced with difficult and challenging times in the upcoming period. It is best to stay low for a while and wait for a better period.

Llama as a symbol in different cultures

After the world expansion and traffic development, llamas became known to the rest of the world. That is when the Western amazement with llamas began.

To the South American people, llamas are symbols of great importance. They created sculptures, figurines and draw images of llamas often. The wide spread of llama symbols in South America wasn’t accidental, since they highly worshiped this animal.

Many important people were buried with llama body parts, in order to show appreciation and devotion to the deceased. The Inca empire was highly dependent on llamas, since they were one of rare animals that were used to carry burdens and transport people .

After he Spanish arrival on the continent, significance of llamas dropped significantly. Donkeys, horses and mules replaced llamas in hard work, but the conquest brought some good as well.

After the Spanish invasion, llamas were represented to the rest of the world and the Western civilizations were mesmerized by them.

Today, llamas are very popular creatures and we can find them in ZOO’s all over the globe. In cartoons and movies they are often represented as rebellious and gimmicky creatures that are loved for their honest nature and mischievous ways.

When you ask a person what is llama famous for, the person is probably going to reply: “For spitting on others!”. If you ever wondered why llamas spit, it is to chase away threats or to chase away undesirable mates.