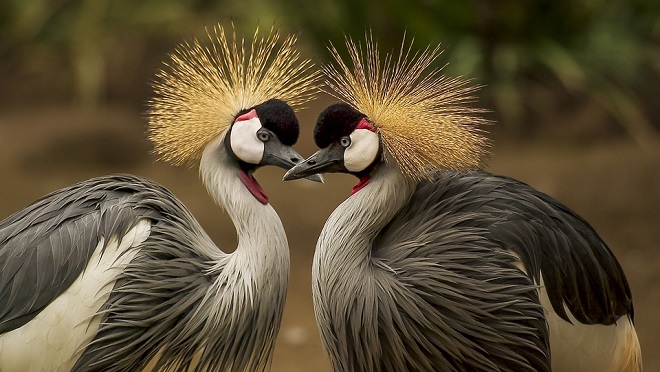 Crane is a bird that falls into the Gruiformes family. They are lrge birds that are particularly known for their long bodies and necks.

Cranes inhabit almost all continets, except the Antarctica and South America.

Symbolism of this bird was highly important and many cultures around the globe worshipped it and included their symbolism deeply into their culture.

Grace – Cranes are graceful birds that carry their bodies in a smooth and delicate way.

Unlike other birds that are extremely active and on the go, cranes rather spend their time slowly walking in swamps and on the grounds.

They are prepared to fight against other animals viciously in order to protect their habitat and their young.

Crane as a totem

People born under the crane totem are definitely social people who enjoy working together with others and going through life together with people dear to them.

Crane symbolism is extremely strong and important. They are symbols of good luck in many cultures around the world so people have a high respect for them. Everyone born under this totem is prepared to do anything for the family and friends.

There is nothing more valuable than keeping your loved ones around you, so they always put family as their number one priority.

They are also symbols of travel and social behavior. They love communicating with others, sharing ideas, and thoughts. Since travelling is in their blood, jobs like PR managers, sales representatives and reporters are best suitable for them.

Another important thing to remember about someone born under the crane totem is, that they are very territorial.

If you try to threaten their family or their life in any way, you will be attacked by these people. They cannot stand intruders and people who are trying to demolish everything they worked for.

One negative characteristic, all of the people born under this totem share is conservative nature.

Instead of breaking barriers and going undiscovered places, they prefer having a secure life without many surprises. This sometimes prevents them from achieving higher goals and makes them miss out on many opportunities.

Crane as a symbol in a dream

Cranes are important symbols in dreams. If you had a dream about a crane, then you can expect happiness and material bliss in the upcoming period. Everything is going to be working out well for you so make sure you use this prosperous period.

If crane in your dream was flying, then you are going to get a great opportunity. This kind of opportunity is something that comes rarely in life, so make sure you use it and make the best of it.

If crane in your dream was dead, then you will probably defeat your enemies and manage to protect your life from intruders.

Everyone who comes after you is going to be defeated and luck will be on your side.

If crane in your dream was talking to you, then the meaning of this dream depends on what the crane said.

Perhaps you already heard this message from someone and you forgot to take these words into consideration.

Crane as a symbol in different cultures

Crane mythology is highly important. Many cultures around the globe have their own interpretation of the crane symbolism so there are a lot of stories and myths related to it.

In the North Hokkaido, the woman of Aidu, people perform crane dance routines in order to show appreciation for this beautiful bird. The Sanskrit poet Valmiki wrote the first sloka couplet by the pathos, after he witnessed a male crane getting shot while mating.

In Mecca, Allat, Uzza and Manat were three head goddesses of Mecca. They were represented through cranes or as three exalted cranes. In the Satanic verses, there is a story about these three goddesses.

In ancient Greece, cranes were symbols of bad luck and considered omens. In many tales and myths, cranes appear as thieves who trick people and take away their money. In one particular story about Ibycus, after a thief attacked Ibycus he called for a flock of cranes to help him. They surrounded the thief and hovered over him until he confessed the crime and gave up.

Symbolic meaning of an animal is very much influenced by the animal’s behavior. In times when people based their knowledge on their own experiences, everything that was odd and unexplainable, they defined it as a work of a higher power.

Aristotle talked about the migration of the cranes in his book History of Animals. The Roman Empire considered cranes to be symbols of joy and love. They mimicked crane’s dance in order to invite love and happiness into their life.

Cranes today still hold their symbolic meaning, created by the old civilizations. Even without any symbolism attached to them, cranes are beautiful creatures. Their elegance and graceful nature is still considered as something to be admired and mimicked.

The old civilizations and cultures probably knew how to value and worship the nature and its beings more, but a little bit of admiration for this creature, is still present today.