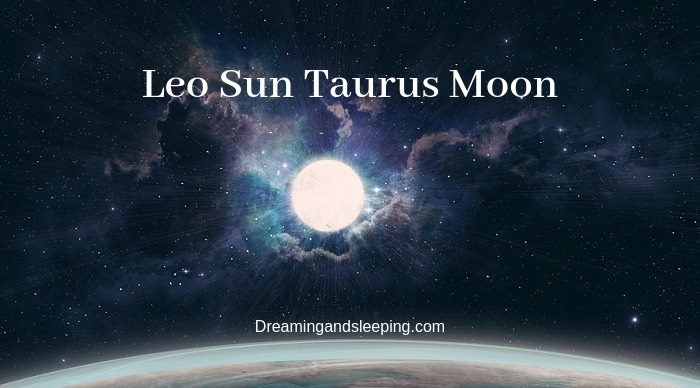 In many cultures and civilisations, the luminaries were considered as the opposite sexes, male and female. The Sun is the Father, the male, and the Moon is the Mother, the female.

In some civilisations, it is the other way around, the Moon is the Father, and the Sun is the Mother. But the connections always remain the same, and the energies are the same, like the two connected powers.

The most common situation is that the Moon is female because its light is mild and friendly, but in some cultures, the Sun which rules the day would properly be considered as the female, while the Moon which rules the chill and stern night might be regarded as a man.

So, this situation, and the energies that these two light objects carry with them, and this influence is also seen in the realm of the Astrology.

Today we are focusing our attention to the people who have luminaries located in the Leo/Taurus combination. What does this combination mean when seen in the person’s character and how he can, based on this knowledge, make his life better, read in the article below.

This person is seen both as the optimist when needed and a skeptic when the times require; when he wants something he is very ambitious and cautious not to make any mistake in his life.

This combination of traits is very good, especially in the business realm where this person can make outstanding results. He is not an imaginative person, but he is definitely the one that can create something, by his hands for example or his mind.

For the people who are close to him, this person might seem like someone who has challenging character. He is, at the same time, a seductive and generous person, very sensuous, adorned with strong willpower, and even more importantly he has a desire for power, and he is able to achieve all that he wants.

His whole character sometimes may seem to others different than he truly is – he may look like a stubborn man, without any self-criticism. He feels that the Earth turns too fast and that he does not have enough time to make everything that he wants.

This person is a true fighter, and he always tries to resolve many issues in his life by using his strength. Before he goes into the fight, he once again checks if there are enough trump cards for the safe triumph – this is one person who does not like to lose any fight.

He does not have to give up too much faith in the appearance of a sad person, and he will never show anyone that he is hurt, or defeated in any way.

Sometimes his character can be overwhelmed, and he does not enjoy in actions that he has – and the problem occurs in the times when his psychological problems are not solved, he often knows that he is also an egoist, endowed with overwhelming self-confidence.

At times, a person who has luminaries located in the Leo/Taurus combination can be focused entirely on his own life, and his needs; neglecting and disregarding what people who are around him.

In return, he will never be able to receive the amount of trust and respect, and he desperately wants to have in life. Defeats insult his pride but do not make it subjective, unless they fall asleep and criticise her mistakes.

This is a person who has a wide and altruistic nature and does not tolerate someone’s hurt of his self-love, he needs to be recognised and “loved” so that he can show this nature to the people who are close to him.

Wounded in her pride, she is able to explode violently and suddenly and to wrestle with the whole world. It is recommended that her sensitivity is not irritated and that his remarks are placed gently even when they are most well-founded, or they are not.

He is, undoubtedly, a person who has a passionate nature, although it is always stable and firm. Jealousy and a strong desire for possession are not her sides, but the power of the intellect is often restrained. In its entirety, its conquests are always the result of the incredible perseverance of the Moon that is located in the Taurus sign united with the accentuated desire for affirmation brought by the side of the Sun that is located in the Leo.

But in this combination, the Moon in the Taurus makes the true difference, and this aspect emphasises his sensual life – this is the aspect that make him a true lover, the one that is desirable for many different characters. And maybe (or for real) he gives the feeling that his lovers are stable with him in love and in a relationship.

Feelings that live in him are awesome, intense, and persistent, and lead to an active fixation on one partner. He does not cheat because he wants to hurt his current lover; he cheats only because he is bored with his previous lover, or he has a fixation on someone else.

Deep inside the fire is melting secretly and when the volcano wakes up, the earth shakes; and in his life, he will rarely have anything to do without passion and complete spontaneity.

But one thing needs to be said when we are talking about love relations, and this is the person who, regardless of his vivid nature, seeks stability. He has a loving nature and genuine, and he is the one that loves to enjoys in simple things, and also one of those people who truly enjoy life’s pleasures.

Also, when in a relationship, this is the person who is always looking for some value and in the end, and will find what the right value in his life is and will persistently and unwaveringly follow it.

As we have said, in most cases, this is the person who is usually in long-term relationships, and he cheats only when he does not love with the same intensity. When he does, he is able to justify himself in this sense, and have many explanations why is he right, regardless of the pain that his previous lover might feel.

All people who think that they could be a lover of the person who has the Sun and the Moon in the Leo and Taurus sign must know that he is the person who can seduce with ease and knows how to do it very well; and in this sense, his motto is that he will get what he wants, if he works hard.

Also, this is the person who is a tolerant and pleasant partner until someone provokes him, and in these times he gets angry, and can hardly be calm down.

So, who can be the lover that will deal with such character, and provide with enough amount of love?

Our guess is – Libra lover. He is the lover that is very interesting to the person who has luminaries in the Leo and Taurus combination. They are an attractive couple, one of the most interesting in the Zodiac. These two can be compatible, and even gain certain popularity that will definitely please them.

The temper of this person is very alive, and he is the human being who is generous toward his friends; he is a warm and loving person, who can be truly broken if they betray them.

He also has a lot of hidden power and energy, and his friends do not always know what to require from him, and he can even show some stubbornness in the desire to live the way he chooses to.

However, when he wants to move into action, he is able to tilt everything in his path, removing those who create disturbances – he has many friends, but also many enemies that he deals with along the way. His attitude hurt others, and his self-confidence and success poke the eyes of others, so he has enemies, but he needs loyal friends.

His own personal magnetism and his ability to have such presence is a winning combination in life, and because of it, he has so many people who want to be a part of his life.

In the combination of the luminaries that are located in the Leo and Taurus signs – here, we can see the great power of nature.

From this connection, a very distinctive personality is revealed; he is the one that is capable of imposing on others his will, an extremely pronounced inner life, which manages to rise above the life logic. It is generally able to bring to an end everything that has started and can provide the background when it is progressing.

So, here we meet one interesting person who when says something, must be just as he had imagined, but he is the one that has a lot of energy.

He is the true fighter in his heart and who always has the principle to wait for his 5 minutes to reach the finish line – he wins many battles this way, and in this sense, we meet here, one very prosperous individual.

He is a great altruist, a wide-eyed person, versatile and inclined to always finding more ways to make success better and to last longer, often progressing financially(and mentally) through constant movement and travel, but his comfort is of great importance, so he will not be difficult for him to do much.