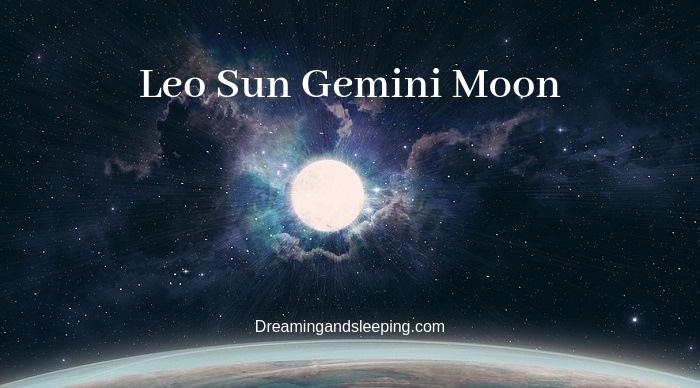 The Luminaries are not known just in the Astrology but in many other sciences (known and unknown), and there is virtually not any culture and civilisation who do not see these two as the significant elements in the individual and common life.

For some, the Sun and the Moon are in fact, or the husband and wife or brother and sister -they are related, and each of them carries certain energy that has the impact on each other and also on their surroundings. And in this sense, many myths and legends surround this belief – one of them is that the other stars in the Universe are their children, etc.

The myths that surround the luminaries often explain their role in the Universe – and the same correlation can be seen in the Astrology and a personal horoscope.

Read and see for yourself.

This is the person who does everything in a big way, and for him, there is nothing that he cannot do – he is very confident and believes that he can do whatever he wants in life.

But also, we could say that this is the person who is subtle, intelligent and adaptable, and able to find reasons to see the size in everything – the bigger, the better. But this also means that he is a big friend, a big worker, etc. His opinion and his understanding of value do not rely much on the opinions of others, and this is one human being who believes in his own mind and no one else.

Instead of self-criticism, he likes to get out of a difficult situation or an unpleasant situation with this idea, intellect and charm. And he has all of these three traits plenty – he uses all of this to be successful in work and interpersonal relations. In this sense, and in many others, this astrological position of the luminaries is considered very compatible, and the person who has this position is very lucky.

A person who has Sun and Moon located in the Leo/Gemini combination is a tireless optimist, and it often happens to him to leave an enviable position for something unclear he seems to look for – he always wants more, and sometimes he does know what does he wants. What is it that he seeks? It’s better not to ask him – the only thing that can be deduced from this is its unquestionable security that it is on the right track and the knowledge that it is able to use all of its psychology and elastic intelligence to prove it.

He will prove all people who do not believe in him, that he was right, and they will give him necessary recognition.

This person is prone to dissatisfaction and change that comes from it, so he rarely meets the small news, and he is trying to go to the end of his plans. But he does not always see the very consequences of what he does, especially in his immediate surroundings. But he deals with this in the best way he can, even in times when he hurts his loved ones.

Also, sometimes this is the person who can be confused about what he wants and when he wants it and even how to get there, and here we come to his biggest flaw – he can be confused and far from his goal, but at the same time, he will be stubborn and firmly believe that he knows where he is going.

In some other introspective, this is the person who can have the fantastic idea, a mind to develop that idea even more, but the energy can be scattered in many places, and it may take a while before he strikes his ultimate goals.

Here we encounter a person, who in love, seduce others with the words, he uses his charm and words skillfully and is able to defend his ideas and impose himself.

He is the one that quickly decides on how to get the best out of others and practically to apply his skills, and he can be successful in education, communication and public professions, but also in the love area.

But people may say that he is inclined to manipulate others, so in this sense, this person has to take care his verbal aggressiveness, and about the volcanic temperament that can hurt the people that he loves.

At the end of this section, we could say that this person does not belong to those who are too much emotional, he rather uses his intelligence, but sometimes it prevents him from reacting in the right way in communication with the people that he loves.

When in love, this is the human who cares for lovers, but this can be his weak spot, there can be certain instability in the sentimental plane.

The person with the Luminaries located in the Leo and Gemini Zodiac combination has a versatile taste when it comes to choosing lovers for a serious affair. And the most important thing for this human to know is to learn to concentrate without being impulsive, and this can be the key to maintaining the perfect relationship with his partner.

He is very curious, and nothing leaves him apathetic – he can fall in love in so many things, and his taste cannot be described.

And in the end, it all comes to this-this is the person who does not like to be alone, and he will constantly seek those who are similar to him and with whom he will be able to cooperate well.

He knows that he can be very sharp with the people that he is in a relationship with, he can be even very critical toward the people he loves. He likes active, capable and smart people than just physically nice people in the choice of partner. The challenge is to impose and penetrate, and where others cannot, he remains an amazing lover who constantly has a great desire to please his lover. Any negative experience is significant for him because he is learning a lot about people – from every negative experience in love, he learns. Who can be his perfect lover? Funny, spontaneous, fiery in bed, a Sagittarius lover can be the one that will win this humans heart. He is a skilled lover – open, honest, and straightforward, loves and respects when a partner has enough courage to make the first step. The physical side of love, sex, is very important for this human, and for this reason, he is adventurous – this is the part that works amazingly for the person who has Sun and Moon located in the Leo and Gemini combination.

As you can see for yourself, here we can see one person who has extraordinary intelligence and a developed critical spirit – it is his constant need to understand something, get to know and learn something.

He has a very developed feeling for practical, he is very flexible and but he has varied moods so that his friends need to be aware of this fact. Variability depends on his subsequent, often wiser thinking; but sometimes he cannot apply this in his life.

His talents are numerous, very different and from there, often there is a problem when you need to focus on something.

He is a social person who enjoys being in a place where something is happening – one typical trait that is connected to both Leo and Gemini sign.

The time has come, to sum up, all information that we have on the topic of the person who has Sun located in the Leo sign, and the Moon located in the Gemini sign. And we must say something – this astrological combination is favorable and gives a character that has much space to grow. In this connection, the Element of the Moon in the Gemini sign, Air feeds, but at the same time consumes and transforms the side of the Sun in the Leo sign.

A transformation of the propensity to rule, typical of Leo sign, occurs in the real affirmation of one’s own values, thanks to the individualistic line characteristic of the Gemini – the elastic, intellectual symbol of this sign alleviates a somewhat cruel and egocentric attitude of the Lion.

This person generally knows what is in him that is susceptible to influences, and it all depends on what kind of influence is going to be. Often he can show his generous generosity to others.

In some cases, when his personality is well developed, this is the person who others see as the genius who is able to organise communications and contacts and gain whatever he needs from them.

Often he can be an amazing manager, since he is able to express his ideas clearly, and then to implement them, and to work on them. He has excellent connections and is very often surrounded by a network of people.