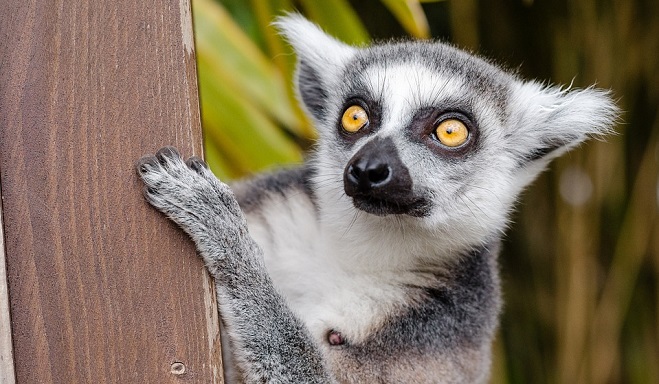 Lemurs are primates that live on the island of Madagascar. These small animals were only known to the native people who inhabit this tropical island.

Once they got introduced to the rest of the world, people fell in love with their appearance and behavior.

Active – Like many other sorts of primates, lemurs are very active and they are constantly moving from one place to another.

Since they feed off leaves, it is not hard for them to find food. Lemurs are also divided into several species, and some of them are nocturnal animals so their behavior patterns are a little bit different.

Social – Lemurs spend time in groups, medium size or smaller, and they are very sociable animals. Even when they are confronted with humans, they are less likely to run away or hide from us.

Lemur as a totem

As totems, lemurs are symbols of communication, social interactions, manipulative behavior and superficiality.

People born under this totem or protected by it are very sociable people who like spending time with others. They are easy to talk to and almost anyone can find a mutual topic of conversation with a person born under the lemur totem.

These people like hanging out with their friends and partying. They can easily be interpreted as extroverts and people who hate being alone.

These social interactions aren’t always pleasant. People born under this totem know how to defend themselves and stand their ground.

They will be open for conversation, but once you cross the line, they can become very agitated.

Lemur people are very good in communicating, so they often choose careers where their communicating skills can be well presented.

They can easily manage other groups of people and negotiate a business deal for their boss.

People born under this totem or protected by it are very superficial.

Everything they do is a reflection of their narcissism, and many of their friendships can be considered as forced.

They only care about what other people can offer to them and how they can use them to achieve their goals. Superficiality comes out even in the way they dress and the way they carry themselves.

Even though they might seem as pleasant people at first, once you get to know them better you will realize that their interests for you are starting to fade.

Only those who can provide them with good opportunities in life will always be welcomed.

These characteristics are not praise-worthy but, overall, these people are simply too in love with themselves to think about other people.

Their actions are usually unconscious and they don’t realize that they hurt somebody.

Lemur as a symbol in a dream

Lemur in a dream is often a sign of something negative. If you had a dream about a lemur in general, then this dream warns you about a possible enemy in your life.

Someone is trying to trick you and hurt you, so be careful about the people around you.

If lemur in a dream was hanging from a branch, then this dream symbolizes your playful nature.

You often care too little about important things and neglect your obligations.

If lemur in your dream was dead, then you will get a chance to defeat your enemy and stop his plan.

Someone will try to trick you into something bad, but this dream tells you that luck will be on your side.

Lemur as a symbol in different cultures

Lemurs inhabit the Madagascar island, therefore lemur symbolism was created by the native people of Madagascar.

The complete island is full of lemurs and they roam around forests freely, jumping from one tree to another. To the native people of Madagascar, lemurs are almost domestic animals since they interact with them on daily basis.

Native people of Madagascar believe that lemurs have souls that can inflict revenge upon anyone who tries to mock them or kill them. This popular belief stuck until today and because of this lemurs are considered almost as sacred animals.

Tribes and even entire villages believe that a certain type of lemur could be the tribe’s ancestor.

Because of this, that sort of lemur is worshipped and killing it would bring bad luck to the entire tribe or village. Indri word for lemur is babakoto, which actually means Ancestor of Man.

Western cultures embraced this animal and together with sloth, word lemur is one of the most frequently Googled animals.

Lemurs are featured in popular TV shows and cartoons, and even streets in London and in the US are named after these primates.

Probably the best known character today, especially for children, is the King William from an animated movie Madagascar that was released in 2005.

Since then, more than 100 million people watched the movie. Rise of lemur popularity in modern cultures is on very much present, and it has already become one of the universally known symbols.