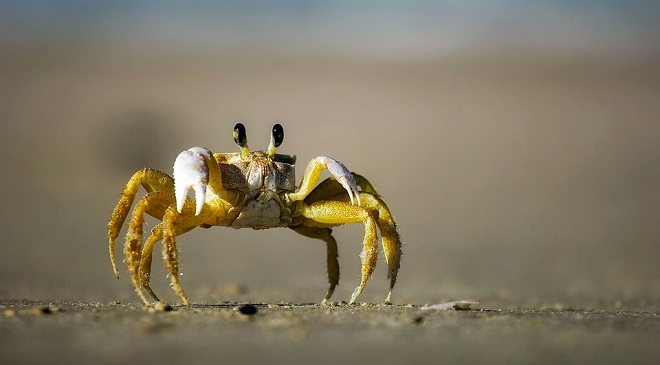 Crabs are crusraceans that live in water. Their symbolism has been developing for centuries and ancient people noticed the symbolic nature of this small creature.

Even in modern times, crabs take on a special place and they are often used as symbols in various occasions.

Toughness – Crabs don’t only have an outside shell to protect them, they are also quite resilient creatures.

Crabs often live in tough living conditions with a lot of natural enemies, so they have to adapt to these conditions in order to survive.

Defensiveness – Crabs will use their claws to attack even a bigger animal in order to protect themselves.

Their outside shell protects them from enemy attacks as well, and this is the trait that is most commonly used when talking about crab symbolism.

Crab as a totem

One of their best characteristics is their perseverance. They are able to outstand all of the problems and obstacles that get in their way.

People born under this totem can often seem like very-self-confident people who know what they want and how to get it.

Their goals are usually set at an early age and most of them reach these goals by hard-work and dedication.

However, there is a side to these people that rare find out about. This side of them is sensitive and very intuitive.

This can often become a flaw, especially if these people let their emotions to overrule. To them, even a slightest sign of neglect or any other negative emotion is going to be multiplied by 100.

When agitated like that, people born under the crab totem are prepared to attack their “offender” and destroy everything and everyone that comes on their way.

On the other side, when they love they fully commit to that person and never feel the need to look for someone else.

Their emotions are very strong and this is why many people cannot understand them.

Being around them means you will get a hurricane of different emotions in a short period of time, but when they are on their best behavior they are incomparable.

Crab as a symbol in a dream

As symbols in dream, crabs can often appear and bring us both good and bad news.

If you had a dream about a crab then this dream represents problems and obstacles that are coming your way.

These problems might be linked to your personal life or to your professional life, but either way you should be prepared.

If you had a dream about eating a crab, then this dream represents sickness or health problems that are going to affect you.

These health issues could become serious if you don’t pay attention to them, so make sure you visit your doctor on time.

If crab in your dream was on the shore, then you will receive a very good offer in the upcoming period.

This offer refers to your career so make sure you make the best out of it.

If you caught a crab in your dream, then you will receive information that is going to change your life completely and make it better.

This dream can also represent your shy personality, that is always looking for new ways to express feelings and emotions to other people.

Crab as a symbol in different cultures

Crab symbolism is very strong and it has been present since the first paintings and writings done by humans.

In Western cultures, crab is one of the symbols of the Zodiac. In Western Astrology it is represented by the Cancer sign and people born under this sign are highly sensitive and mysterious people.

Crab is a strong lunar symbol and in Tarot, crab card enhances the strength of any other card that gets drawn.

Since crabs cast of their shells after a certain period of time, people often linked this behavior to rebirth and new start in life. Their shells protected them from outside sources, just like we often introspect and spend some time with our thoughts.

Crab in Greek mythology, was often used as a symbol in myths and stories. In the story about Karkinos, a crab helped Lernaean Hydra in the battle against Heracles.

Crab symbolism is still present, which is highly influenced by Astrology and Tarot.

They depict the nature of this small creature in most detailed way and help us understand how the symbolism of crab came to be.