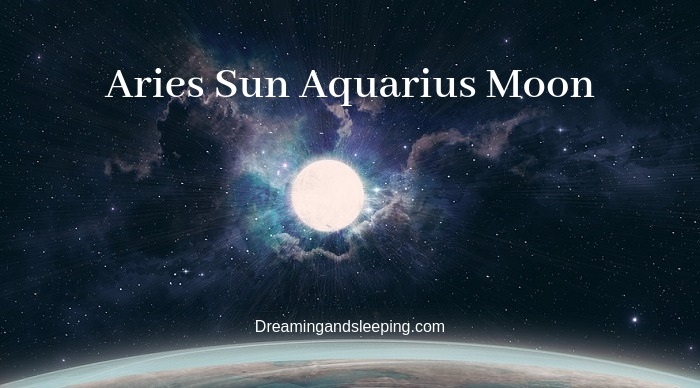 The Sun and the Moon both have an amazing influence when we look at the personal horoscope, and it is relevant to understand what these aspects bring.

So, for this purpose, we will give you one interesting example – let us say that someone’s Moon is in Gemini, the person should be directed to all areas that have to do with communication, emotion analysis, writing, reading, or any form of expression.

So the Moon can point where you should direct your actions and activities in life. And if a person finds what he is doing well, or has an interest, for example, writing, through engaging in this activity, he may want to create something more than that, which is already the path to the Sun.

Now, today we are focusing our concentration to one human being that has Sun located in the Aries sign and the Moon in the Aquarius. We will try to reveal what this means for his personal development and where he should direct his activities.

In the character of this person, many things are combined, even those things that are not seemingly good for matching. His character combines originality, spontaneity, and this human being is in great love with life in general; and in this process, he is able to discover everything that he desires curiously.

He loves and respects freedom, and this is maybe the highest value in his life, and all people who are around him, must be aware of this fact, and never to take it as something that is negative.

The one that has the Sun located in the Aries and the Moon in the Aquarius Zodiac sign posses spirituality and openness of the spirit, which gives an idealist who is sometimes provocative, or at least an inventive. These two aspects are seen in all of the actions, along with the necessity to be the person who will always get the best out of his environment.

On top of all other things, this human is very confident in his identity, despite all that is happening around him. His pronounced altruism allows him to feed deep emotional feelings, staying away from anything that is banal and vulgar.

This person is in love with everything that is new, and he believes that tomorrow will be better – so he is in this way, very sociable human. His success in communication is evident, and he has the desire and the way to succeed.

At the same time, the most important task in his life is his independence that he has to take care of – and he will direct all of his recourses for the achievement of this goal.

Many ideas and plans are always in his head, they are original and not always done, but he does not seem to hold it as he likes surprises and challenges.

In the end, we will say that this person is above all humane and noble person who is a humanist and altruist that you will rarely meet in life. He is a great philanthropist and often feels the need to help others because of a highly developed empathy towards others’ problems. Whenever an opportunity arises, he likes to show his good works to others.

Sometimes this human being has a naive view of the world and itself, but this is just one small disadvantage since he is able to prove in a large number of cases an extraordinary freshness of view and he will never succumb to the influence of others. Sometimes he can be so naive that he accepts that others want him good, while others just want to put him down since he is the one that is strong and confident.

But the main blessing and the worst trait in the character of the person who has Sun in the Aries sign and the Moon in the Aquarius is his pronounced individuality, right up to the point that he loses perspective and ability to see the greater picture in some situations in life.

When it comes to emotions, here we meet one person that rarely for others openly shows the emotional side of his personality. In this respect, he can often leave the impression of an “inaccessible” person.

He may seem cold and distant, be he is just a person who is individualistic and who does not need anyone else to feel complete, but this does not exclude the opportunity to be in love and to have that significant other in his life. He has so much to offer, but he will never be the one who will throw himself into the love affair just to be with someone. In the end, he feels good when alone; that is the catch in all of this.

He will reluctantly talk about his deepest feelings openly before others, but he will almost always show his will when, for example, in terms of expressing altruistic, humanistic and other beliefs.

When it comes to love, in the case of this particular human, what people should realise is that he, in the first place loves life in general, then he loves his life and independent, and then he is able to love someone else, in some romantic way.

As you were able to see, the human who has Sun in the Aries and the Moon in Aquarius sign is the extreme individualist who does not need that other person to feel happy or complete. But that other person could come as an amazing contribution to his already amazing life that he leads and that he cherished so much.

When he chooses lovers, this human has an open mind, a cosmopolitan view, and an unprecedented understanding – so there are not many conditions that a potential lover has to fulfill. He chooses his lovers by using his pronounced intuition. And when he loves – he loves with all of his heart that is one very pleasant and hospitable place that at the beginning wants to give everyone the opportunity to accept him in a friendly manner, give him a place in his life and then love him.

Who can stand on the line to this amazing human being that has unmatchable confidence, who is a strong and dominant person, who above everything else cherishes his freedom and independence?

The only person who can be his match in love is born in the Zodiac sign Leo – he is the one lover that will bring success and splendor. This is a relationship that could work since both partners are very successful, careerists with the big capital that will continue to develop even more when together.

We must say that conflicts, stresses and tense situations are possible, as well as sudden changes, but they are generally ending well in the end. They can find the common language, but they have to learn the art of communication, as the only possible way of leading life in two that is filled with love.

It is not always simple to neither follow the ideas of such a person, nor predict what he is about to do next, so he often surprises others, even his close friends. And since the person who has Sun in Aries and Moon in Aquarius sign usually has the need to fight for a goal, to allow passage of his ideas, to expose them to the widest audience, his friends, at least those who are close to him, need to follow his lead.

He tries to help others because doing good things in this way makes him feel better. He wants to, for the benefit of humanity (and also when his friends are in question); make his contribution so that, at least partly, he can try to make this world a better place. Maybe this goal sounds utopistic but he is like that, and all of his actions in life, and friendships also should be seen through this perspective.

In his life, he continually strives to expand and enrich the circle of its friendships with new acquaintances by not making big differences among people and not making rough breaks according to their property or social status.

In the character of this person, we can see the unity of fire and air – this is the human being who wants to direct his life toward reformatory and progressive ideas.

He never fantasises about these goals, a person who has Sun in the Aries sign and the Moon in the Aquarius sign realise his goals, in many ways than one. He is not such a theoretical person as he is practical and innovative – in practice, he reflects in the joy of creation and the desire for active participation in life.

He is the one person that lives and breathes just to present many ideas into the world, and he truly wants this world to become a better place. People who know him should be aware of this fact, and accept all of his deeds in this light. If not, this human could never be understood for who he truly is.

The Sun in the Aries and the Moon in the Aquarius influence this person to really enjoy being different, even has pride with his individualism. The temptation for freedom and adventures (Aquarius), the tendency to risk (Aries) and the pursuit of ideals are made up of him. And in the future he could become a great entrepreneur, researcher, stubborn predecessor and born pioneer – he is endowed with great mobility and unbelievable self-confidence.