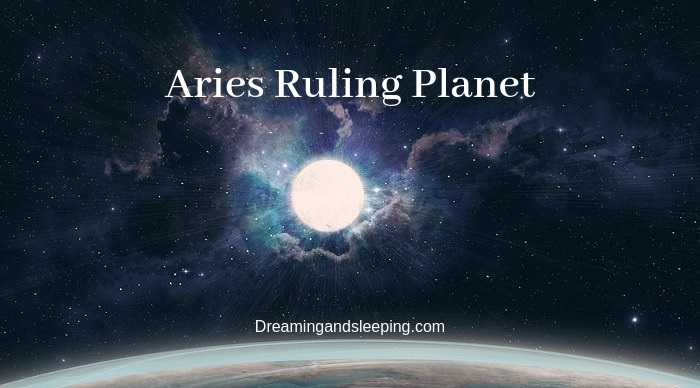 Planets are one of the main aspects of any natal chart and horoscope in general. It is important to know that planets are objects that circulate and move, but they affect the zodiac signs, and this is what interests us.

They affect people in relation to their location in their natal chart. While many people know for sure what their zodiac sign is, few know what the planet is that controls their sign, and in this sense, it is really important to know this since the ruling planet is the reason why a certain person is what he is.

In today’s case, the ruling planet for the Aries sign is one almighty Mars – this planet is connected with the masculinity, and it is known for the intensity wherever it is found. Mars is the ruler of Aries but also Scorpio, so wherever he shows his face, there is going to be a lot of passions and strength.

Those born under these signs are always moving forward and have little time to think, they do not do anything slowly, these people often show intense dedication to victory, but always require loyalty.

Things are going to be much more clear after the acknowledgement that Aries is ruled by the planet Mars. Read more about this topic.

Aries is the first (a leading) sign in the Zodiac system of signs and his presence always marks the start of something energetic and turbulent – there is nothing that can stop these people who are ruled by Mars.

People who belong to the Aries Zodiac sign and for that matter to the Aries, thanks to the ruling planet – Mars, is one of the most active horoscopic persons.

It is also said that Mars gives that symbolic symbol of that points to the strength, and these people are seen as the true universal winner.

People born under the rule of the planet Mars, just like Aries people are destined to stand out by seeking answers to personal and metaphysical questions – they are prepared to struggle vigorously until they reach the desired goal in life, with the purpose directed in these issues that cannot be reached by anyone.

So, Aries gets all that it takes to win in life, thanks to its ruler, Mars. This planet is a symbol of a warrior and shows an aggressive nature in some ways, but as long as that aggressiveness is directed in the right direction, things are ok.

With the Aries, there cannot be any negotiation and compromise when he decides to take action, and he does it. Mars is also a symbol of blades and weapons. People who are strongly influenced by this planet can be military leaders, or leaders of any kind, in a society.

Every planet brings both good and bad influences on the person who is under their impact, and the same case is with the Aries people and their ruling planet, Mars.

As far as negativity goes, these people are “cursed” with impatience, ungrounded assertions, fear of limitation of any kind.

They always have to be right, and in that process, these people are very sudden and impulsive; Mars makes them hasty and explosive, and innate arrogance can hurt others.

These people are also those who can be bored by something, and they without any apology get away from the discussions, and it’s even easier to get offended.

However, Aries people can be even worse – they are often rude, intolerant, and unforgiving, all thanks to their ruling planet, Mars.

What also can happen, in a negative way, as a consequence of Mars impact is that Aries people can be quite unpredictable, jealous and possessive, and this is a flaw that they rarely can correct.

Because of the desire for domination, as business associates, they can be quite unpleasant, and as bosses unbearable.

They can have problematic interpersonal relations that they do not know how to resolve; they are not diplomats or compromising in any way; they are warriors who want to win and to be dominant, not to back down. And surrender for them means death, so the tendency to get overdramatic is also present.

When we are talking about the Mars influence in the realm of love life as far as Aries sign is in question, things get even more enjoyable.

Here we are talking about people who love flirting and certainly are persons who will take the initiative when it comes to romance- this is also one place where these fiery people would love to win, God forbid to be rejected, they could not take it.

When somebody’s eye-catching, they will react quickly. However, in order to keep the Aries attention, you must be as energetic and exciting as he is – and this is not an easy task since they have Mars to give them energy and passion.

Aries people, who are affected by Mars, are incredibly passionate and adore an adventure. When their love fire burns, it really burns – but you have to be ready that they would want to be those who will lead the entire game of love, not you.

Passionate relationships are characteristic of the people who are under the impact of Mars (and it is not just about the Aries people; the same case is when it comes to Scorpios, for example).

When you look at their characteristics in love, you can clearly see that Mars mixed his fingers into it. It gives strength, passion, but also the incredible amount of possessiveness and jealousy that can ruin their love affairs, regardless of their quality.

But, when these people love, it’s usually for life. As long as there is a lot of adrenaline and excitement that pumps blood into veins, the relationship will be durable and long-lasting.

There is no doubt that Mars will give Aries strength and talent, and courage to make anything from their lives, in work for example, but this also means that these people will suffer and make some wrong choices because of it.

They cannot save any many, regardless of how much they have it, and the reason for this is that they genuinely enjoy spending money on shopping, gambling and adventure.

These people live in real time and are not focused on the future, his philosophy is to live for a moment – this can be good in friendships, for example, they are amazing for society, but as far as work or finances go, there are many problems regarding this.

They do not think about what will be, Aries people are direction all that they have, including money into something that gives them passion at the moment. Things get easily boring to them, passions in the case of Aries people can last really short.

But we must also say, that the Aries people are those who can enjoy whatever they are doing – work or any other activity, these people either love to do it, or they hate it, there is not a middle ground.

Dynamic Aries people are, as you were able to see, ruled by a red planet, or Mars. This means that they are active, attractive, determined, one that moves things and creates events. Mars has a cycle of two years – it needs two years to go around the Zodiac circle and come to the same place.

This means, as Astrologers like to explain, is that the energy regeneration phases and the energy cycle that lasts two years after which the new period begins again. All Aries human beings react more strongly to the transit of Mars, as well as to the aspects in which it finds itself in the sky.

Mars is a warlike planet that has enormous energy – it can be seen in astronomy, and all other science, including Astrology. Some say that the planet Mars represents the man himself, but it also points out to the animal urges and huge ambitions in people (and as you can see in the case of the Aries people, they love all kind of sensual pleasure, but are for sure very ambitious).

People with active Mars have an innate need to be the leaders of a group. They are inclined to dictatorship, and if Mars is poorly viewed, they can be evil, in some ways, either in general, or some of their actions can be seen as evil. Or in the majority of cases, they can have some evil thoughts that they are afraid of.

In the end, those who are under Mars impact, like Aries people are strong, intellectual and brave warriors who can be reckless, but charming.

In some cases, they can be destructive, overly energetic, exciting, surprising, fiery, powerful, furious, stubborn, and impulsive – and like everything in life, this can bring success, or can lead them to failure.