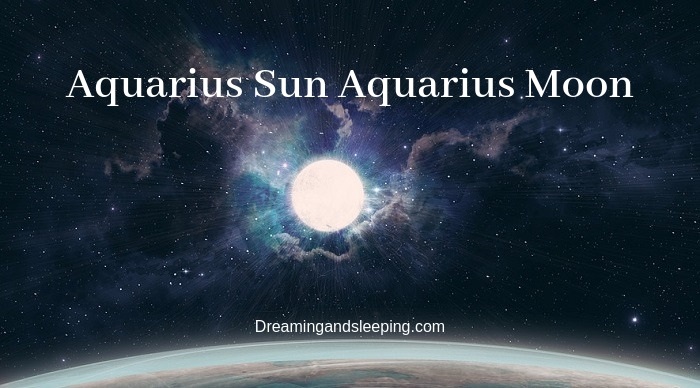 Many times now you must have heard when you have read about the horoscope, about the term planetary transit, and you have been wondering what it is.

Now it is time to find out what is it so that you can understand your personal horoscope – the planetary transits describe the movements of the different planets as they move around the Zodiac signs?

Among them, the special place takes the luminaries or the positions of the Sun and the Moon, and today we will explain how they affect the life of the person who has them positioned in Aquarius sign.

Does this mean that this person has an amazing and well-rounded character since both luminaries are positioned in the same sign? Read all about this theme.

First of all, we will say that the person who has Sun and Moon located in Aquarius sign maybe seems to be a very complicated person, but in fact, he is not. He is more than ready to participate in the problems of the outside world and is deeply humane.

He is the person, who is very acceptive of his own defects and virtues, and he sees this as a part of his originality – this is the person who can make the best results in his life just by knowing his strengths and his flaws, and using the best out of the both sides (hiding one and pronouncing the other).

This is a human being who is listening to the world and is paying attention to an abundance of beings and things, all in the attempt to make the world a better place for the generations that are about to come.

He may seem childish, but he can show an amazing amount of the maturity, and this is the combination that belongs to people who through their power, will and skill come to good opportunities in life.

He is the one that loves to try things and believes that in the knowledge there is power and he wants to have it; he likes to try everything new, modern and is extremely witty and smart. People are fascinated by him.

There is no doubt that this human being wants to be at the centre of attention, but he does not need much effort because he appears to attract attention with ease.

He is also the one that is very tolerant in love, and he radiates the charm and energy that fascinates many, but only a few can be with him for real.

So, it is very hard to follow him and to be the part of his life, he can be eccentric, humanistic, and rebellious – but always with “cause.”

Perhaps this is the person who can’t be understood by ordinary people because he always goes ahead of time and has such futuristic ideas that he is so misunderstood that he is a loner.

Sometimes a person who has Sun and Moon located in Aquarius sign is the one that will suffer badly because he cannot present his ideas in the right way and often has communication problems where people easily give up on him.

Who wants to listen to a person who speaks things that others do not understand and that are in some way difficult to comprehend? No one and this is the reason why this human being is alone and even rejected by the majority of people.

Otherwise, this is the person who can be very sociable, noble, honest, but it is just about the fact that he ahead of his time.

He does not have any problem in being rejected in some way, and he sees love as something that should come naturally, and that should not be pushed into; love should be for all and spontaneous.

He makes things really clear in this sense, who likes him, is very welcome to his heart and who does not can go right away. There is no effort that needs to be invested in love, and things must come naturally.

One more important thing for all to remember is that the person who has Sun and Moon in Aquarius sign enjoys being different, even pride with his individualism – and he often wants his love to be such, interesting, original and different from anything else.

In fact, he has enough personal attraction to attract other people, and he will be in love with people who are rejected by others.

One more thing needs to be said in the realm of love when it comes to the person who has both luminaries located in Aquarius sign, he is the one that is subconsciously afraid of loneliness and old age, but he is subconsciously more responsible and wants to have a person who will follow him in this journey.

This could be his motive to succeed in love and to be happy in love, in his own way and his own sense of what that relationship should be.

He wants to invest his time and emotions in friendship, and love and will do what he thinks is necessary to do so.

At times he creates tension in the relationships because he does not like foil, fake shine and people who live fake lives, and he does not want to be the part of that charade.

He emotionally chooses dynamic, discreet lovers who can be his match intellectually, but often he chooses people who are stronger than he is.

Family and marriage mean a lot to this human being who has Sun and Moon located in Aquarius sign, and although he loves freedom and experiences strong personal transformations, he is the one lover that knows very much what he likes.

He does not like to be bossed around to be dominated, and he likes when his lovers are strong just like he is, but he opts to the warm, friendly relationships from which point something greater can develop.

He must admit that he enjoys being different and is a great individual, so he needs someone who will deal with it.

He is extremely curious and likes to try everything so that he can be ready for many love experiences, but he also sometimes completely withdraw and live peacefully alone.

The perfect match for this human being is the one that belongs to the Zodiac sign Libra.

These two have a somewhat turbulent relationship in which both are able to enjoy, and we could also say that these two are adventurous and fast-seizing things that are always the same.

They constantly want to be on the move, and they will have a great company whose parties will be happy to attend. With their irresistible charm and sense of humor, they are able to conquer everyone, and this is their only problem in this relationship.

The trust will only avoid excessive jealousy. Faith is one of the stronger sides of this relationship. They simply adore each other and can last really long, only if they commit to each other and if the timing is right.

All of his friends, and there can be just a few of them, in fact, must be aware that this is the person who is very advanced in his thinking and subsequently in his actions.

He is very interested in everything that contributes to the progress of humanity, and his friends must be a part of the same cult. The haze of an unusual and unique one always floats around him, he is very curious and trying to figure out the flow of thoughts from other people – no one can fool this human being who has both luminaries located in Aquarius sign.

Thanks to these characters, he will have an interest in everything, and in some way, he is much more interested in others lives, then he will ever allow others to get into his life. He is very private in this sense, mysterious and shy.

But this person will never sacrifice his innocent desire for freedom, so his friends should never even try to do such a thing, and attempt to hurt him in any way!

This human being also needs a lot of stimulation of any kind, and he must learn to control his changing nature and temperament. If he does not master them, they will master him, and during that process, he will lose his friends!

The sentence I belong to me is the best description of the human being who has both luminaries located in the Aquarius sign – he shows the deepest sense of individuality.

He will never allow anyone to risk penetrating into this world, for he “must” be and most often differs from the world of others.

The biggest problem for him is the feeling that he is limited or impaired. Because of the pronounced and constant desire for freedom and justice for all, this human being will always strive to ensure freedom as it suits him.

Maybe this human being has the reputation of a cold and powerless person, but it is only his defense mechanism against closeness. Learning to trust others and healthily expressing emotions are the two skills that gain growth and development over time in the life of the person who has Sun and Moon positioned in the same sign, the mysterious and futuristic Aquarius.