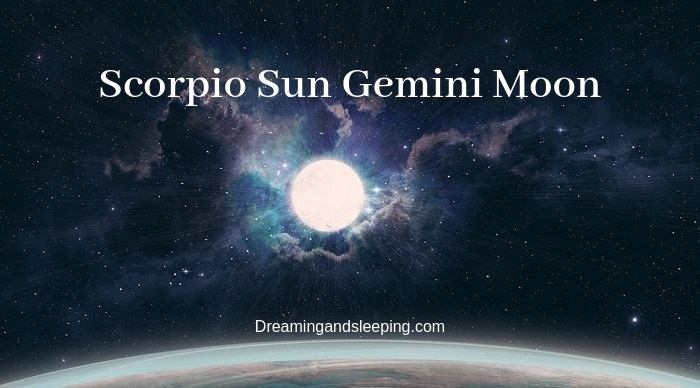 One thing must be clear right away, and the Astrology should not be seen as the science, method, theory or whatever you want it to be, as a deterministic or fatalistic, it is even more than this.

This is the science that also has a connection with human behavior and therefore with some kind of special psychological touches.

So, human behavior cannot be predicted completely, so in this sense, you cannot blame the planets for everything that is occurring in some form in your life; but you can use the knowledge that you acquire from the Astrology, in your natal chart and to live the best life you can.

Today, we are talking about the people who have Sun located in the Scorpio sign and the Moon in the Gemini sign. This person has one very interesting nature, so read all about him.

This astrological combination gives an extraordinary intelligence and a developed critical spirit – this human being is in constant need to understand, he lives so that he can get to know and learn something, and eventually use it later in life.

Also, this person has a very developed feeling for practical work, and he is not just a person of ideas that will never see its realisation and practical usage.

He is flexible in his actions and can have varied moods (thanks to the Moon in Gemini sign); and that variability depends on his subsequent, often wiser thinking.

Also, when it comes to his virtues, this is the person who has good coordination of the movement and something more sensitive heart than you maybe expect.

He is versatile, but the one that has to learn to concentrate without being impulsive, but one more thing must be said – this human being is much more positive than most Scorpions (thanks to the Moon that is located in the Gemini. It is fun to be in his company, but he just must take care never to waste energy while doing multiple things at the same time.

Some people see this person with the Sun in Scorpio and Moon in the Gemini sign as a sharp person who is tempered by a greater internal and external balance, so that this personality is never lacking moral orientation and deeply philosophical, religious and intellectual interests.

However, this person sometimes provides such a vivid vision of existence that he cannot completely avoid the temptation that may come in life, and this is the time where this person will fall miserably.

He makes the wrong choices when he suppresses his feelings and all in the attempt to reach the conformism and anti-conformism. He can fall into bad conflicts, which can sometimes lead to neurosis and problems that he can have a problem in dealing later in life. The problem is in the fact that everything that he does is intense, and when he is in problems, he suffers intensely.

In the long run, this is the person who can have difficulty in adaptation, as well as some inability to find true happiness, to be blessed and carefree (and this is the direction where the Moon in Gemini leads him).

One more thing must be computed in this section – in the character of this person, the leisureliness and seriousness, the mobility of spirit and anxieties are combined so he can be incapable of functioning and can be the subject to fears.

When it comes to emotional intelligence, this person shows extraordinary diplomacy, strong power of seduction in a lovely manner – he is the one that gets everything through a smile.

He loves the order in all areas of life, or the majority, although he is not too disciplined with regard to habits – sometimes his temptations can lead him in a completely different direction, and he can make a mess out of his life. This is a person who likes to work and who is busy with challenges in life, and love can be seen as just one more challenge that he must go through.

He is not one of those lovers who want to do something for fame, but he may want things in love just if others want it, but cannot have it. Because of such attitude this human being often encounters love relations in difficult but very specific situations. Once again we must say that his love is not simple, or boring, but it is certainly passionate and interesting, and this always carry difficulty with it, and he does not always deal good with them, but that is life.

Others fall in love with him because he has the vigor, the clarity, and the gentleness of the spirit that is accompanied by a great veil for knowledge and it’s deepening; he is intuitive and living intelligence tries to uncover the secrets of humanity, and the first point in that process is finding a true love.

Emotionally, when we look at the Scorpio people in general, this person is not totally different, but it tends to be in a fine relationship with no pomp. It’s hard for him to get nice, but somewhat more optimistic and cheerful partners, since he has that particular sort of darkness in himself, and in some way, he attracts similar lovers.

There is no doubt that this human being with the luminaries located in the Scorpio and Gemini sign is a good partner, although he has a lot of paths that he may walk in his attempt to find the perfect match.

His lovers must be aware that this person may have problems with his free time and organisation, and a problem that he does not have the opportunity to consecrate to partners as he would like.

He would benefit from expressing his love (the Sun in the Scorpio sign), but the part where the Moon in Gemini does not want to involve seriously and likes to experiment first, makes things problematic.

Emotions should not be a bigger problem, although he knows how to calculate, has occasional and emotional “trips”, somehow new emotional challenges are offered continuously to this human being. In marriage, he tends to be all right and that there are no limitations and problems.

People who come from other cities, states, are very attracted to him, but it is not uncommon for them to fall in love with people that are completely opposite of him. Of course, we are not saying that these relationships could work, and most commonly they do not, but he is attracted to them and wants to try something new and uncommon.

So, this person should opt for someone who is calmer and relaxed… who can this be?

This could be the representative of the Zodiac sign Libra – These two signs are the perfect pair. They have everything they need for a firm and stable connection; they are passionate, each in his own writings.

They will never limit their freedom to one another, but they have mutual trust -may be the one that has Sun and Moon in Scorpio and Gemini sign can show a small tendency to be jealous, but the balanced Libra will relax him.

The problem will arise when they lose that trust in each other, cause the Scorpio part will start being possessive, and if Libra could not deal with it, or does not want, then things can collapse. When it happens, it can be very hard for both sides.

This is the person who can be an amazing friend, but also the one that can hurt his loved ones with his words, and he needs to use them skillfully and with care.

All of his friends can see his great abilities, and he can be quite successful in education and communication professions – often times his friends belong to this circle.

Otherwise, he may be prone to manipulating others and prone to sarcasm, and this is the main issue that breaks his friendships, even those that last for a long time.

So, this human must be careful, since cynicism is lurking everywhere around him; he needs to take care of his negative intentions, and verbal aggressiveness, and the volcanic temperament that can hurt people who are close to him.

In the times when he is in such state, he does not choose his victims, and attacks all that are in his way, and the first that will take the blow are his friends.

HIs intelligence sometimes prevents him from reacting in the wrong way, and if he devotes himself to an altruistic activity can you hope to get great things from life.

In this combination of signs, the Sun in the Scorpio and the Moon in the Gemini sign makes this personality – the one that has a clear mind and emotional management, which is typical of the Moon in Gemini.

Also, we can see the iron will that is associated with productive expressiveness -the trait that comes from the Sun in Scorpio. This personality of broad aspects is created, both in daily activities and in meeting their emotional and intellectual needs.

It happens; however, that psychological dependence is adapted to instinctive pulsations and that enables this human being to be freed from the habits that are not good.

The first thing such a person should do is to be free from fear of failure; after that, he can let his research spirit to find more solutions for each problem and, with full knowledge of things, makes decisions with determination, as if he wanted to learn from his previous mistakes.