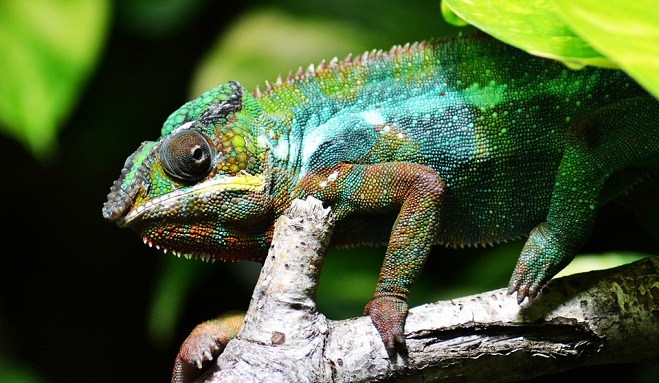 Chameleons are definitely one of the most interesting creatures on our planet. They belong to the family of lizards, but what sets them apart from other lizards is their ability to change color.

They can easily adapt to any background and blend in in order to protect themselves from predators or catch prey.

Chameleons can be found in many parts of the world, partially because people have spread this specie around the globe.

We can now even hold chameleons as pets and enjoy their unique appearance. Chameleon symbolism is very strong and important and it has been present for centuries.

Once people noticed the power this animal has it instantly became interesting to us and we could easily relate its traits with people’s behavior and characteristics.

Slow – Chameleons move very slowly. They need a lot of time to get from the bottom of the tree to the top, but somehow they always look like they have a goal in front of them. In most cases they simply lie on the branch and sunbathe.

Adaptive – Chameleons adaptive characteristic exists not only on its outside. Chameleons are very adaptable to their surroundings and habitats. They can endure great heats and cold weather because, sometimes, there is no way around it. Best example for this kind of habitat is the desert.

Chameleon as a totem

As a totem chameleon has been, and remains to be, very interesting for people. Their ability to change color and adapt to their surroundings as well as their calm ways, is enough to link these traits to certain people. 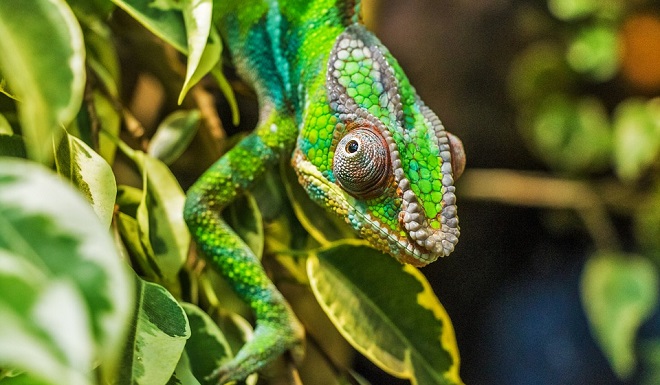 If you are born under this totem or if you are protected by chameleon spirit animal, then you are a very calm and peaceful person. There is not much that can make you feel angry or make you feel anxious. Chameleon people enjoy relaxing with their friends and family members and talking about light topics.

You approach people in a kind and calm way, and make them feel confident so they can tell you almost everything.

You are a very good listener which makes you an excellent friend and partner. You always know how to help people around you precisely because you listened to their stories and you got to know them very well.

Chameleon people are very steady and stable in life. There is not much adventure present in their lives but that doesn’t mean they are boring.

They simply enjoy little things in life like reading a book, going to movies and catching up with an old friend. These little things make them happy and fulfilled.

They rarely take risks especially if there are people in their lives who depend on them.

Even though they are quite steady and stable, chameleon people like to stand out with their appearance. Just like chameleons they enjoy wearing bold, bright colors and patterns but they enjoy standing out with their personalities as well. They rarely follow someone and rather do their own thing.

Adaptation is another trait that was clearly influenced by chameleon’s ability to change color of its outside. When it is necessary, chameleon people can easily adapt to changes and restart their lives. This helps them fit into almost every work environment and social group.

When it comes to love and career, these people are curious. They love exploring their options and peeking into almost every area of employment or going out with many partners until they find the perfect match. Their curiosity is present in their everyday lives as well, and they enjoy hearing few gossips now and then.

Another good trait is patience. These people are able to wait for the right opportunity for as long as it necessary.

For them, it is better to be patient and wait for that right opportunity rather than to rush into things that don’t seem right.

Negative characteristics that can be linked to people born under this totem is overly calm and almost passive behavior. In certain situations in life, they seem to miss out on many opportunities and chances because they were waiting for that perfect one. So, a little bit more decisiveness in life would be good for them in the long run.

Chameleon as a symbol in a dream

Chameleons in our dreams can have many different meanings and they all depend on other symbols inside our dream. Sometimes chameleons bring us positivity and other times they bring us bad news.

If you had a dream about a chameleon in general, then this dream is a representation of something positive that is about to happen to you. Perhaps you will win the lottery or maybe the project you have been working on is going to be a success.

If chameleon in your dream was dead, then this dream is a representation of bad luck that will enter your life. Things will start to go downhill in the upcoming period, and you won’t be able to change their course. Laying low for a while is the best option for you.

If chameleon in your dream was changing colors, then this indicated that you are a very adaptable person. You easily blend into every social group and situation. Alternatively, this dream represents a future situation that will require your adapting skill.

Chameleon as a symbol in different cultures

Chameleon symbolism has spread from countries in the Southern hemisphere to the countries of the Northern hemispheres. Reptiles in general were often feared by people and considered to be omens because of their bad depictions in ancient times.

Chameleon mostly inhabit warmer parts of our planet, and to the people of Zaire lend Arebati, chameleons were seen as the Creators. To them, chameleons were life-givers because they came closest to the God by climbing high on the trees.

Another legend says that chameleons were entrusted by the Unkululu, an African creator-God, to deliver an important message to humans. Chameleons were supposed to tell people that we are immortal and that after we die our lives will continue in the spiritual world. In most tribes in the West Africa, people are afraid of chameleons and consider them omens.

In earlier age of Christianity, chameleons were associated with Satan. The fear of chameleons came from the overall fear of reptiles that were depicted as enemies in the Bible.

Chameleons in modern culture are widely used as symbols of adaptation, freedom, unique appearance and calm behavior. There are many sayings that best explain how people today look at chameleons.

We use chameleon references to express the ability of a person to adapt, to change its appearance and show that creative side. We often call people “chameleons” when they often change their personal style and when people are able to show us different characters in movies.

Chameleon is one of the words that is often used in modern times, and many even devote it a special place on their skin by doing chameleon tattoos.

Chameleon tattoos are symbols of change, curiousness, adaptation and uniqueness.

Chameleons are definitely interesting and attention-worthy creatures that have much more to offer. Learning more about their unique ways and abilities they poses is very helpful in understanding how chameleon symbolism became and stick for centuries.