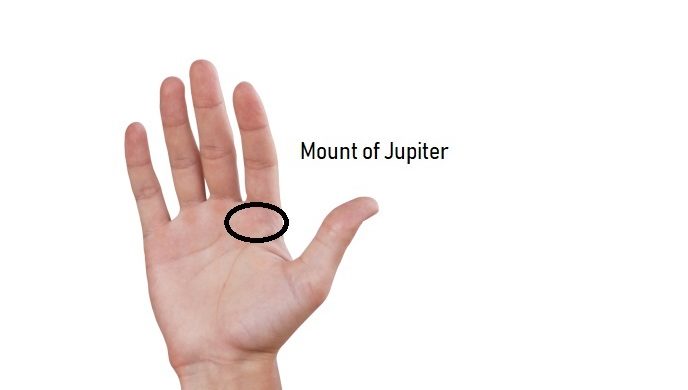 If you are interested in palmistry, then you certainly know that your own palm can tell you a lot about yourself, as well as about your own destiny.

If you would like to know what your palm can tell you about your own life and character, you should pay special attention to all signs and marks that exist on your palm.

This way you will be able to discover something about your personal traits, as well as about your career and future success. It is especially popular to discover what different mounts on your palm can mean.

But, first of all you need to know what types of mounts exist on your palm.

But, before we start talking about its meanings, we have to tell you first where the Jupiter mount is located.

It is placed beneath your index finger and there are many different meanings that we can relate to this mount. We are going to present you now some of its most important meanings.

What Does the Mount of Jupiter Mean?

First of all you need to know that the symbolism of this mount comes from ancient times. 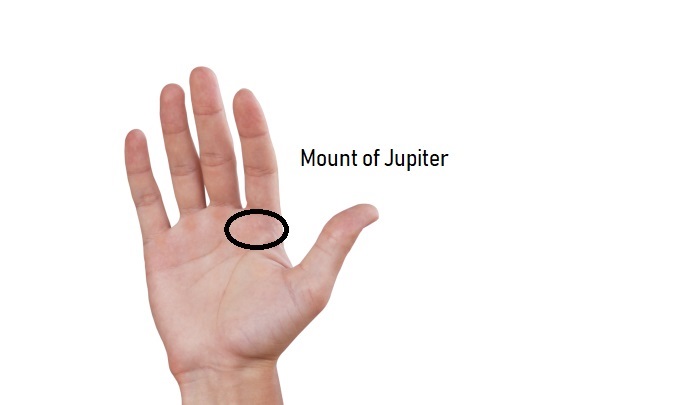 According to this, we can say that there was a strong connection between the Jupiter mount and Zeus, who was God in ancient Greece. In Roman mythology this God was known as Jupiter.

In general, it is known that the Jupiter mount represents your own view of this world and also the way in which other people see you. This mount usually symbolizes power, independence, leadership and control.

Sometimes it can be also a symbol of generosity and compassion. You are going to see now some of the most common meanings that are associated with the mount of Jupiter.

Leadership. As we have just mentioned, it is believed that a Jupiter mount is a symbol of leadership. If your mount of Jupiter is well developed, it probably means that you have great leadership skills.

People in your surroundings respect you and they would like to be just like you. You can be their leader in many situations and you should not miss this opportunity. If you have a well-developed mount of Jupiter, it certainly means that you are someone who likes commanding others and having power over them.

Ambition. Another characteristic that we can associate with the mount of Jupiter is ambition. It means that people who have a well-developed mount of Jupiter are very ambitious and they are usually very successful in politics.

If your mount of Jupiter has a good form and if it is located in the right place, it probably means that people in your society respect you and they admire your ambition and independence.

Loyalty. There is one more characteristic typical for people who have a Jupiter mount well-developed. It is believed that those people are loyal, both to their partners and friends. If your Jupiter mount is well-developed, then you must be a very loyal person and people in your surroundings respect you because of that.

Money. Another important trait related to the mount of Jupiter is money. If your mount of Jupiter has a good form and if it is placed correctly, it is a sign that you know how to earn money and how to spend it. If a man has a well-developed mount of Jupiter, it is believed that he will spend money to attract women in his surroundings.

Domination. It is believed that the mount of Jupiter that is located higher than all other mounts is usually a symbol of domination. It means that a person with such mount likes dominating others and taking control over them.

Also, such people are not very generous and compassionate towards other people, but they are usually self-centered and even egoistic.

These are some of the most common meanings that are typical for the mount of Jupiter. According to all those meanings, there is also the Jupiter type of people.

Those people have most of the characteristics that we have mentioned. You are going to see now what the most common traits of the so called Jupiter people are.

The Most Common Traits of Jupiter People

In this case Jupiter will have a very big influence on your own personality and we are going to tell you now some of your most important characteristics.

It is interesting that the Jupiter mount can tell a lot about someone’s physical appearance. It is believed that a person who has a large Jupiter mount that is located in the right place, is usually not very high, but the height of this person is medium.

Also, Jupiter people have usually strong built and large bones. Their eyes are expressive and their skin is clear and healthy. People with a large Jupiter mount are also fleshy and very strong.

Some of them are even robust, so they look like leaders among other people. Apart from their physical characteristics, the mount of Jupiter can tell a lot about someone’s personal traits.

People with a large and well-developed mount of Jupiter are usually self-confident and independent. They know exactly what they want and nothing can change their opinion.

Even though those people look strong and maybe cold sometimes, it is also said that they are very generous and kind.

In general, we can say that people with a well-developed mount of Jupiter are usually very lucky in life. They are ambitious and they never give up from their goals.

Also, they usually marry in the early age of their life and they have successful and nice marriages.

People whose mount of Jupiter is large and dark pink or red usually enjoy in eating and drinking, but it is also typical for some of them to smoke a lot.

Sometimes they can also eat too much, which could have a bad influence on their overall health.

These are some of the most important traits typical for people who have a well-developed and fleshy Jupiter mount. You could see their both physical and other characteristics.

You are going to see now some of the most common marks and signs that can appear on your Jupiter mount.

Also, you will see their most important meanings.

Signs on the Jupiter Mount

There are many different signs that can appear on your palm. There can be a triangle, a star, a cross, a square and many other signs. It is interesting that each of them has its own symbolism and unique characteristics.

All those signs that we have mentioned can appear on your Jupiter mount as well. You are going to see now what they can symbolize.

You are going to find the right person or you have already found her. Anyway, a cross on the Jupiter mount indicates that your marriage will be very good and you don’t have to worry.

However, it is important to notice if the cross on your Jupiter mount is oversized. If it is oversized, it is a sign that you must be a very ambitious person and you like domination.

Square on the Jupiter mount. If there is a square on your Jupiter mount, it could be a symbol of protection. It could mean that you will be protected from bad things and negative energy.

If you have a square on your mount of Jupiter, it can tell you a lot about your own career as well. It probably means that you have great teaching abilities and you could be a teacher. You have the ability to transfer your knowledge to others.

Star on the Jupiter Mount. If you notice a star on your mount of Jupiter, it is also a good sign.

Actually, it means that you are going to have a lot of success in your life. People who have a star sign on their mount of Jupiter are usually very successful and rich.

Another interesting fact is that the happiest people are those who have both a cross and a star on their Jupiter mounts.

Those people are usually the most influential and the wealthiest in their society.

You have seen in this article all about the mount of Jupiter and its symbolism. We have told you what the most important characteristics of this mount are, so we hope that now you can understand its symbolism.

On the other side, if the Jupiter mount on your palm is oversized or if it is located higher than other mounts, it is probably a sign that you can have some negative characteristics that are typical for Jupiter people.