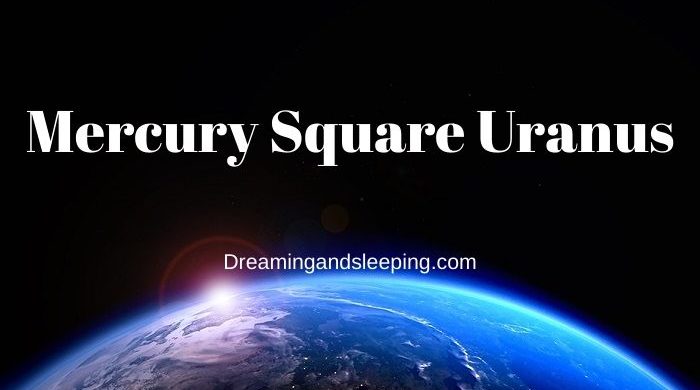 In the context of astrology, you need to know that the square aspect in the natal chart is not the one that you would see as a desirable and in the case when Mercury and Uranus make this connection is very interesting, not just because of their natures that are not as problematic, but more as stimulating at times.

On the one hand, the planet Uranus is such that it brings everything unplanned and unforeseen to the surface, something that doesn’t come right to our minds and power us at the beginning. It is like this planet is showing what our secret powers are.

Mercury is on the other hand, the one planet that speaks of the fast changes and the speed of a mind, and the question is how can something that is deeply hidden, can come to the surface, and that can come very fast? This is the difficulty of this position.

Also, this is the position that makes so much stress, but at the same time, it brings nice things.

In the life of the people who have this aspect, there are many surprises that are in front of their lives.

This is the planetary aspect that brings things that no one could prepare you for, but the main task that these people have is that they are very capable and strong human beings, and they lose a lot when they cannot remain calm and unresponsive.

They need to know that there is nothing that they could do to change what there is in front of them, and they must accept their given way as it is, and all along the way, some kind of control must be maintained.

In this way, those who have this square position will be able to follow their “weird” path and to change people’s lives along the way.

The fact is that they are human beings and sometimes they can adapt to something, to some problematic situations, and quietly exit them – it can come as a surprise to all, even them. 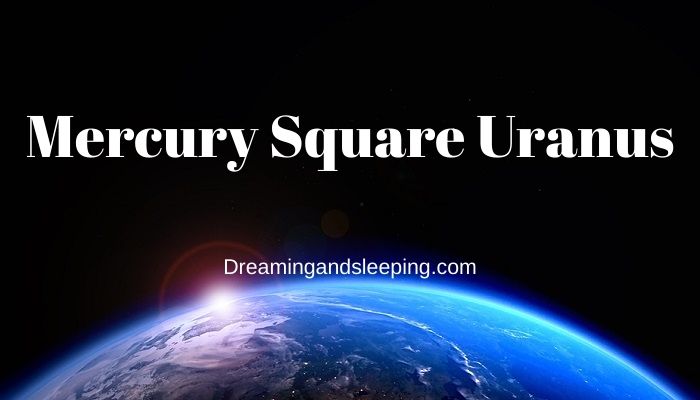 But, on some other occasions, they can react violently and too emotionally both externally and internally, and their lives could be very problematic, maybe even more than they should be.

Some of the famous examples of this aspect  – George Clooney, Justin Timberlake, Burt Reynolds, Heidi Fleiss, Oliver Stone, Dean Martin, Weird Al Yankovic, John Maynard Keynes, Wes Craven, Paris Hilton, Michael Moore and Winston Churchill. As you can see, we tried to give you as many interesting examples as possible, and all of these people lead very different and a bit unique lives.

People, who among some other aspects in their natal chart, are adorned with the square position of Mercury and Uranus are able to have contact with their inner self, and are so intelligent that they could pull themselves from all negative situations and stains if and when they make them.

What is even better, they are able to lead themselves by the strong personal experience that is everything, the good the bad and the ugly. They do not shy away from the negativity.

Every day of their lives is nothing like the day before, and in that sense, there are so many different angles from which they are able to see the world. They are truly resting on this effort, and in most cases, it is the effort that truly pays off.

Persons who have this aspect present in their natal chars have an expressed abstract thinking, a little crazy wit, freaky ideas, they are able to make something out of this craziness and in that sense, they are so much different than others, but, they will have to endure all problems that will come on their way.

In many cases, there is an undeniable intellectual superiority that separates them from others.

Even if that intellect is not used in some, for example, workplace, it is certainly used as a part of social intelligence.

It is said that this aspect is so strong that people who have this aspect in their natal charts – everything can be influenced, the only difference is that the effect will be on different fields of life.

These people have the best time if they are able to stop themselves from making some terrible decisions, but at times they can do it right – but they have to deal with all difficulties that life has put in front of them, and if they are able to do so, their lives will be easier and stop being as usual – different and unbalanced.

It is also important to know that time when these people are showing their cold side to the other people’s need, and they do not want to be touched by their problems, because it will slow them down in their work, but they are also very inconsistent with it.

As a consequence, it often occurs that their environment isolates them, and therefore they are the ones that are not well accepted, and they produce a counter-effect.

Others see them as extremely negative, while others don’t, but the fact is that at times they do not know how to react to others and their needs, and this is a problem.

So, this square position between Mercury and Uranus is also the one that is bringing nervousness, messed up plans, possible unpleasant events, unwanted visits, uncontrolled reactions – it is so much that they should deal.

There is so much strong energy that comes from this square position, and from a good side, people who have it are adorned with the love, emotions, creativity, enjoyment, but in some depth, they are striving toward emotional and material security.

It is also important to know that they do not want to leave a sense of excitement in all personal relations that they are having, whatever the circumstances maybe for them.

But also, it is not like their love life is an easy one – and often when compared with someone else, in synastry, when this square position is present between Mercury and Uranus, then a lot of stress is present.

The advice for all those who have this position, in synastry, it is important to know that they should try to restrain yourself, and try to find inner peace because without it there cannot be any love peace.

Because of this energy that comes from the planet Mercury and Uranus, people who have this aspect have such restless and excited minds, those us at the same time, their biggest aphrodisiac.

It is their way how they become incredibly attractive to others.

Advice for them, if they want to have a solid and firm connection, is that they should not enter in some unnecessary verbal confessions, and what is, even more, they should not come into the unwanted discussions, regardless of how much they want to enter them, and they have that need to say something.

It is also very interesting to look at their love lives seen through their behavior that is often extreme and eccentric behavior. When they love, and when they do not know how to handle themselves, so many reckless actions and decisions are present, and they make much more problems than ever before.

In some general sense, while this hard position is active, all of us should know that our personal lives are in great danger, some relationships are at risk, and what Uranus does best is that it gives us unplanned partings with loved ones and friends, and it is not something that we could deal with easily.

All those who have this aspect in their charts, are undoubtedly great in every form of communication, and all of them could make an amazing career, but they can also ruin their careers in a matter of seconds since they could develop some inner problems.

We are saying that it is not uncommon to be prone to the mental nervousness, and regardless of how amazing they are in communication, it can also be the problem. Some of their ideas will come to the development phase, but there is something that will never be able to work properly.

How this work in reality? They are the ones that dream about some idea, and that idea haunts them a really long time, and it happens that they create that “product” and regardless if it is successful or not, they call for a lot of controversies.

In some cases, they are hated for their progressive way of thinking and their approach to the work.

This aspect also carries possible misunderstandings with colleagues, and in this sense, they should focus on some other things better, and the best advice is that they should think before they say anything. It is also very important that they do not reveal their future plans.

You can understand what are we say here – it is not so much about their work; it is much more about their interpersonal relations at work.

Many will be indiscreet, there will be vanity, and no well-intentioned criticism will be welcomed on the contrary. In some cases, there are some of them that become victims of deserved but also undeserved attacks.

How they deal with such attacks – they could grow stronger and stronger after every attack, and they are fighting with the stubbornness that they own abundantly.

In some less unfortunate cases, they crack under stress and invest their energy somewhere else.

In the end, what should we do if we know that this aspect is present in the sky, it is the aspect of unpleasant surprises, and many of us will make so many wrong decisions? All of us should learn to calm down,

You will know that this square Mercury and Uranus is active because you will feel a lot of nervousness and restlessness, and the best possible way is to try to overcome. You should restrain yourself today and tomorrow, certainly, after that this aspect weakens.

In some extreme cases, we can find some more explosive characters that will truly have some more problems. And all of them are people with nervous characters.

This is the aspect that teaches us that all of us should look deeply into our soul, and deal with whatever lies there, we could find some hidden treasure.

All in all, we should be careful of problems that come at the end of the way, just in the time when we should place our “product” into the “market”; we should be prepared that things can go wrong. But we could also learn that we could start over.